Billy Ray Macon Sr., along with his wife and son, talk with FOX Television Stations about receiving a new high school diploma from West Anchorage High School that had the "met minimum" stamp removed.

ANCHORAGE, Alaska - Billy Ray Macon Sr. has accomplished a lot in his 80 years of living. The retiree has been married for more than 60 years and enjoys spending time with his children, grandchildren and great-grandchildren.

But over time, one thing started to gnaw at him: his high school diploma.

In 1961, Macon graduated from what was then known as Anchorage High School in Alaska. At his graduation, his diploma had a red stamp that read, "This student met minimum state requirements."

"I was more or less glad to get it," the 80-year-old told FOX Television Stations. "I wouldn’t have cared what it had on it as long as it was a diploma." 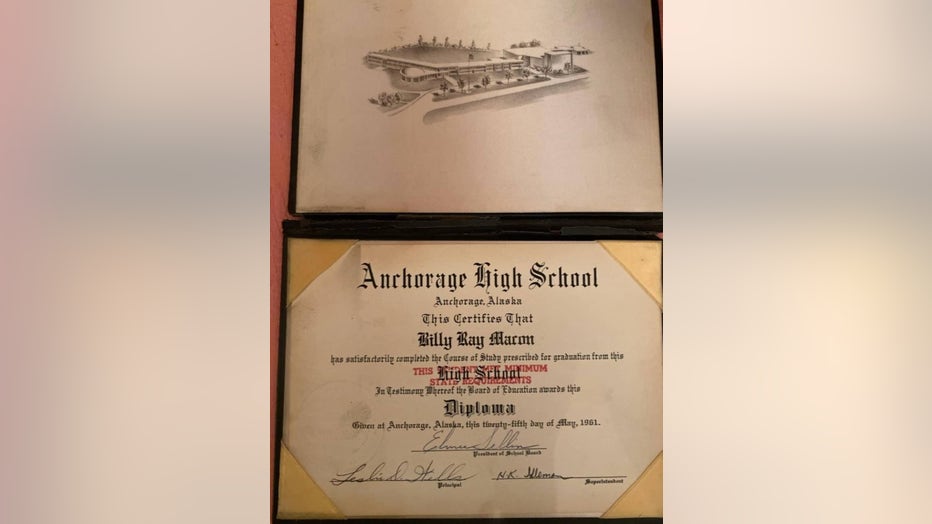 Macon said the comment didn’t bother him at first. He said he was proud to get his high school diploma despite being married, raising a child and expecting a second child. He was only 19 years old. He lived in a one-room shack with a bathroom with no running water, held down part-time jobs, and walked more than an hour to school and back because he didn’t have a car.

"I would walk home from the job and then I tried to sit up at 3:00 in the morning, trying to do homework," he said.

He said the school knew his situation but very few teachers showed sympathy.

Macon went on to hold various jobs including a janitor, car washer and contractor. But his family always expressed their discontent over the stamp on his diploma. 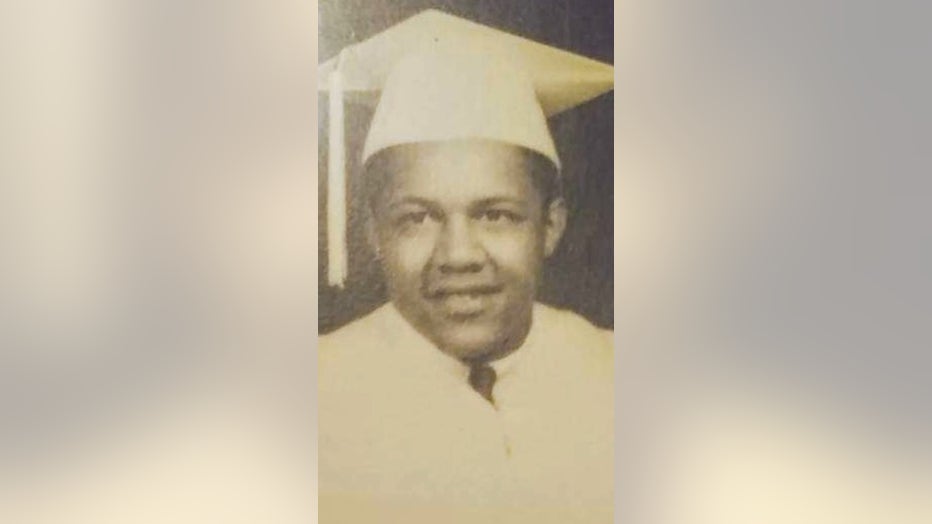 His diploma would have remained as is if it weren’t for his granddaughter, Tafena Timpson, calling out the Anchorage School District in a Facebook post in January. Timpson currently works for the Portland, Oregon school district.

"I was about 10 years old when I first recall grandpa sharing his diploma with me," she posted. "He had it in a drawer of treasures that I was going through. I brought the booklet over to my grandpa and asked what it was, and immediately saw the shame overtake his spirit."

"That stamp, to grandpa, meant that he was a failure," the post continued.

Timpson said she tried to reach the school district multiple times to get the stamp removed from her grandfather’s diploma. After her Facebook post, West Anchorage High School principal Sven Gustafson got in touch with her.

On Macon’s 80th birthday in January, he went to the high school to pick up his diploma.

Billy Ray Macon Sr. as a kid with his mother and family.  (Credit: Tafena Timpson)

Little did he know, the school ended up throwing him a surprise graduation, complete with pomp and circumstance. Macon not only received his new diploma but a yearbook and other memorabilia.

"That was unbelievable," Macon said. "They made all things wrong, they made them right. It was beautiful."

"It was a tear-jerking affair," he continued. "And I enjoyed every minute of it."

"They went above and beyond, and Principal Gustafson single-handedly gave me hope for our world," Timpson also told FOX Television Stations.

"In this situation, I decided my ‘I’ power was to be vulnerable and share a personal harm & trust that there were enough good people in this world to help grandpa get justice," she continued. "My ‘I’ power was to speak up and speak out."

Macon hopes his story will inspire teachers to have compassion for their students.

"Don’t be so fast to wipe everybody off the map," he said.