The Wisconsin Supreme Court ruled that unmanned absentee ballot drop boxes are illegal in the state and that one person cannot drop off another person's ballot.

MILWAUKEE - The Wisconsin Supreme Court on ruled Friday, July 8 that unmanned absentee ballot drop boxes are illegal in the state. The court also ruled that one person cannot drop off another person's ballot.

The ruling means absentee ballot drop boxes will stay shut down. Milwaukee's 15 drop boxes remain covered, as they have been since the Wisconsin Supreme Court allowed a lower court's ruling to take effect in the spring.

In 2020, Wisconsin housed at least 528 absentee ballot drop boxes in both majority Democratic and majority Republican areas.  During that first year of the COVID-19 pandemic, the Wisconsin Elections Commission offered clerks guidance on the use of drop boxes.

The Wisconsin Institute for Law and Liberty (WILL), a conservative law firm, sued – arguing the drop boxes broke a state law that reads: "The envelope shall be mailed by the elector, or delivered in person, to the municipal clerk."

"In the same way we don’t want referees to change the pass interference rules in the middle of a football game, we don’t want departure by unelected bureaucrats from the rules that the legislature specified should govern our elections," WILL's Rick Esenberg said in an interview. 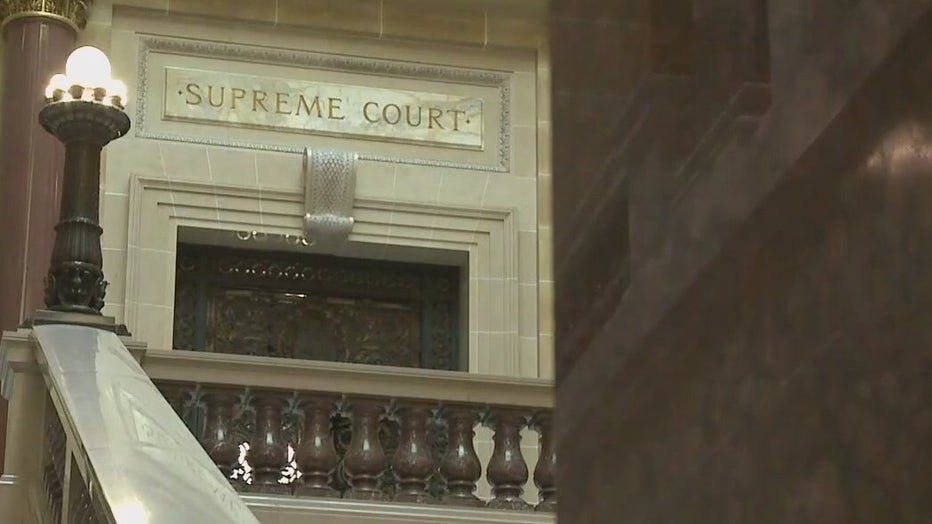 "People want to know their vote counts, and if it’s too close to the election, people are uncomfortable relying on the mail. Drop boxes were actually available until Election Day," said the organization's Barbara Beckert.

The Wisconsin Supreme Court said absentee ballots can either be mailed or personally delivered to the local clerk's office or other designated site – that could be another location staffed by official election workers.

"If the right to vote is to have any meaning at all, elections must be conducted according to law. Throughout history, tyrants have claimed electoral victory via elections conducted in violation of governing law. For example, Saddam Hussein was reportedly elected in 2002 by a unanimous vote of all eligible voters in Iraq."

The dissenting opinion of the court asked: "Can delivery to a drop box constitute delivery ‘to the municipal clerk?’ Absolutely."

The dissent added: "There is nothing in the statute that even hints that unstaffed drop boxes are impermissible."

The Wisconsin Supreme Court did not answer if one person can put another person's absentee ballot in the mail.

The court's ruling may not be the end of the story for Wisconsin absentee ballot drop boxes.

"We will ask the legislature to take action to move that forward," Beckert said.

"A basic but defining feature of our state and our country is the notion that politicians should not be able to abuse their power to prevent eligible voters from casting their ballots or cheat by changing the rules just because they didn’t like the outcome of the last election.

"At the very heart of our democracy is the fundamental right for every eligible voter to be able to cast their ballot—a right that’s far too important to be left to the whims of any politician or political party. We should be working every day to protect that fundamental right by making it as easy as possible for every eligible voter to vote in Wisconsin.

"Today’s decision is another in a long line of Wisconsin Republicans’ successes to make it harder for Wisconsinites to exercise their right to vote, to undermine our free, fair, and secure elections, and to threaten our democracy."

"I’m glad the court today sided with election integrity and affirmed our belief that unmanned drop boxes were illegal. However, to fully restore the integrity of Wisconsin’s elections, we must defeat Tony Evers. Once elected, I’ll work to pass and implement the Michels Election Integrity Blueprint, which will provide greater ballot security and uniformity so that every voter and every vote is treated and tabulated the same across Wisconsin."

"No matter their politics, those who believe in democracy strive to ensure that every eligible voter can cast a ballot. With its ruling today, the Wisconsin Supreme Court is making it more difficult to vote. It’s a slap in the face of democracy itself. We know this decision will impact people with disabilities, seniors, people living in rural communities, people with limited means, few transport options, and inflexible work schedules, who are disproportionately young people and people of color.

"The court’s ruling makes it even more clear that our freedom to vote is under attack. Today’s decision means Wisconsin Democrats will redouble our efforts to make sure every eligible voter is able to cast a ballot. We persevered under these misguided restrictions in spring 2022, and we’re going to win again in November."

"Today is a victory for Democracy and the rule of law. The Wisconsin Elections Commission and clerks in Madison, Milwaukee, Racine, Kenosha and elsewhere broke the law by allowing absentee voting drop boxes and ballot harvesting in 2020, 2021 and 2022.

"Today’s ruling also validates my complaint against the City of Racine for allowing ballot harvesting in the April 2022 election. The Wisconsin Elections Commission should immediately rule on my complaint and sanction the city of Racine for breaking election law. The fact is, Mayor Mason and Clerk Coolidge’s rationale for accepting harvested ballots (that the deliverer was an agent of the voter) has been expressly rejected by the Wisconsin Supreme Court.

"Nothing is found in the statutes concerning absentee voting that indicates legislative disposition to permit the absentee ballot to be delivered by agent. Reading the election statutes in context and as a whole, we conclude an absentee ballot delivered in person under Wis. Stat. §6.87(4)(b)1. must be delivered personally by the voter. Unlike Wis. Stat. § 6.86, which allows the receipt of an absentee ballot through an agent under particular circumstances and subject to detailed procedures, no similar language authorizes voters not meeting the exceptions outlined under § 6.86 to cast a ballot through delivery by an agent. (Internal citations omitted.)

"Today’s ruling does not mean voters should not remain vigilant in monitoring the elections in August and November. On the contrary, it is more important than ever that citizens make sure our laws are followed to ensure fair elections."

Karyn Rotker, a senior staff attorney for the ACLU of Wisconsin

"The Wisconsin Supreme Court’s decision to ban drop boxes and restrict ballot return assistance amounts to yet another senseless attack on our voting rights that will result in even greater disenfranchisement of eligible voters in our state. Drop boxes have proven to be an accessible, secure, and easy way for voters across the country to cast their ballots, and they have been widely used by people of all backgrounds and political affiliations without issue. In 2020, more voters returned their ballots at a drop box than ever before, helping spur record-breaking voter turnout in Wisconsin.

"The Court's elimination of in-person ballot return assistance means that friends or family members cannot even return a person's ballot to the clerk's office for them. This is devastating, especially to voters with disabilities and people who face other barriers to leaving their homes. Restricting ballot return assistance limits voter access for all Wisconsinites, but it’s outright disenfranchising for people who might be barred from election-day voting.

"This ruling is yet another loss for the voters of Wisconsin and another win for the elected officials who have long employed voter suppression tactics to erode our ability to vote, making Wisconsin increasingly anti-democratic.

"While today’s announcement unfortunately means that Wisconsin voters will have fewer options available for voting, we strongly encourage those who are eligible to still vote in the upcoming election this August. You can start getting ready now by making sure you’re registered to vote, requesting an absentee ballot, finding your polling place, and getting informed about the candidates on your ballot. You can also get involved by volunteering to be a poll worker."

"Today’s ruling is a massive victory for election integrity. Democrats have long abused the practice of ballot harvesting, which undermines voter confidence by interfering with the appropriate chain of custody of ballots – but with today’s decision, they’ll be forced into a fair fight that holds them accountable for their record."

"In 2020, Milwaukee successfully used drop box locations at alternate voting sites to allow residents to cast their ballots safely and securely during a global pandemic. Even in a public health crisis, residents deserve access to the ballot box and the right of every eligible voter to cast their vote must be protected. Today, the Wisconsin Supreme Court undermined that central tenant of our democracy by making it harder for residents to exercise their right to vote. This ruling continues a disgusting tradition of attacking the voting rights of people who’ve historically been kept out of the voting booth due to intimidation, violence, and racial discrimination in voting laws. Furthermore, it reduces options to cast a ballot for residents with disabilities and mobility issues who cannot personally mail a ballot or visit their clerk’s office.

"Today’s ruling is an affront to Milwaukee County’s mission and vision to achieve race and health equity. When residents can’t have their voices heard they can’t hold their leaders accountable and make sure their government is meeting their needs. Now, more than ever, state leaders should be working to expand voting access and making it easy for every eligible voter to participate if they choose. As a believer in safe, secure, free, and fair elections I will never stop fighting to increase access to the ballot box and strengthening our democracy."

"This decision provides substantial clarity on the legal status of absentee ballot drop boxes and ballot harvesting. While the question of whether an agent may mail an absentee ballot remains open, Wisconsin voters can have confidence that state law, not guidance from the Wisconsin Elections Commission, has the final word on how Wisconsin elections are conducted."

"This unfortunate and erroneous decision from the Wisconsin Supreme Court today impedes democracy, but my office will work closely with municipalities to ensure as much access to the polls as possible, within the limits of the law," said Milwaukee County Clerk George L. Christenson. "Drop boxes have been widely utilized across our country for years. They are monitored, secure, and provide citizens a way to cast their ballot safely."

"We applaud the Wisconsin Supreme Court for upholding the law and its protections against vote trafficking and unstaffed drop boxes. Today’s Supreme Court's decision was based solely on an interpretation of the law, and leaves the State Legislature in charge of governing Wisconsin elections. We proudly filed an Amicus Brief earlier this year urging the Court not to deviate from the plain text of the statute. Writing law is the job of the Legislature, not the courts or bureaucrats. This is a win for every voter, for democracy, and helps ensure it will be easy to vote and hard to cheat in Wisconsin."