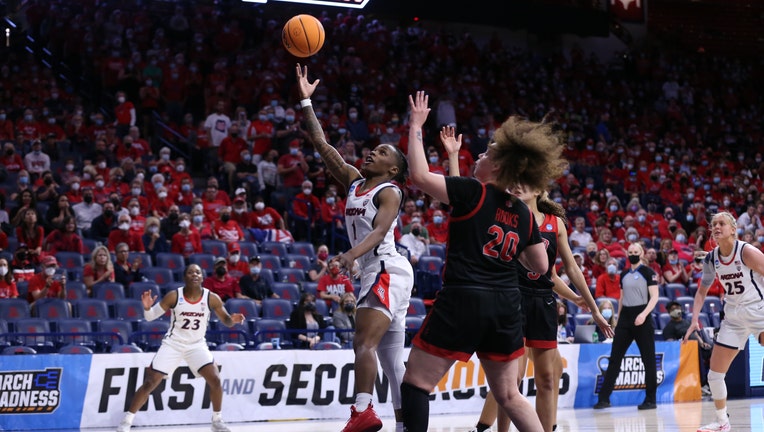 Shaina Pellington (#1) drives to the basket during the first round of the 2022 NCAA Women's Basketball Tournament held at the McKale Center on March 19, 2022 in Tucson, Arizona. (Photo by Simon Asher/NCAA Photos via Getty Images)

TUCSON, Ariz. (AP) - Arizona looked like the inexperienced team early, not one that played for a national championship a year ago. Even when the Wildcats shook off the jitters, they had a hard time pulling away from UNLV.

Pellington and Reese scored all but two of Arizona’s points in the fourth quarter, leading the Wildcats to a gritty 72-67 win over UNLV on Saturday night in the opening round of the women’s NCAA Tournament.

Pellington finished with 30 points and Reese had 16 after missing the previous three games with a separated shoulder.

"When the game was on the line, we needed to come together as a team and get some stops," said Pellington, who had four assists and four steals. "We needed to connect stops with scores and that’s what we did."

The Wildcats (21-7), the No. 4 seed in the Greensboro Region, were jittery early in their first home NCAA Tournament game since 1998, when coach Adia Barnes was still playing. Arizona bounced back after Barnes went deep into her bench — 11 players in the first half — but had a hard time shaking UNLV even as the McKale Center crowd roared.

Two of Arizona’s best players were the difference down the stretch.

Taking turns late, Pellington and Reese keyed a 15-3 run and combined for 22 fourth-quarter points to send the Wildcats into Monday’s second round against North Carolina.

"It could be ugly, it could be whatever, but a win’s a win and this is a good way to start," Barnes said.

The 13th-seeded Lady Rebels (26-7) didn’t flinch in their first NCAA Tournament appearance since 2002, drowning out the crowd noise to go right at last year’s national runner-up.

The Mountain West Conference regular-season and tournament champions dominated early and went toe to toe with the Wildcats, taking a three-point lead after three quarters. The bid for the upset went up in flames in the fourth quarter, when the Lady Rebels succumbed to Arizona’s pressure, turning it over 10 times.

"I think we made them really nervous," UNLV coach Lindy La Rocque said. "We left it all over there and they felt it. This one obviously stings, but it adds fuel to the fire."

Arizona earned the right to host the first two rounds of the NCAA Tournament last season, only to lose it when the entire bracket was moved to San Antonio because of the pandemic.

The Wildcats earned another shot by getting a top-4 seed in this year’s field of 68, and the McKale Center crowd let loose all that pent-up energy.

The deafening sounds didn’t seem to bother the Lady Rebels.

UNLV rattled the Wildcats defensively, holding them to 3-of-15 shooting, and aggressively went to the basket on offense to lead 14-9.

"They were getting basically whatever they wanted," Pellington said.

The Wildcats got the message, turning up their energy — and the crowd. Led by Pellington, Arizona shot 9 of 13 in the second quarter to take a 31-29 halftime lead.

The Wildcats kept scoring to start the third, but the Lady Rebels wouldn’t back down. UNLV hit eight of 12 shots — Alyssa Durazo-Frescas even banked in a 3-pointer — and closed with a 7-0 run to lead 53-48.

Arizona finally got its mojo back in the fourth quarter, opening with an 8-0 spurt to go up 56-53. The Wildcats kept the run going and shut down the Lady Rebels the rest of the way, finally ending the upset bid.

"Their size and strength and athleticism I do think kind of wore us down, just wore us down mentally, physically," La Rocque said. "That kind of overwhelmed us in the fourth quarter."

UNLV held its own in the program’s first NCAA Tournament appearance in 22 years. A loss, but a good foundation has been set in La Rocque’s second season.

Arizona was jittery early and had all it could handle with UNLV, but found a way to win. The Wildcats know they’ll need to be better to have a chance against North Carolina on Monday.

Sisters Sam and Jade Thomas played against each other for the first time, though in much different roles.

Sam, a senior, is one of Arizona’s leaders and played 35 minutes. Jade, a sophomore backup, only saw action in the closing seconds.

"It was nice to see her go in, my family was obviously happy," Sam Thomas said.