According to NASA’s JPL, the giant space rock known as 2019 TA7 will skim past Earth at a distance of roughly 930,000 miles, making its closest approach to Earth in nearly 115 years.

LOS ANGELES - While stargazers got the chance to see the pleasant sight of the Full Hunter’s Moon over the weekend, a massive 111-foot asteroid that’s expected to skim uncomfortably close to Earth Monday night is a stark reminder that outer space can be dangerous.

According to NASA’s JPL, the giant space rock known as 2019 TA7 will skim past Earth at a distance of roughly 930,000 miles, travelling roughly 22,500 miles per hour at approximately 6:53 pm ET on Monday.

The asteroid, which was first observed last week on Oct. 9, is going to be making its closest approach to Earth in nearly 115 years. 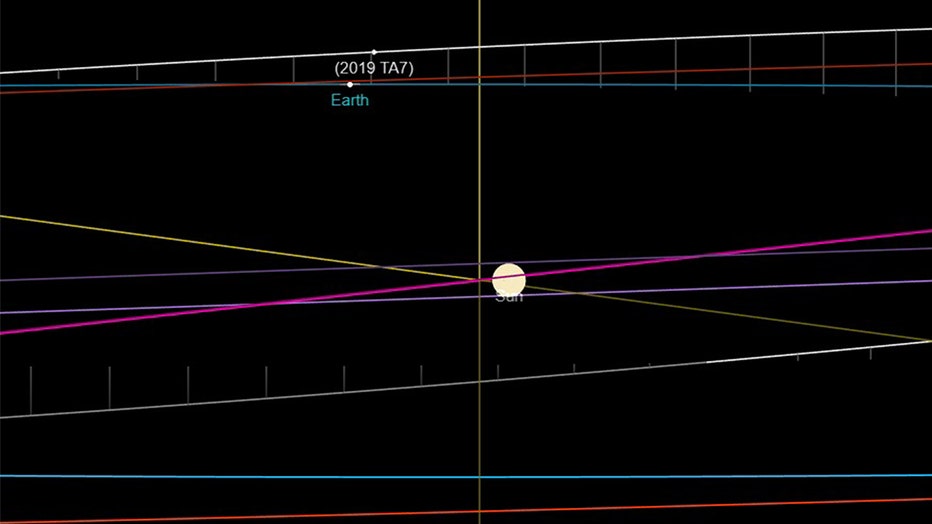 An orbital diagram from NASA's JPL shows just how close 2019 TA7 will approach Earth at approximately 6:53 pm ET on Monday.

But doomsday preppers need not kick things into overdrive, since the size of the asteroid shouldn’t come as a concern to our species.

At nearly twice the size of the infamous Chelyabinsk meteor, it will most likely burn up most of its mass in Earth’s atmosphere — but that doesn’t mean it’s completely harmless.

As many may remember, On Feb. 15, 2013, a 65-foot meteor crashed into a small city in Russia called Chelyabinsk, resulting in the damage of 7,200 buildings and leaving 1,500 people injured.

While 2019 TA7 is making is closest pass by in nearly a century, it’s not nearly as close as the “city killer” that came within 43,500 miles of Earth in July, closer than the distance of the moon.