Several explosions were set off on Wednesday in Pinal County. Why? A training exercise called the "Raven's Challenge" was put on by the Bureau of Alcohol, Tobacco, Firearms and Explosives.

PINAL COUNTY, Ariz. - Several explosions were set off on Wednesday in Pinal County, but all for a good reason. A training exercise called the "Raven's Challenge" was put on by the Bureau of Alcohol, Tobacco, Firearms and Explosives (ATF).

Through five trainings a year for the dangerous trade, they teach bomb technicians tricks, tools and team-building skills.

Technicians come here from across the country and around the world. They learn what to look for, how to handle and how to investigate explosive situations.

Each scenario is modeled after real-world situations, with a few that are made up.

"What you’re about to see is what we don’t want to happen. But if it does happen, and it sometimes does, then we go into the post-blast investigation mode," explained Johnny Green with ATF. 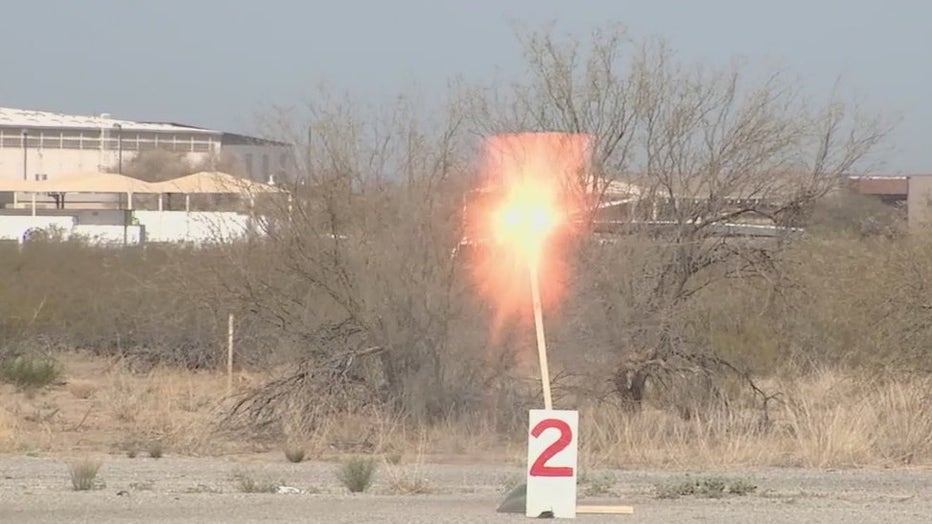 The exercises include bombs in tunnels, buildings, trains, buses and airplanes.

One of the exercises was based on a recent event in Australia, which was a suspicious bag in the overhead compartment of an airplane.

"This gives him the uptake to work on an airplane. Most of them don’t get that unless they work at an airport or near one," explained Mike Eggleston, Raven’s Challenge instructor.

What’s considered an emerging threat? Bombs in ATMs. The threats are up 400% in recent years. Demonstrators didn’t show this exercise, saying it would be like giving a potential crook your PIN number.

Some technicians are rookies and others are sharpening their skills. They're learning anything from putting on a bomb suit, to working with robots, how to remove and dismantle a bomb and set off a small explosion to prevent a large one.

"What are the explosives and devices we recover, what are the containers they are in and how do we deploy countermeasures," Green said.