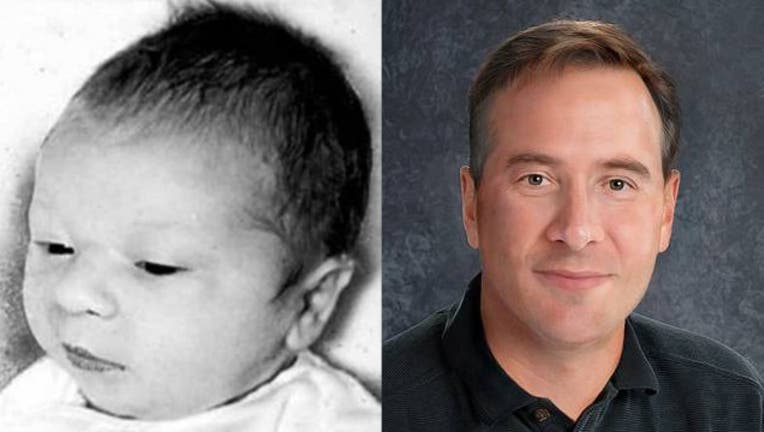 An age-progression image, right, shows what Paul Fronczak, who was abducted from a Chicago hospital in 1964, left, might look like today. (MissingKids.com)

CHICAGO - A baby named Paul Fronczak who famously was kidnapped one day after he was born at a Chicago hospital in 1964 reportedly has been found living in rural Michigan under another identity.

Paul Fronczak, according to WGN, only found out in recent months that he was the newborn swiped from Michael Reese Hospital more than five decades ago. He told the station that he has been contacted by FBI agents – who reopened the investigation in 2013 – and is still coming to terms with the news.

“I have loose ends to tie up,” he said to WGN. He didn’t say whether he planned to meet his biological mother, Dora. His father died years ago.

Fronczak initially disappeared on April 26, 1964, after a woman posing as a nurse entered his mother’s hospital room and took him away, saying she needed to bring the infant to a doctor.

Hundreds of police officers and FBI agents then searched for the Oak Lawn couple's newborn son after his abduction. The case came to an apparently happy end more than a year later when an abandoned child resembling the Fronczak's baby was found in New Jersey and returned to them.

Yet, the boy from New Jersey, who now also is named Paul Fronczak, underwent DNA testing in 2013 and discovered that he wasn’t the biological son of Chester and Dora Fronczak. He told the Chicago Tribune that year that he had long wondered why he didn't resemble the people he believed were his parents.

He is a married father who works as a college administrator and lives in Henderson, Nev.

“I really feel in my heart that the real Paul Fronczak is alive and well and out there, and nothing would make me more happy in this life than to find the real kidnapped child and, at the same time, I wouldn’t mind finding out who I am,” the Nevada-based Fronczak had told the Chicago Tribune in 2013.

The FBI decided that year to reopen its probe into Fronczak’s disappearance, after locating original evidence files from the 1964 investigation.

The National Center for Missing and Exploited Children also released an age progression image of what the real Paul Fronczak may look like now.

The Michigan-based Fronczak told WGN that he is aware of evidence concluding that he is the baby abducted in 1964.

FBI investigators declined to comment this week on whether or not the case is now closed.