President Joe Biden welcomed 21 immigrants from 16 countries as the newest United States citizens in a ceremony in the East Room.

WASHINGTON - President Joe Biden welcomed 21 immigrants from 16 countries as the newest United States citizens in a naturalization ceremony in the East Room of the White House Friday afternoon.

Homeland Security Alejandro N. Mayorkas administered the Oath of Allegiance before addressing the new citizens. He told them of his family’s experience immigrating to the United States as political refugees from Cuba.

He concluded his remarks by introducing the president.

"Today’s special guests, it’s my honor to congratulate the 21 of you," Biden said. "You’ve each come to America in different circumstances, different reasons and 16 nationalities. And like previous generations of immigrants, there’s one trait you all share in common: courage." 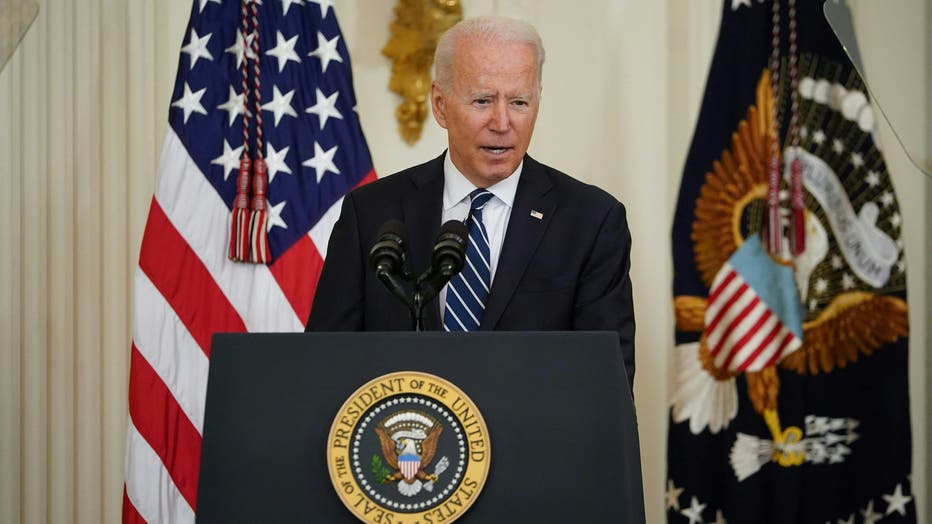 President Joe Biden speaks during a naturalization ceremony for new citizens ahead of Independence Day in the East Room of the White House in Washington, DC on July 2, 2021. (Photo by MANDEL NGAN/AFP via Getty Images)

Biden recognized the commitment and contributions immigrants make to the United States. He spoke about a naturalization ceremony he conducted inside one of Saddam Hussein’s "gaudy mansions" in which several soldiers became American citizens.

And he thanked the many immigrants who’ve been front-line workers and the COVID-19 heroes who have played a critical role in helping America respond to and recover from the pandemic.

Friday’s ceremony was just one of the 170 naturalization ceremonies being held in honor of Independence Day. The U.S. Citizenship and Immigration Services (USCIS) will naturalize more than 9,400 new citizens between June 30 and July 7.

"This year marks the 245th birthday of our Nation," Acting USCIS Director Tracy Renaud said in a news release. "We are committed to promoting policies and procedures that ensure we operate fairly and efficiently, and continue to encourage and embrace the full participation of the newest Americans in our democracy."

Other ceremonies will take place across the country. One of them even took place Wednesday in Okinawa, Japan. Mayorkas virtually administered the Oath of Allegiance to 22 military service members serving overseas.