Tigers rescued from a circus in Guatemala got to explore their new enclosures at Big Cat Rescue.

CITRUS PARK, Fla. - Some tigers activists say three tigers were used and abused as part of traveling circuses in Central America -- and they arrived at Tampa's Big Cat Rescue Monday.

“These animals were horribly treated in the circus, and so it was just really gratifying to have them arrive,” said Howard Baskin, one of the trustees at the facility in Citrus Park.

More than 80 cats from around the world that aren’t able to live in the wild are housed here.

The three tigers, Max, Kimba, and Simba, all adult males, were trailered from Miami International Airport following inspections by federal wildlife officials and Homeland Security. They were among 15 tigers freed from Guatemala by Animal Defenders International. 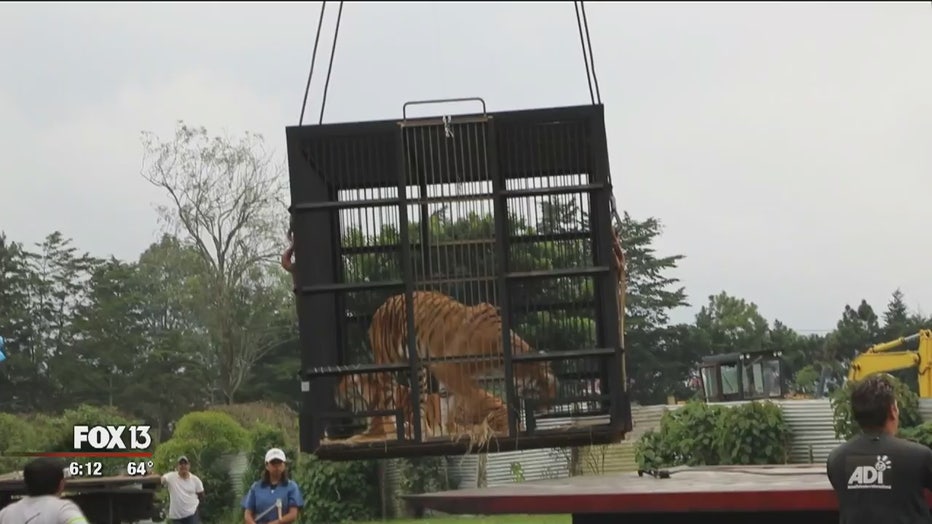 One of the tigers made international news when he attacked a keeper and severed his arms. That cat is among a larger group being sent to South Africa.

Baskin said the mauling resulted from hunger and abuse. He said tigers cannot be trained for circus performances except through abuse.

“Which is just a miserable life for the animals,” said Baskin. “They spend most of their time in a tiny cage. Tigers do not want to perform.”

He said Big Cat Rescue has spent $85,000 on the three tigers since they began working with Animal Defenders International in 2018.

The three were transferred to their new enclosures Monday afternoon. They seemed to survey their new surroundings, possibly the largest homes they have ever known.

Visitors will be able to see the new tigers on regular tours which can be scheduled on Big Cat Rescue’s website.