Feb. 1 marks the official start of Black History Month 2022, which this year aims to focus on the multiple facets of "Black Health and Wellness" — a theme underscoring the rich legacy of everything from Black scholars, medical practitioners and midwives, to more recent initiatives focused on mental health for people of color.

The annual celebration throughout the month of February honors achievements by Black Americans and aims to serve as a time to specifically recognize and salute their central role in U.S. history. It’s considered one of the nation’s oldest organized history celebrations.

The theme for Black History Month is chosen each year by the Association for the Study of African American Life and History (ASALH), an organization dedicated to researching and promoting achievements by Black Americans and other peoples of African descent.

This year’s them is also intended to reflect on "activities, rituals and initiatives that Black communities have done to be well," the ASALH said.

How did Black History Month start?

Carter G. Woodson, a founder of the ASALH organization, first came up with the idea of the celebration that became Black History Month.

Woodson, born in 1875 to recently freed Virginia slaves, went on to earn a Ph.D in history from Harvard. He worried that Black children were not being taught about their ancestors’ achievements in American schools in the early 1900s.

"Woodson fervently believed that Black people should be proud of their heritage and all Americans should understand the largely overlooked achievements of Black Americans," the NAACP states on its website.

Woodson originally came up with the idea of Negro History Week to encourage black Americans to become more interested in their own history and heritage and it was established in 1926.

Why is Black History Month in February?

Woodson chose February for Negro History Week because it had the birthdays of President Abraham Lincoln and Frederick Douglass. Lincoln was born on Feb. 12, and Douglass, a former slave who did not know his exact birthday, celebrated his on Feb. 14.

The first Negro History Week was announced in February 1926.

When did the celebration expand from a week to a month?

Individually several places, including West Virginia in the 1940s and Chicago in the 1960s, expanded the celebration into Negro History Month, according to the Associated Press. The civil rights and Black Power movement advocated for an official shift from Black History Week to Black History Month.

In 1976, 50 years after the first celebration, the ASALH officially shifted from a week to a month and from "Negro history" to "Black history." Since the mid-1970s, every U.S. president — Democrat and Republican — has issued proclamations honoring the spirit of Black History Month and endorsing the organization’s annual theme.

When Woodson established Negro History week in 1926, he realized the importance of providing a theme to focus the attention of the public. The 2021 theme focused on "The Black Family: Representation, Identity, and Diversity."

"The intention has never been to dictate or limit the exploration of the Black experience, but to bring to the public’s attention important developments that merit emphasis," the ASALH explains on its website.

With the Black Health and Wellness theme, the ASALH notes how Black people throughout history have embarked on "self-determination, mutual aid and social support initiatives" to build certain community clinics, hospitals and medical and nursing schools.

It noted Meharry Medical College, Howard University College of Medicine, Provident Hospital and Training School and Morehouse School of Medicine as examples of institutions that have aimed to provide spaces for Black people "to counter the economic and health disparities and discrimination that are found at mainstream institutions," the organization said. 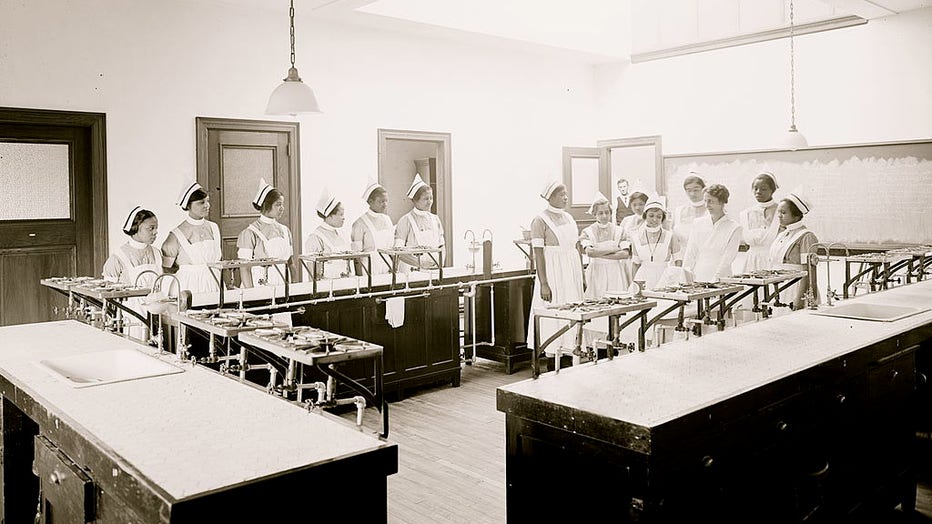 FILE - CIRCA 1915: A Howard University nursing class is pictured in an archive image from 1915. (Photo by Buyenlarge/Getty Images)

The ASALH said other initiatives to help lessen disparities have led to more diverse practitioners and representation in medical and health programs such as the Ronald E. McNair Scholars, a U.S. Department of Education program that aims to increase graduate degree awards for students from underrepresented societal groups.

The Black History Month 2022 theme also aims to highlight how Black health and wellness is now broader and more nuanced in the 21st century. The organization noted the development of podcasts like "The Read," hosted by Crissle and Kid Fury, which has "normalized talking about mental health and going to therapy."

"More of us understand the need to hold down, lift up, center, and fight fiercely for our beloved trans siblings and family," the ASALH said. "Black girls are doing breathwork, and there are whole yoga studios dedicated to people of color."

It continued: "... Black communities must look to the past to provide the light for our future, by embracing the rituals, traditions and healing modalities of our ancestors."