EXPLICIT LANGUAGE AND VISUAL WARNING The Volusia County Sheriff's Office released body cam of the home invasion where they apprehended three armed suspects, rescued five adults left tied up in the garage, and brought a young girl founding hiding inside the home to safety.

DELTONA, Fla. - Body camera video has been released of Florida deputies interrupting a home invasion where they apprehended three armed suspects, rescued five adults left tied up in the garage, and brought a seven-year-old girl founding hiding inside the home to safety.

The Volusia County Sheriff's Office said the home invasion happened on Saturday on Eden Drive. The suspects apparently approached the open garage of the home and confronted two victims, pointing guns at them and demanding that they empty their pockets.

They said that the armed suspects then entered the home, retrieving other adult victims and bringing them to the garage, where they tied their hands and made them sit down.

MORE NEWS: Bundle up! Coldest air of the season arrives in Central Florida

Deputies were reportedly called to the scene as the incident was in progress. Upon arrival, the deputies heard victims screaming in the garage and observed suspects inside, rummaging through the home. At least one man was spotted with a rifle.

Deputies ushered the victims safely away from the home and set up a perimeter around the scene, the Sheriff's Office said. They were then alerted that a seven-year-old child was hiding in the house.

Deputies were said to have then entered the home, looking for more suspects, and found none. They reportedly fled the house after finding out that someone inside the home called 911. Deputies found the child, who was unhurt, and took her safely to her parents. The victims in the home invasion suffered minor injuries.

However, the fleeing suspects did not get far, as one was arrested in the driveway and two in the backyard, deputies said. They have been identified as 30-year-old Jermaine Oliver, 39-year-old John Anderson, and 32-year-old Derrick Mathis. 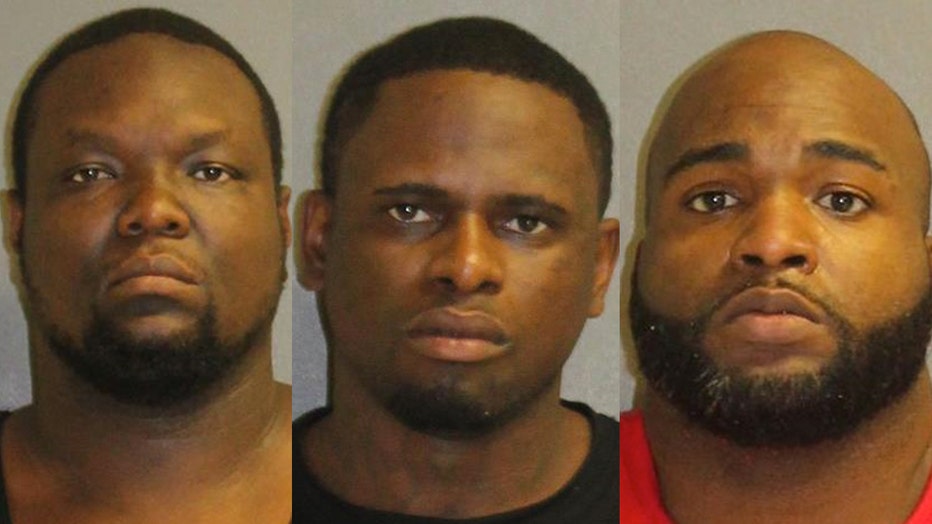 They are reportedly being held in jail on no bond.