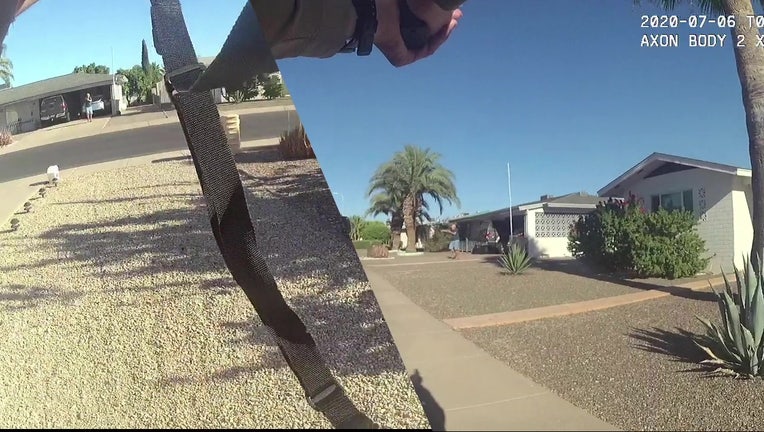 MESA, Ariz. - Days after a shooting involving deputies with the Maricopa County Sheriff's Office in Mesa took the life of a 70-year-old man, officials with MCSO have released body camera video from the incident on July 9.

The incident happened just after 6:00 p.m. on July 5, when deputies responded to a home northeast of the intersection of Higley Road and University Drive, after a woman reported that her husband, 70-year-old Rodney Liveringhous, was acting erratically.

Officials said when deputies arrived at the scene, they heard a gunshot and Liveringhouse came out of his home armed with two guns. Liveringhouse reportedly refused deputies' demands to drop the weapons and was shot after pointing the guns at deputies. Liveringhouse was taken to a hospital, where he later died.

The video was revealed by Maricopa County Sheriff Paul Penzone.

"You will hear a gunshot. It is Mr. Liveringhouse inside the home, shooting out the window directly behind our deputy, within maybe ten feet of where he was," said Sheriff Penzone.

In the video, deputies were heard telling Liveringhouse to put his hands up, before gunshots were heard. Moments after the shooting, a deputy tried to use life-saving measures.

According to deputies, Liveringhouse was armed with two handguns: one that was fully loaded and one that was unloaded. Authorities served a search warrant, and found more weapons inside the home. In all, six different firearms and more than 4,500 rounds were recovered from the scene.

"There were hundreds of rounds of ammunition, several other firearms that were recovered inside the home," said Sheriff Penzone. He went on to say that lethal force had to be used in the situation, in order to stop the threat and protect nearby residents.

"If we were to try to aim for arms or guns, I'll just be frank with you, I've been in this business a long time. It is extremely difficult at best that bullet continues, which means everyone else in that neighborhood, every other home is now vulnerable," said Sheriff Penzone.

Deputies were initially responding to the home after a woman reported that her husband was acting strangely.