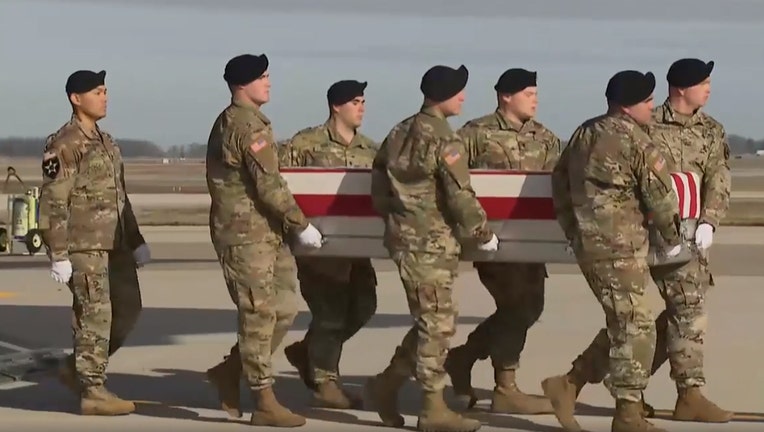 U.S. service members carry a casket containing the remains of Sgt. 1st Class Michael J. Goble from a transport plane to a van at Dover Air Force Base in Delaware, Dec. 25, 2019.

The remains of a Green Beret from New Jersey who was killed in combat in Afghanistan have been returned to the United States, the AP reported.

The military conducted what it calls a Dignified Transfer of Remains ceremony for Goble at Dover Air Force Base in Delaware on Christmas Day.

Wearing white gloves, six uniformed service members carried a flag-draped casket off a cargo plane and into a van as other service members and U.S. officials—including National Security Adviser Robert O'Brien and Army Gen. Mark A. Milley, the chairman of the Joint Chiefs of Staff—watched in silence and then saluted.

The Pentagon said Goble's unit was engaged in combat operations in northern Kunduz province on Monday when a roadside bombing killed him. The Taliban claimed responsibility for the attack.

Goble was assigned to 1st Battalion, 7th Special Forces Group (Airborne) based out of Eglin Air Force Base in Florida. 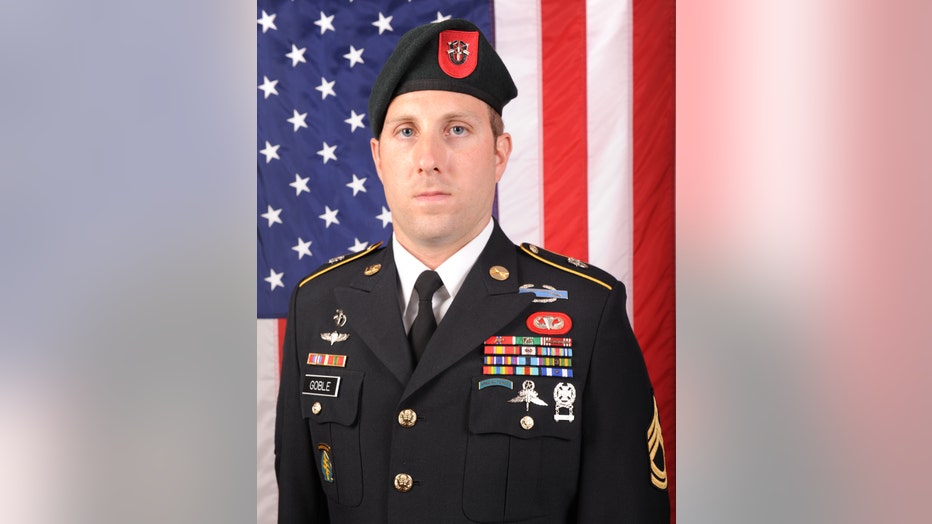 "Sgt. 1st Class Goble was more than just a member of the 7th Special Forces Group, he was a brother to us, and a beloved family member to the Northwest Florida community," Col. John W. Sannes, the commander of the 7th Special Forces Group, said in a statement. "We will honor our brother's sacrifice and provide the best possible care to his family. We ask that you keep his Family and teammates in your thoughts and prayers."

Goble left behind his partner, Jennifer Albuquerque, their daughter, Zoey, and his mother and father.

An online fundraiser in his honor has garnered nearly $90,000, according to NorthJersey.com.

"The last thing she needs to worry about is money; all donations will go directly to Jennifer Albuquerque to take care of herself and Zoey," Lisa Barker, the organizer of the GoFundMe, wrote on the donation page. "Let's do what we can to support this family, and do right by Mike."

Goble was then assigned as a Weapons Sergeant to Company C, 1st Battalion, 7th SFG (A). He deployed to Afghanistan March through October 2007 and May 2008 through January 2009; Argentina in 2009; Guatemala in 2010; Colombia in 2011. Goble served as a Sniper Instructor from March 2012 through January 2016, and returned Company C, 1st Battalion, 7th SFG (A) as a Senior Intelligence Sergeant. From April thru May 2018, he deployed to the Republic of Korea, then to Colombia from July through September 2018.

He is survived by his mother Joy, his father Randell, his girlfriend Jennifer, and their daughter.