Breonna Taylor update: Officers arrested for lying on search warrant that lead to her death

Following an investigation into the death of Breonna Taylor, the Justice Department has arrested 4 Louisville Metro Police officers on federal charges for lying on a search warrant that lead to her death. The officers knowingly provided false and misleading statements on the probable cause affidavit to obtain the search warrant and then tried to cover it up after the fact. Taylor was killed as officers executed the search warrant, in which she was not a target.

LOUISVILLE, Ky. - The U.S. Justice Department announced civil rights charges Thursday against four Louisville police officers over the drug raid that led to the death of Breonna Taylor, a Black woman whose fatal shooting contributed to the racial justice protests that rocked the U.S. in the spring and summer of 2020.

The charges are another effort to hold law enforcement accountable for the killing of the 26-year-old medical worker after one of the officers was acquitted of state charges earlier this year.

"Breonna Taylor should be alive today," he said. The charges range from unlawful conspiracies, use of force and obstruction of justice, Garland said.

The charges are against former officers Joshua Jaynes, Brett Hankison and Kelly Goodlett, along with Sgt. Kyle Meany. 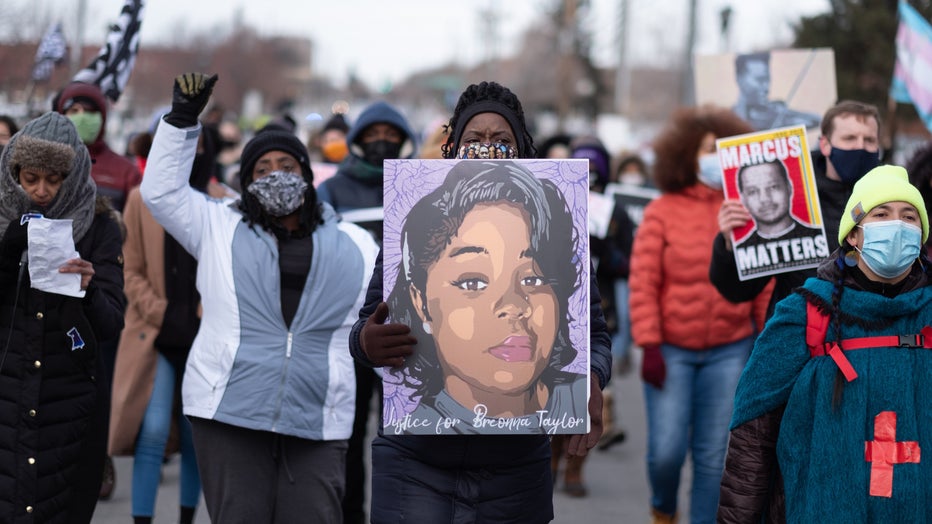 A protester holds a poster of Breonna Taylor, who was killed by in her own home Louisville police. St. Paul, MN. January 18, 2021. (Photo by Tim Evans/NurPhoto via Getty Images)

Local activists and members of the Taylor family celebrated the charges and thanked federal officials.

"This is a day when Black women saw equal justice in America," lawyer Benjamin Crump said.

Some of Taylor’s family and other supporters gathered in a park downtown Thursday and chanted "Say her name, Breonna Taylor!"

Taylor's mother, Tamika Palmer, said she has waited 874 days for police to be held accountable.

"Today’s overdue but it still hurts," she said Thursday. "You all (are) learning today that we're not crazy."

Taylor was shot to death by Louisville officers who had knocked down her door while executing the search warrant. Taylor’s boyfriend fired a shot that hit one of the officers as they came through the door and they returned fire, striking Taylor multiple times.

In the protests of 2020, Taylor's name was often shouted along with George Floyd, who was killed less than three months after Taylor by a Minneapolis police officer in a videotaped encounter that shocked the nation.

Garland said the officers at Taylor’s home just after midnight on March 13, 2020, "were not involved in the drafting of the warrant, and were unaware of the false and misleading statements." Hankison was the only officer charged Thursday who was on the scene that night.

Hankison was indicted on two deprivation of rights charges alleging he used excessive force when he retreated from Taylor’s door, turned a corner and fired 10 shots into the side of her two-bedroom apartment. Bullets flew into a neighbor’s apartment, nearly striking one man.

He was acquitted by a jury of state charges of wanton endangerment earlier this year in Louisville.

A separate indictment said Jaynes and Meany both knew the warrant used to search Taylor’s home had information that was "false, misleading and out of date." Both are charged with conspiracy and deprivation of rights.

Jaynes had applied for the warrant to search Taylor’s house. He was fired in January 2021 by former Louisville Police interim chief Yvette Gentry for violating department standards in the preparation of a search warrant execution and for being "untruthful" in the Taylor warrant. 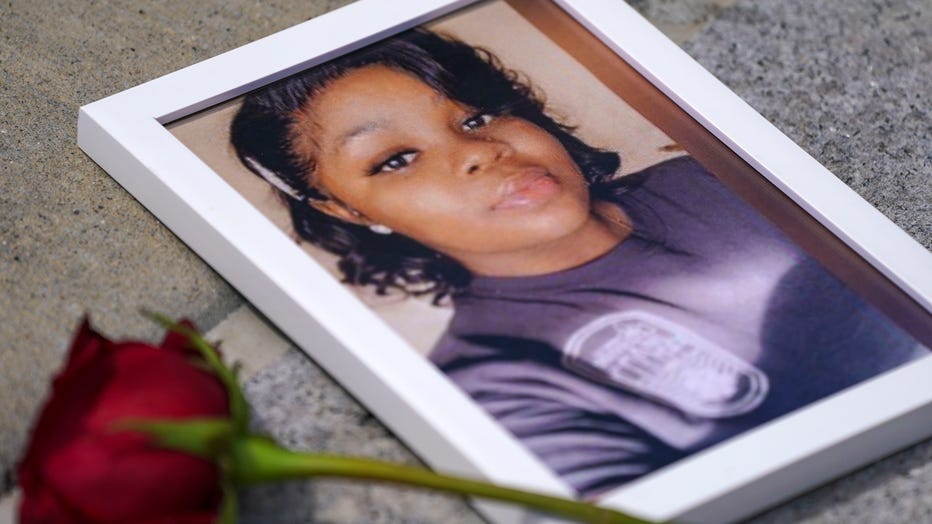 A photo of Breonna Taylor is seen among other photos of women who have lost their lives as a result of violence during the 2nd Annual Defend Black Women March in Black Lives Matter Plaza on July 30, 2022 in Washington, DC. (Photo by Leigh Vogel/Getty

Jaynes and Goodlett allegedly conspired to falsify an investigative document that was written after Taylor’s death, Garland said. Federal investigators also allege Meany, who testified at Hankison’s trial earlier this year, lied to the FBI during its investigation.

Garland alleged that Jaynes and Goodlett met in a garage in May 2020 "where they agreed to tell investigators a false story."

Former Louisville Police Sgt. Johnathan Mattingly, who was shot at Taylor’s door, retired last year. Another officer, Myles Cosgrove, who investigators said fired the shot that killed Taylor, was dismissed from the department in January 2021.