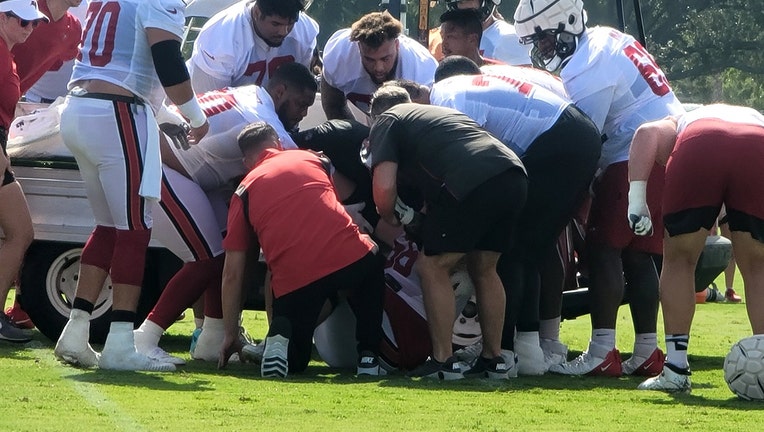 TAMPA, Fla. - Just two days into the Tampa Bay Buccaneers training camp, the team suffered a significant injury. Bucs Center Ryan Jensen had to be carted off the field with a left knee injury.

Initial reports are that it doesn't look good, but the Bucs are awaiting results of an MRI.

Jensen was the first player the Bucs re-signed in free agency when quarterback Tom Brady announced that he was coming out of retirement. Jensen is a key piece to the Bucs offense, and he would be a major loss, if it's a season-ending injury.

James Hill, a Bucs fan attending practice captured the only known video of the injury. From the video he shot it appears that Jensen's knee was hit from the side when Aaron Stinne blocked Logan Hall into him. It didn't appear that Jensen was wearing a knee brace, likely because players were not in pad yet.

"All I know right now is he went down with a knee," said Bucs head coach Todd Bowles. "We'll see when we go inside going forward and go from there."

Second-year lineman and Notre Dame product Robert Hainsey replaced Jensen after he was carted off.