COLUMBUS, Ohio (AP) - The Ohio sheriff's deputy who fatally shot Casey Goodson Jr. in the back five times was charged Thursday with murder in an encounter that is still largely unexplained and involved no body camera or dash cam footage.

The fatal shooting of Goodson, who was Black, took place in Columbus on Dec. 4 while Jason Meade, a white 17-year member of the Franklin County Sheriff’s Office, was finishing an unsuccessful search for a fugitive as part of his work for a U.S. Marshals Service fugitive task force.

Goodson was not the subject of the fugitive search. While U.S. Marshal Peter Tobin initially said Meade, who has since retired, confronted Goodson after Goodson drove by and waved a gun at the deputy, he later withdrew those comments, saying they’d been based on "insufficient information."

Tobin also said Meade was "not performing a mission" for the marshals at the time of the shooting. 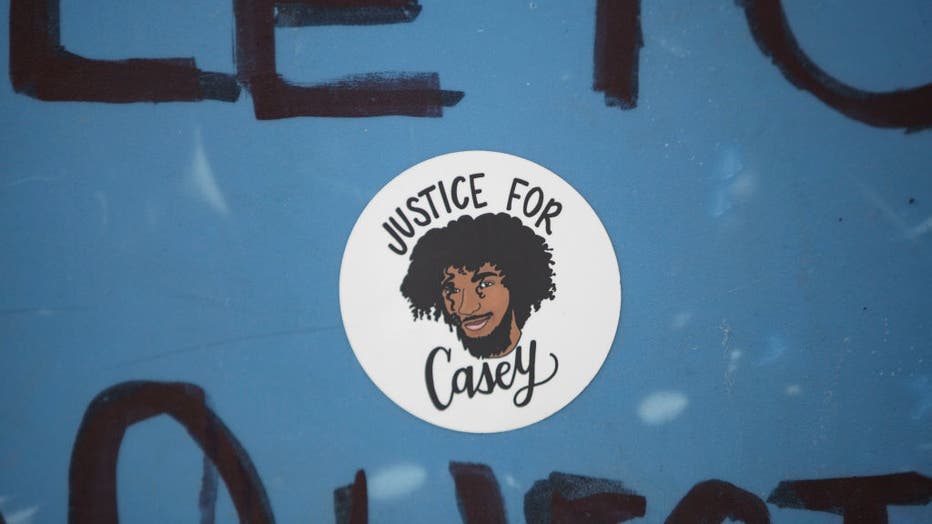 Sticker on the Food Not Bombs cooler reads Justice for Casey during the march and rally. (Photo by Stephen Zenner/SOPA Images/LightRocket via Getty Images)

Relatives say Goodson was opening the door to his grandmother’s house at the time he was shot. Officials said that a gun was recovered from the scene but have not provided further details.

The Franklin County coroner said in March that Goodson had been shot five times in the back.

A judge scheduled an initial hearing for Meade on Friday. A message was left with Meade's attorney, who has previously said that the coroner's report has no bearing on what actually happened that day.

The case remains under criminal investigation by the U.S. attorney’s office with help from the Justice Department’s Civil Rights Division.

Meade retired July 2 on disability. The deputy had been on administrative leave from the sheriff’s office since the shooting.

Sheriff Dallas Baldwin had previously said the autopsy did not "provide all of the facts needed," and that he will wait until the criminal investigation is complete before pursuing any disciplinary action against Meade.

In June, Franklin County Prosecutor Gary Tyack appointed two outside prosecutors to investigate since the county prosecutor’s office serves as legal counsel to the sheriff’s office and anticipates having to defend the county and the law enforcement agency in this case.