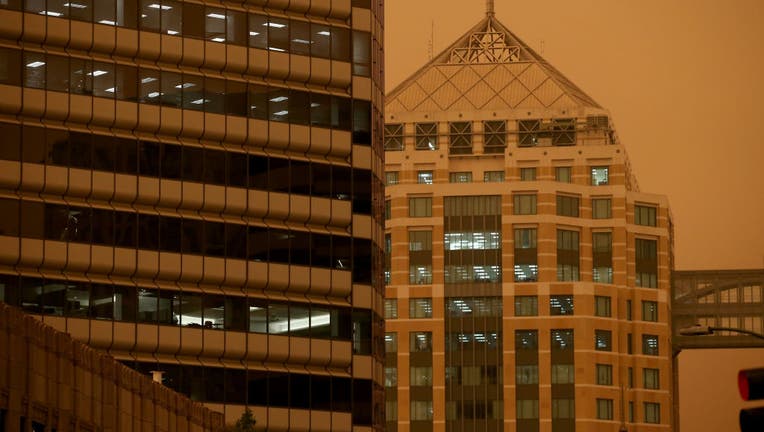 OAKLAND, CA - SEPTEMBER 09: Orange skies are seen in this view of the Ronald V. Dellums Federal Building and U.S. Courthouse in downtown Oakland, Calif., on Wednesday, Sept. 9, 2020. The unusual orange and red-hued skies were a result of smoke from t

SAN FRANCISCO - A man who destroyed evidence during the investigation of the deadly shooting of a federal officer in California by an extremist militia member was sentenced Monday to 10 1/2 years in federal prison, authorities said.

Robert Blancas, 35, was sentenced in San Francisco federal court for obstructing justice and also for enticement of a minor to engage in sexual activity, the U.S. Department of Justice said in a statement.

In a plea agreement, the Castro Valley man acknowledged that he was a member of the "Grizzly Scouts" militia group connected to the "boogaloo" movement, prosecutors said.

The movement is embraced by a loose network of gun enthusiasts and extremists. Experts say the group started in alt-right culture on the internet with the belief that there is an impending U.S. civil war.

Blancas and three other people acknowledged destroying evidence after a federal security officer was killed and another wounded while guarding the Oakland federal building during a racial justice protest in May 2020.

A former Air Force sergeant, Steven Carrillo, 33, is serving 41 years in prison for the attack. He also pleaded guilty last month to killing a Santa Cruz County sheriff’s sergeant a week after the attack on the federal building.

In their plea agreements, Blancas and the others said that after they learned Carrillo was involved in the killing of the federal officer, they destroyed communications between Grizzly Scouts members "and admitted that they intended to impair the integrity and availability of the records for use in official proceedings," the Department of Justice statement said.

Carrillo had written in a group chat: "Dudes I offed a fed." Blancas acknowledged destroying online group communications, wiping records from his cellphone and deleting records in a Dropbox account about the Grizzly Scouts organization.

Last year, Blancas pleaded guilty to conspiracy to obstruct justice by destroying records in an official proceeding and to destroying such records.

The other three men pleaded guilty to conspiracy to destroy evidence and were sentenced to six-month federal prison terms in May.

On Monday, a different judge Monday sentenced Blancas to a six-month term for conspiracy but added an additional 10 years in a sex case that was filed before the conspiracy indictment.

In that case, Blancas pleaded guilty to enticing a minor to engage in sexual activity. In his plea agreement, Blancas said that from about April through September 2020 he got a 15-year-old girl he met via social media to repeatedly send him pornographic photos and videos of herself.

"Blancas also admitted that he knew she was a minor when he did so," the Department of Justice statement said.