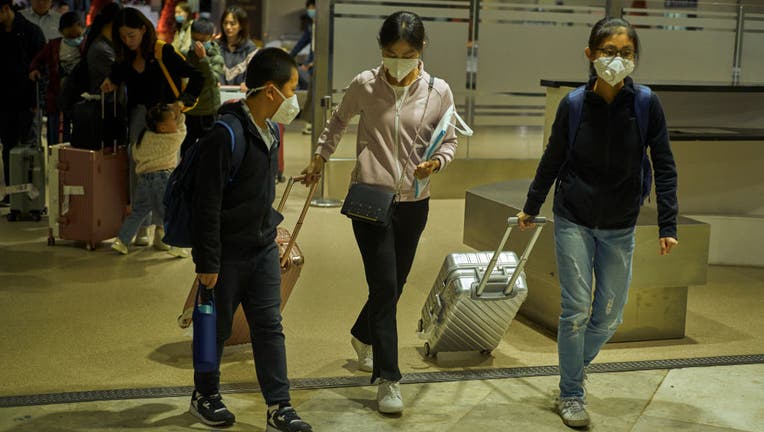 MANILA, PHILIPPINES - JANUARY 23: Passengers from China arrive at the Ninoy Aquino International Airport on January 23, 2020 in Manila, Philippines. The Philippines and other Asian countries have been on high alert following the outbreak of a new str

BEIJING - China's National Health Commission says the number of cases of a new respiratory virus has risen to 830 with 25 deaths.

The update Friday morning also confirmed the first death outside the central province of Hubei.

The health commission in Hebei, a northern province bordering Beijing, said an 80-year-old man died after showing symptoms upon his return from a two-month stay in Wuhan to see relatives.

Wuhan is the capital of Hubei and has been the epicenter of the outbreak of the coronavirus first detected last month.

THIS IS A BREAKING NEWS UPDATE. AP's earlier story is below:

Chinese authorities Thursday moved to lock down at least three cities with a combined population of more than 18 million in an unprecedented effort to contain the deadly new virus that has sickened hundreds of people and spread to other parts of the world during the busy Lunar New Year travel period.

The open-ended lockdowns are unmatched in size, embracing more people than New York City, Los Angeles and Chicago put together.

The train station and airport in Wuhan, the epicenter of the outbreak, were shut down, and ferry, subway and bus service was halted. Normally bustling streets, shopping malls, restaurants and other public spaces in the city of 11 million were eerily quiet. Police checked all incoming vehicles but did not close off the roads.

Authorities announced similar measures would take effect Friday in the nearby cities of Huanggang and Ezhou. In Huanggang, theaters, internet cafes and other entertainment centers were also ordered closed.

In the capital, Beijing, officials canceled major events indefinitely, including traditional temple fairs that are a staple of holiday celebrations, to help control the spread of the virus. The Forbidden City, the palace complex in Beijing that is now a museum, announced it will close indefinitely on Saturday.

At least 17 people have died in the outbreak, all of them in and around Wuhan. Close to 600 have been infected, the vast majority of them in Wuhan, and many countries have begun screening travelers from China for symptoms of the virus, which can cause fever, coughing, trouble breathing and pneumonia.

Meanwhile, the World Health Organization decided against declaring the outbreak a global emergency for now. Such a declaration can bring more money and other resources to fight a threat but can also trigger economically damaging restrictions on trade and travel in the affected countries, making the decision a politically fraught one.

The decision "should not be taken as a sign that WHO does not think the situation is serious or that we're not taking it seriously. Nothing could be further from the truth," WHO Director General Tedros Adhanom Ghebreyesus said. "WHO is following this outbreak every minute of every day."

Chinese officials have not said how long the shutdowns will last. While sweeping measures are typical of China's communist government, large-scale quarantines are rare around the world, even in deadly epidemics, because of concerns about infringing on people's liberties. And the effectiveness of such measures is unclear.

"To my knowledge, trying to contain a city of 11 million people is new to science," said Gauden Galea, the WHO"s representative in China. "It has not been tried before as a public health measure. We cannot at this stage say it will or it will not work."

Jonathan Ball, a professor of virology at molecular virology at the University of Nottingham in Britain, said the lockdowns appear to be justified scientifically.

"Until there's a better understanding of what the situation is, I think it's not an unreasonable thing to do," he said. "Anything that limits people's travels during an outbreak would obviously work."

But Ball cautioned that any such quarantine should be strictly time-limited. He added: "You have to make sure you communicate effectively about why this is being done. Otherwise you will lose the goodwill of the people."

During the devastating West Africa Ebola outbreak in 2014, Sierra Leone imposed a national three-day quarantine as health workers went door to door, searching for hidden cases. Burial teams collecting corpses and people taking the sick to Ebola centers were the only ones allowed to move freely. Frustrated residents complained of food shortages.

In China, the illnesses from the newly identified coronavirus first appeared last month in Wuhan, an industrial and transportation hub in central China's Hubei province. Other cases have been turned up in the United States, Japan, South Korea and Thailand. Singapore, Vietnam and Hong Kong reported their first cases Thursday.

Most of the illnesses outside China involve people who were from Wuhan or had recently traveled there.

Images from Wuhan showed long lines and empty shelves at supermarkets, as people stocked up for what could be weeks of isolation. That appeared to be an over-reaction, since no restrictions were placed on trucks carrying supplies into the city, although many Chinese have strong memories of shortages in the years before the country's recent economic boom.

Liu Haihan left Wuhan last Friday after visiting her boyfriend there. She said everything was normal then, before person-to-person transmission of the virus was confirmed. But things had changed rapidly.

Her boyfriend "didn't sleep much yesterday. He disinfected his house and stocked up on instant noodles," Liu said. "He's not really going out. If he does, he wears a mask."

The sharp rise in illnesses comes as millions of Chinese travel for the Lunar New Year, one of the world's largest annual migrations of people. Chinese are expected to take an estimated 3 billion trips during the 40-day spike in travel.

Analysts predicted cases will continue to multiply, although the jump in numbers is also attributable in part to increased monitoring.  "Even if (cases) are in the thousands, this would not surprise us," the WHO's Galea said, adding, however, that the number of infected is not an indicator of the outbreak's severity so long as the death rate remains low.

The coronavirus family includes the common cold as well as viruses that cause more serious illnesses, such as the SARS outbreak that spread from China to more than a dozen countries in 2002-03 and killed about 800 people, and Middle Eastern respiratory syndrome, or MERS, which is thought to have originated from camels.

China is keen to avoid repeating mistakes with its handling of SARS. For months, even after the illness had spread around the world, China parked patients in hotels and drove them around in ambulances to conceal the true number of cases and avoid WHO experts. This time, China has been credited with sharing information rapidly, and President Xi Jinping has emphasized that as a priority.

Health authorities are taking extraordinary measures to prevent the spread of the virus, placing those believed infected in plastic tubes and wheeled boxes, with air passed through filters.

The first cases in the Wuhan outbreak were connected to people who worked at or visited a seafood market, now closed for an investigation. Experts suspect that the virus was first transmitted from wild animals but that it may also be mutating. Mutations can make it deadlier or more contagious.

WHO defines a global emergency as an "extraordinary event" that constitutes a risk to other countries and requires a coordinated international response. Global emergencies were declared over the Zika virus in the Americas, the swine flu pandemic and polio.

Countries typically resist the notion that they have a crisis within their borders and may argue strenuously for other control measures.

Associated Press journalists Shanshan Wang in Shanghai, Maria Cheng in London and Krista Larson in Dakar contributed to this report.