Officer Christopher Farrar, 50, was killed while on duty. Earlier on May 7, a procession took Officer Farrar's casket to a church in Chandler.

CHANDLER, Ariz. - Family, friends, and members of the community gathered on May 7 to honor a fallen Chandler Police officer.

Christopher Farrar was killed while on duty by a suspect driving a stolen car during a pursuit that involved multiple law enforcement agencies. Gilbert Police officials say the suspect, identified as 25-year-old Jonathan Altland, is being accused of murder, aggravated assault, and auto theft.

Officer Farrar, 50, earned several awards and accolades during his 18-year-career with Chandler Police, including the Medal of Honor. He was part of the K-9 unit, and was a four-time recipient of the Lifesaving Award. He is survived by his mother, father, brother, sister, two sons and daughter, as well as a grandchild. 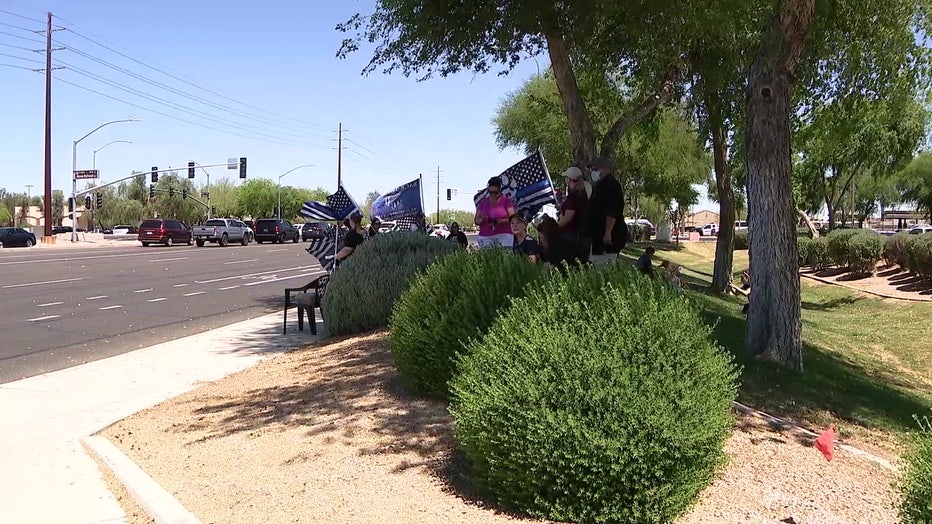 Multiple law enforcement agencies joined in on a motorcade to escort the procession. The procession began at Chandler Fashion Square, and ended at Compass Christian Church in Chandler.

Along the procession route, some decided to stand in the heat in order to show their support for the police department.

"Law enforcement, in general, is a big part of my family growing up, and so I just wanted to be here to pay respects, and I can't really do it in any other way," said Cindy Reed.

Throughout the procession, supporters of law enforcement waved the Thin Blue Line flag and held signs showing love to the Farrar family.

"I support law enforcement 100%, officers 100%, and they need our support right now," said Kailey Crandell. "The morale isn’t as high as it should be, and they need to feel the community they are protecting supports them just as much."

Sgt. Jason McClimans with Chandler Police says the outpouring of love and support has been overwhelming.

"We have had people from all over the country saying that Officer Farrar has touched me and helped me live a better life, and I think that’s why Officer Farrar became a police officer in the first place, to make people’s lives better," said Sgt. McClimans.

A memorial service is scheduled for at 9:00 a.m. on May 8. Members of the Honor Watch will remain with Officer Farrar's casket throughout the night.