Japan's largest scientific institute, RIKEN, used a supercomputer to predict how an airborne illness like the coronavirus can spread in environments that have begun reopening as pandemic restrictions loosen.

The video features a simulation of two scenarios, including one involving four people sitting at a desk facing each other, and another depicting a crowded train.

Both simulations are aimed at depicting the rapid spread of particles from a cough or a sneeze in environments that have begun to reopen as coronavirus restrictions around the world have loosened. 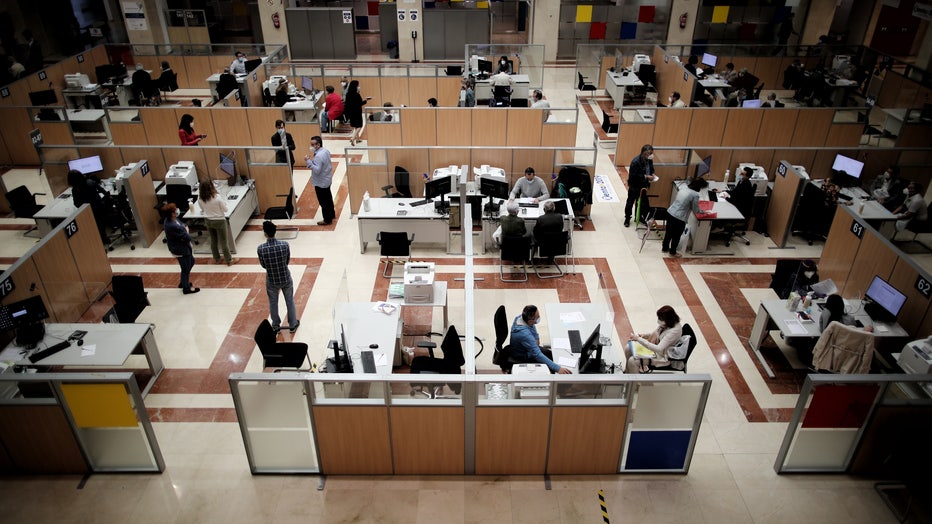 FILE - General view of workers in an office space.

RELATED: Study finds that flushing could release virus-laden ‘toilet plumes’ into the air

In one of the video simulations, an individual coughs inside a typical office environment, triggering virus particles to spread around them. Despite a partition creating a physical barrier between each person and their desk, the computer simulation appears to show air droplet particles spreading and covering all four individuals who are seated in the desk cluster.

In a separate simulation, a packed train traveling at 49 MPH with windows open attempted to show that when the train was filled during rush hour, passengers could not expect proper ventilation in the event that one person coughed or sneezed, according to NHK.

According to the U.S. Centers for Disease Control and Prevention, one of the primary ways COVID-19 spreads is through respiratory droplets produced when an infected person coughs, sneezes or talks. These droplets can be inhaled into the lungs and infect others when landing in the mouths or noses of someone nearby.

RIKEN announced in April that its supercomputer “Fugaku” would be used to combat the COVID-19 pandemic. The institute said installation began on the supercomputer in 2019 and it will be in full-fledged use by 2021. But the process has been streamlined in order to research coronavirus countermeasures.

“One of the most important missions of Fugaku as Japan’s flagship supercomputer is to protect the well-being of citizens using its massive computing power,” said Satoshi Matsuoka, Director of the RIKEN Center for Computing Sciences (R-CCS).

“To combat the global pandemic of the COVID-19 virus, we will rapidly provide access to the capabilities of Fugaku, leapfrogging its preparation, to accelerate the scientific process of diagnosis, treatment, as well as general prevention of infection spread, to contribute to the early termination of the pandemic.”

In May, NHK released a similar video showing how easy it is for the novel coronavirus to spread on a cruise ship or in a buffet-style restaurant.

NHK said it collaborated with infectious disease experts in order to conduct an experiment which recreated a buffet common on cruise ships, since cruise ships helped the virus travel and spread exponentially in the early days of the pandemic.

The experiment involved 10 participants. One person was designated as “patient 0." Assuming that the infected person suppressed their cough with their hand, a fluorescent paint only visible under ultraviolet light was applied to that person’s palm to illustrate the virus.

The rest of the participants, including the “infected“ individual, were then allowed to enjoy the free buffet provided to them for the next 30 minutes.

At the end of the 30 minutes, the room goes dark, and a black light is emitted to expose where the invisible paint has spread, presenting quite a shock to the participants.

In the video, paint can be seen covering the face of the original “infected” individual, as well as on other participants’ clothes and utensils.

While there is currently no treatment or vaccine for COVID-19, medical experts have urged the used of face masks and social distancing as the best weapon against the potentially deadly virus.

The CDC has warned on its website that it may be possible for one to contract the coronavirus by touching a surface or object that has the virus on it and then touching their mouth, nose or eyes.

Health experts fear that silent carriers of the virus could unwittingly infect others at protests where people are packed cheek to jowl, many without masks, many chanting, singing or shouting. The virus is dispersed by microscopic droplets in the air when people cough, sneeze, sing or talk.

One study published on March 12 in “Eurosurveillance,” a peer-reviewed medical journal, found that 17.9 percent of the 3,711 passengers and crew members aboard the Diamond Princess cruise ship, which had an outbreak of the virus, were asymptomatic.

According to the study, 3,063 people on board the ship were administered COVID-19 tests. A total of 634 people tested positive as of Feb. 20.