Dublin prison guard threatened to kill woman if she snitched on him for having sex: suit

The plaintiff, identified as M.R., alleged that she was sexually abused and then threatened by former Correctional Officer Ross Klinger, who has pleaded guilty to sexual abuse of a ward charges filed by the Department of Justice.

OAKLAND, Calif. - A formerly incarcerated woman at the federal prison in Dublin on Thursday sued a correctional officer and the warden in the first civil lawsuit alleging sexual assault and battery in at least a quarter-century.

The plaintiff, identified as M.R. in Northern California U.S. District Court documents, alleged that she was sexually abused and then threatened by former Correctional Officer Ross Klinger, who has pleaded guilty to sexual abuse of a ward charges filed by the Department of Justice.

She claimed that he said he would kill her if she snitched to anyone that they were having sex, her suit states.

"This case is against Officer Klinger, who sexually assaulted and abused my client while she was an inmate at FCI Dublin," M.R.'s attorney, Jessica Pride of San Diego told KTVU. "He subjected her to cruel and unusual punishment. And being sexually abused was not part of her sentence."

Klinger is accused of having illegal sexual relations with at least three women at FCI Dublin in 2020.

KTVU interviewed one of them – Andrea Reyes – extensively earlier in March, who described a similar story to M.R's.: Klinger not only promised to marry both of them, and then said he would harm them if they left him, but he also dug into their personal records to prey on their psychological frailties.

Efforts to reach Klinger or speak with his attorney have been repeatedly unsuccessful. Klinger is out on bail living in Riverside County until he is sentenced.

Klinger is one of five correctional officers – including the former Warden Ray J. Garcia – who have been charged with having sex with incarcerated women.

The suit names Garcia as a defendant in the suit. Garcia's job was upholding, and training others in, the Prison Rape Elimination Act, federal law that prohibits the sexual abuse of prisoners.

Garcia has pleaded not guilty and has a trial schedule for next year.

The suit also identifies a variety of other officers and guards at the prison for their alleged roles in the abuse. Pride said she added those names to show "other examples of sexual abuse" at FCI Dublin, and the "magnitude of the sexual violence that is happening."

M.R.'s allegations are more detailed, but very similar, to the June 2021 criminal charges filed against Klinger by the federal government.

M.R., who was released from FCI Dublin and now lives in Thermal, Calif., laid out in her civil documents that she worked on the recycling crew, which Klinger headed.

MORE: Dublin prison guard says she was forced out for reporting abuse

He would come to work drunk and "regularly reeked of alcohol." He yelled at the women and cussed at them, telling them they were felons who needed to be "treated like s---."

A month into her shift, Klinger started being nice to M.R. He brought her and her friends Starbucks and fast food. He told her he cared for her and wanted to be with her.

In April 2020, the two were walking around the grounds and Klinger performed oral sex on her in a storage warehouse, according to both the civil suit and the criminal charges. They had sex at least five times while another woman served as a lookout.

These sexual encounters continued until October 2020 when Klinger was transferred to a federal prison in San Diego. 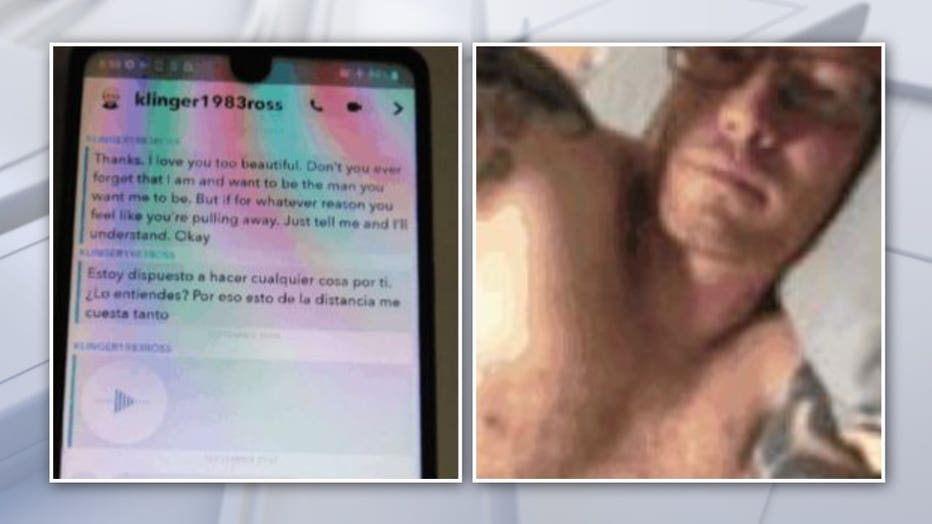 After Klinger was transferred to San Diego, he kept emailing M.R. and talking to her via video, using the alias, Juan Garcia, according to both the civil suit and the criminal charges.

He put money in her commissary account and gave funds to her mother.

When M.R. was released to a halfway house, Klinger called, texted and Snapchatted her. Phone records reveal 427 calls and 497 texts during a one-month period.

Klinger visited her at the halfway house and took her to a nearby Best Western to have sex at least twice, the suit states.

He told M.R. he wanted her to have his baby and he wanted to be a dad. He said his wife left him because he is an alcoholic. He proposed to her and gave her a diamond ring.

The director of the halfway house got wind of what was going on and confiscated M.R.'s phone. The director saw a picture of a shirtless Klinger on it.  The director then alerted authorities, who began investigating, the suit states.

But Klinger began threatening M.R., giving her $6,000 and an iPhone 12 to keep her quiet, according to the suit.

M.R. was sent back to FCI Dublinfor violating her parole, and there, she suffered retaliation.

While in quarantine, a correctional officer identified as Officer Sergio Saucedo "bullied" her for talking to law enforcement.

Saucedo allegedly told her that she would never see her kids again and she would die in prison. One of Klinger's colleagues, Officer John Russell Bellhouse, a safety administrator, also threatened her. Bellhouse is one of the five officers charged in the sex scandal.

M.R. was placed in solitary confinement for her so-called "protection" from other officers and was forbidden from speaking to her family or reading any letters or emails.

Klinger told her that if she told anyone aobut the sex, he'd use a pitchfork on her or hang her to death. He told her that he'd also kill her family.

He also told her that he looked in the prison computer and knew all about her.

She asked for mental health services and was denied – which is a requirement of federal law.

She started cutting herself and "spiraled into severe depression."

Susan Beaty, an attorney at Centro Legal de la Raza in Oakland and who helps sexual assault survivors at FCI Dublin but is not part of this suit, confirmed the women she helps have not gotten any mental health services.

"The prison response to abuse at Dublin has been pretty horrendous, Beaty said. "I haven't talked to a single survivor who's gotten the counseling services that are required under federal law when someone is sexually abused in prison."

To this day, M.R. lives in fear because Klinger is out on bail.

In addition, the prison has no surveillance cameras to capture what happened, the suit points out.

This issue had risen to the level of Congress.

Despite a formal request five years ago to install 52 additional security cameras at the federal prison in Dublin, an aide from U.S. Rep. Jackie Speier said there were "numerous locations" inside the all-women's facility that still did not appear to have the visual oversight, KTVU reported in March.

Specifically, the Speier aide said it did not appear there were security cameras in the dining and commissary areas, the recreational area and residential or housing areas.

The problems facing FCI Dublin are not new.

In 1995, attorney Michael Bien of San Francisco, sued the prison on behalf of three women who also suffered sexual abuse there.

But the settlement back then was based on "good faith," and one of the women, Valerie Mercadel who has since become a pastor after suffering the abuse, said she's still depressed 30 years later.