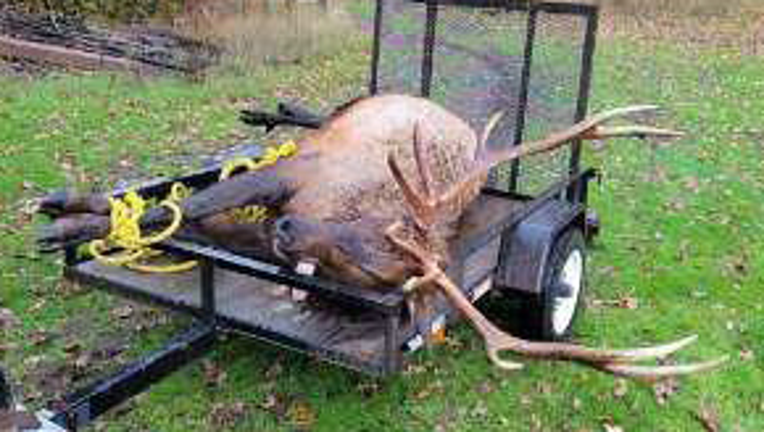 MOSIER, Ore - Three poachers have been fined thousands of dollars for killing a trophy elk and at least one buck deer in 2021, according to the Oregon Department of Fish and Wildlife.

Wildlife officials said they were alerted of the illegal activity after a member of the public reported a suspicious photo circulating on social media last year.

Wildlife authorities said the incident began in November 2021, when a hunter texted the suspicious photo of a 6X6 bull elk on a trailer to the department, prompting many questions.

Senior Trooper Brent Ocheskey received the text and after becoming suspicious himself, and he called the hunter to ask more questions.

"It was a big elk on that trailer," Ocheskey said in a news release. "An elk is a big animal, not easy to pack out without gutting and quartering it. That in itself was suspicious, especially in our patrol area."

RELATED: Elephant kills woman and returns to her funeral to attack her corpse

Authorities said Ocheskey was able to track down Lionardo Munoz, the suspected hunter who harvested the elk.

Troopers said they went to Munoz’s home, but no one answered the door. However, as troops drove away they spotted Munoz in a truck with a 6X6 bull elk head along with the hide in the back. Munoz told authorities the elk belonged to his friend Matt Wilkinson, who was also a passenger in the truck. Wilkinson told authorities his wife, Rachel Hallett, had shot it earlier.

A deer that made its way into a Walmart in Baraboo, Wisconsin, was tackled and pinned to the floor of the store by an intrepid employee, footage shows.

Upon further investigation, troopers said they found and seized three additional deadheads from buck deer near the couple's residence. They issued warnings for unlawful possession of wildlife parts and cited Hallett for illegal take of a buck deer and Wilkinson for aiding in a wildlife offense.

According to the news release, Munoz pleaded guilty to unlawful take of a six-point bull elk. He was sentenced to 18 months probation and a three-year hunting license suspension. He was fined more than $15,000.

RELATED: A 326-pound Asian elephant calf was born at the Houston Zoo

Wilkinson pleaded guilty to the unlawful take of a six-point bull elk and unlawful take of a buck deer. He was sentenced to 12 months probation, 40 hours of community service and a five-year hunting license suspension. He was fined $1,000.

Hallett pleaded guilty to unlawful take of a buck deer. She was sentenced to 12 months probation, 40 hours of community service and a three-year hunting license suspension.

"Oregon hunters, legislators and other conservationists worked hard to pass strict sentencing guidelines to address poaching cases like this one," Bernadette Graham-Hudson, ODFW Wildlife Administrator, said, "Not only did the subjects steal a wildlife resource that belongs to all Oregonians, but they broke hunting safety laws while doing so.

"Hopefully fines like this will serve as a warning to others who would behave so irresponsibly," she continued.

"It is great that hunters and members of the public are willing to call in what they see so we can protect the wildlife and make cases that would otherwise be undetected," Ocheskey added.