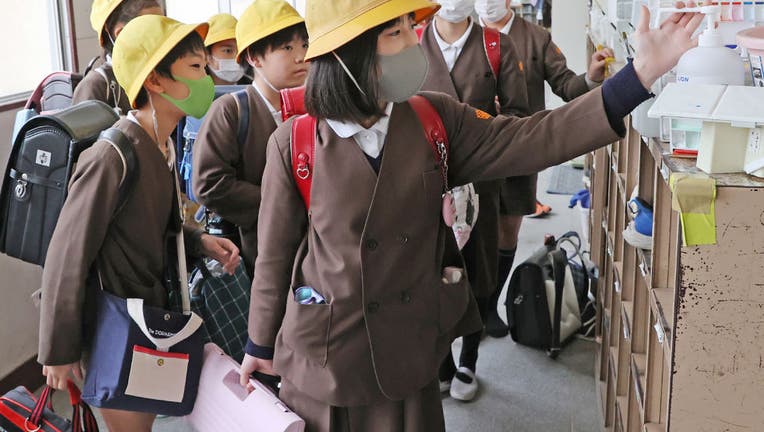 Elementary school children disinfect their hands before leaving schoolin Osaka on Feb. 28, 2020. Japan's prime minister defended his call for schools across the country to close over the new coronavirus, as the country confirmed a fifth death linked (Photo by STR/JIJI PRESS/AFP via Getty Images)

TOKYO (AP) - The coronavirus claimed its first victim in the U.S. Saturday as the number of cases shot up in Iran, Italy and South Korea and the spreading outbreak continued to shake the global economy.

The virus altered daily life around the world as governments moved to combat the contagion. Islam's holiest sites were closed to foreign pilgrims, while professional baseball teams played in deserted stadiums in Japan and officials in France advised residents to forgo customary greeting kisses.

The list of countries touched by the virus climbed to nearly 60, with new cases reported Saturday in Lebanon, Mexico, France and Ecuador. More than 85,000 people worldwide have contracted the virus, with deaths topping 2,900.

A man in his 50s with underlying health conditions became the first coronavirus death on U.S. soil. President Donald Trump initially said the victim was a woman, but the person's gender was later confirmed by state and federal health officials. Officials say they aren't sure how the man acquired the virus, as he had not traveled to any effected areas.

MAP: This is where there are confirmed coronavirus cases in the US and around the world

"Additional cases in the United States are likely, but healthy individuals should be able to fully recover," Trump said Saturday at a briefing, where officials announced heightened warnings about travel to certain regions of Italy and South Korea as well as a ban on travel to Iran.

Many cases of the virus have been relatively mild, and some of those infected are believed to show no symptoms at all. But that can allow for easier spread, and concern is mounting that prolonged quarantines, supply chain disruptions and a sharp reduction in tourism and business travel could weaken the global economy or even cause a recession.

South Korea, the second hardest hit country after China, reported 813 new cases Saturday — the highest daily jump since confirming its first patient in late January and raising its total to 3,150.

Italian authorities say the country now has more than 1,100 coronavirus cases, with 29 deaths so far.

Iran is preparing for the possibility of "tens of thousands" of people getting tested for the virus as the number of confirmed cases spiked again Saturday, an official said. So far, the virus and the COVID-19 illness it causes have killed 43 people out of 593 confirmed cases in Iran.

As governments scrambled to control the spread and businesses wrestled with interruptions, researchers working to better understand the disease reported that the death rate may be lower than initially feared as more mild cases are counted.

A study by Chinese researchers published Friday in the New England Journal of Medicine analyzing 1,099 patients at more than 500 hospitals throughout China calculated a death rate of 1.4%, substantially lower than earlier studies that focused on patients in Wuhan, where it started and has been most severe.

Assuming there are many more cases with no or very mild symptoms, "the case fatality rate may be considerably less than 1%," U.S. health officials wrote in an editorial in the journal.

Evidence of the virus' economic toll continued to mount Saturday, with a new report showing a sharp decline in Chinese manufacturing in February after efforts to contain the virus shut down much of the world’s second-largest economy.

RELATED: COVID-19 more contagious than SARS or MERS, can live on surfaces for up to 9 days, studies say

The survey, coming as global stock markets fall sharply on fears that the virus will spread abroad, adds to mounting evidence of the vast cost of the disease that emerged in central China in December and its economic impact worldwide.

The monthly purchasing managers’ index issued by the Chinese statistics agency and an industry group fell to 35.7 from January’s 50 on a 100-point scale on which numbers below 50 indicate activity contracting.

Japanese Prime Minister Shinzo Abe announced a 270 billion yen ($2.5 billion) emergency economic package to help fight the virus. Abe said at a news conference that Japan is at critical juncture to determine whether the country can keep the outbreak under control ahead of the Tokyo summer Olympics.

Abe, whose announcement this past week of a plan to close all schools for more than a month through the end of the Japanese academic year sparked public criticism, said the emergency package includes financial support for parents and their employers affected by the closures.

"Frankly speaking, this battle cannot be won solely by the efforts of the government," Abe said Saturday. "We cannot do it without understanding and cooperation from every one of you, including medical institutions, families, companies and local governments."

Even in isolated, sanctions-hit North Korea, leader Kim Jong Un called for stronger anti-virus efforts to guard against COVID-19, saying there will be "serious consequences" if the illness spreads to the country.

China has seen a slowdown in new infections and on Saturday morning reported 427 new cases over the past 24 hours along with 47 additional deaths. The city at the epicenter of the outbreak, Wuhan, accounted for the bulk of both. The ruling party is striving to restore public and business confidence and avert a deeper economic downturn and politically risky job losses after weeks of disruptions due to the viral outbreak.

In other areas caught up in the outbreak, eerie scenes met those who ventured outside.

Streets were deserted in the city of Sapporo on Japan’s northernmost main island of Hokkaido, where a state of emergency was issued until mid-March. Tokyo Disneyland and Universal Studios Japan announced they would close, and big events were canceled, including a concert series by the K-pop group BTS.

In France, the archbishop of Paris advised parish priests not to administer communion by placing the sacramental bread in worshippers' mouths. Instead, priests were told to place the bread in their hands. The French government cancelled large indoor events.

Saudi Arabia closed off Islam's holiest sites in Mecca and Medina to foreign pilgrims, disrupting travel for thousands of Muslims already headed to the kingdom and potentially affecting plans later this year for millions more ahead of the fasting month of Ramadan and the annual hajj pilgrimage.

RELATED: As the deadly coronavirus continues to spread, at what point does it become a pandemic?

Tourist arrivals in Thailand are down 50% compared with a year ago, and in Italy — which has the most reported cases of any country outside of Asia — hotel bookings are falling and Premier Giuseppe Conte raised the specter of recession.

The head of the World Health Organization on Friday announced that the risk of the virus spreading worldwide was "very high," while U.N. Secretary-General Antonio Guterres said the "window of opportunity" for containing the virus was narrowing.

Economists have forecast global growth will slip to 2.4% this year, the slowest since the Great Recession in 2009, and down from earlier expectations closer to 3%. For the United States, estimates are falling to as low as 1.7% growth this year, down from 2.3% in 2019.

Despite anxieties about a wider outbreak in the U.S., Trump has defended measures taken and lashed out at Democrats who have questioned his handling of the threat.

At a political rally Friday night in North Charleston, South Carolina, Trump asserted that Democratic complaints about his handling of the virus threat are "their new hoax," echoing similar past complaints by the president about the Russia investigation and his impeachment.

Trump accused Democrats of "politicizing" the coronavirus threat and boasted about preventive steps he's ordered in an attempt to keep the virus from spreading across the United States.