LOS ANGELES - Oscar-nominated actress Felicity Huffman reported to a federal prison in Northern California Tuesday to begin serving her 14-day sentence for paying to have her daughter's answers corrected on a college-admissions test.

Huffman, 56, was sentenced to the prison time in September. She was also ordered to spend a year on supervised release, pay a $30,000 fine and perform 250 hours of community service.

The "Desperate Housewives'' actress pleaded guilty in May to conspiracy to commit mail fraud and honest services mail fraud for paying a $15,000 bribe to have a proctor correct her daughter's answers on a college- entrance exam. She was the first parents to be sentenced in connection with the wide-ranging college-admissions cheating scandal, a probe dubbed "Varsity Blues.''

A spokesman for the actress, who earned an Oscar nod for "Transamerica,'' told ABC News that Huffman reported to the Federal Correctional Institution in Dublin, California, on Tuesday to serve her prison
time.

"I am deeply ashamed of what I have done,'' Huffman told the judge during her sentencing hearing in Boston. "At the end of the day I had a choice to make. I could have said 'no.' I take full responsibility. I will accept whatever punishment you give me.'' 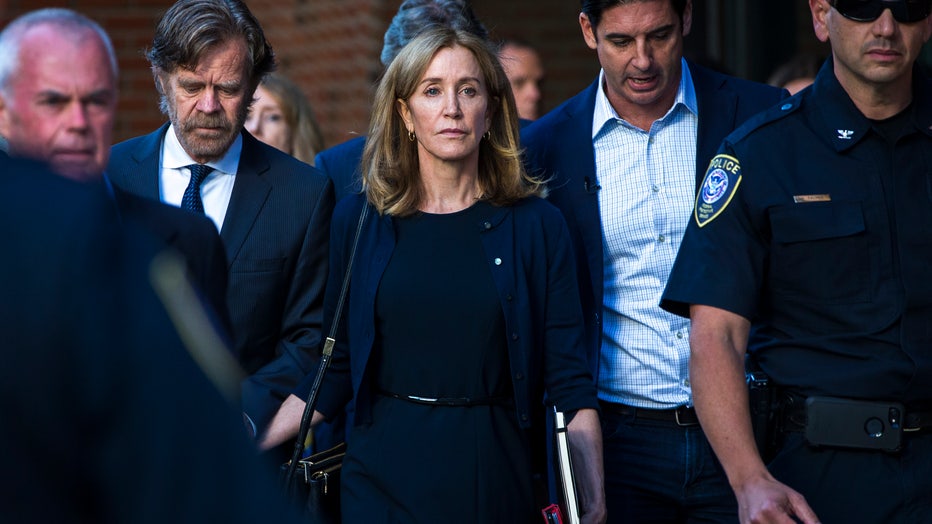 BOSTON, MA - SEPTEMBER 13: Felicity Huffman, right, and her husband, William H. Macy, walk out of John Joseph Moakley United States Courthouse in Boston, MA on Sept. 13, 2019. Huffman was sentenced to 14 days in prison and community service for her r

The U.S. Attorney's Office had recommended that Huffman be sentenced to one month behind bars. Huffman's attorneys argued for a year of probation, 250 hours of community service, and a $20,000 fine. Prosecutors suggested in May they would seek as much as four months in prison for Huffman.

In a letter to the judge, Huffman wrote that she was driven to participate in the college admission fraud out of "desperation to be a good mother. I talked myself into believing that all I was doing was giving my daughter a fair shot.''

"Full House'' actress Lori Loughlin and her husband, fashion designer Mossimo Giannulli, have pleaded not guilty to federal conspiracy and money-laundering charges in the scandal.

Dozens of parents and college athletic coaches were implicated in the nationwide bribery scandal, in which wealthy parents paid Newport Beach businessman William Rick Singer thousands of dollars to have their children's entrance-exam scores doctored. In other cases, students were falsely admitted to elite universities as athletic recruits, even though they never had any experience in the sports for which they were being recruited, prosecutors said.