PHOENIX - Phoenix Fire officials say traffic was disrupted for several hours in parts of West Phoenix as a result of a scrapyard fire.

According to a statement, the fire burned at a large scrapyard business at 27th Avenue and Palm Lane, which is located north of 27th Avenue and McDowell Road. When crews arrived at the scene, they found a well-involved fire that was spreading fast to the rest of the debris in the yard. Crews were able to contain the fire quickly, and prevent it from spreading to nearby businesses.

Video sent in by viewer Carolina Limon from the scene showed a thick black column of smoke rising into the air, as the fire burned.

Monday's hot weather wasn't just tough for Valley residents, but also those out in the heat, such as those who battled the fire.

"It was already hot. The fire, the smoke, it was just terrible man," said Victor Hernandez, who worked next to the scrap metal yard on 27th Avenue and Palm Lane. He thought his boss was welding earlier this afternoon, but that's not what was causing the burning smell.

"We started to smell the smoke, I'm like, what the...? we weld in there, I thought my boss was welding or something and he said no, so something's burning, ya know?" said Hernandez. "So we went out, saw the smoke, and said get out! And we started to move the trucks and cars and everything."

When it gets this hot, firefighters have to look out for flames and the temperatures.

"We had a second alarm, which is upwards of 60-plus firefighters," said Cpt. Danny Gile with Phoenix Fire. "Obviously, this heat doesn't help us. Working in this extreme heat, it shortens are work cycles and our command presence."

The cause was under investigation. 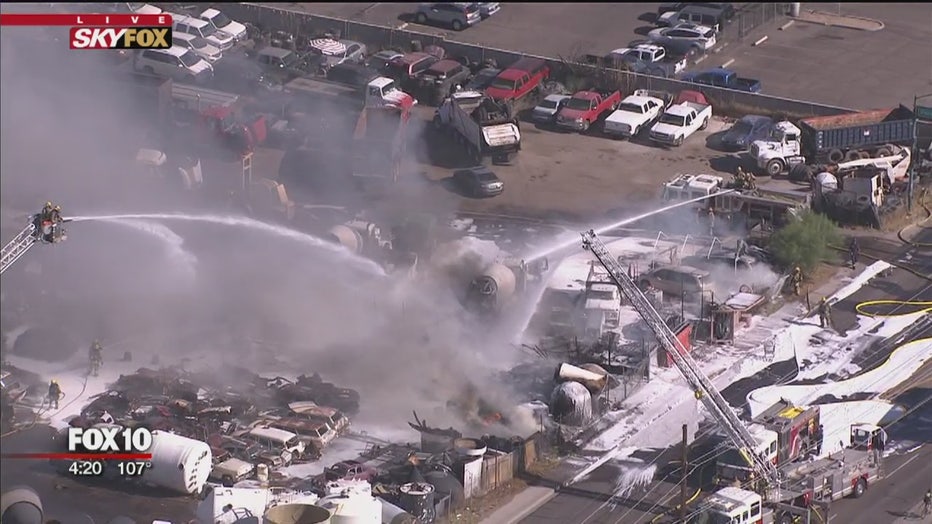