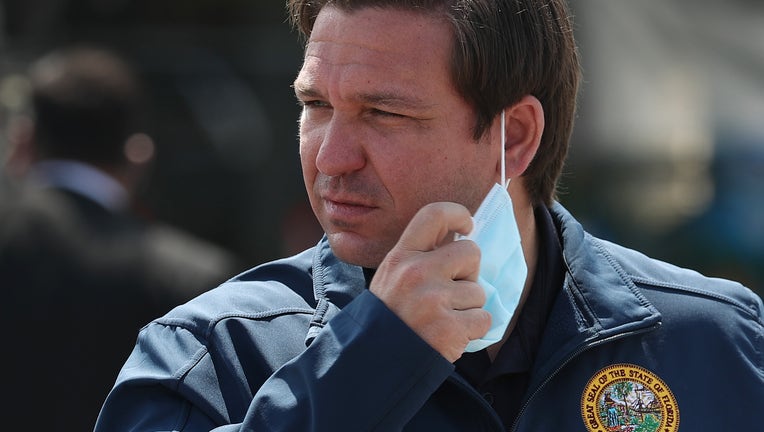 MIAMI GARDENS, FLORIDA - MAY 06: Florida Gov. Ron DeSantis takes his mask off as he prepares to speak during a press conference at the Hard Rock Stadium testing site on May 06, 2020 in Miami Gardens, Florida. Gov. DeSantis announced during the press

“I think it’s something. We provide education, we did an advisory at the beginning of May and we’ve advised that that’s something that could make an impact,” the governor said on Friday during a news conference from Lee Health Fort Myers. “But at the same time, to do police and put criminal penalties on that, is something that would probably backfire.”

He advised residents to continue to be vigilant and avoid crowds if you can.

DeSantis said mandates should be left up to local governments. Several cities and counties in the state, including Orange and Osceola, have issued emergency orders requiring masks to be worn indoors in public. Florida lawmakers and state Agriculture Commissioner Nikki Fried have called for a statewide face mask mandate.

The Centers for Disease Control and Prevention has recommended wearing masks in public settings to slow the spread of the virus.

A coronavirus pandemic model, used widely by the White House, shows that if almost everyone wears a mask in public over the next few months, around 33,000 lives could be saved in the United States.