Officials confirmed 6 people died after a liquid nitrogen line erupted at a chemical plant in Gainesville.

GAINESVILLE, Ga. - At least six people were killed and dozens more were being evaluated following a chemical leak at a Gainesville food processing plant Thursday morning, officials said. Four firefighters were among those taken to the hospital, but thankfully all are expected to be okay. One was being held overnight for observation.

"It will be a lengthy process," Hall County Sheriff Gerald Couch said. "It’s not something that’s quick."

At least six people are dead after a chemical accident at a Gainesville chicken plant.

During a 1 p.m. press conference, officials with Hall County Fire said there was a leak of liquid nitrogen at the facility. Authorities confirmed six people died and 12 others were taken to the hospital, three of which were listed in critical condition.

Beth Downs, a spokesperson for Northeast Georgia Health System, said five people died at the plant and one person died in the emergency room.

Poultry plants rely on refrigeration systems that can include liquid nitrogen. Several federal, state, and local agencies were investigating the incident including the Hall County Sheriff's Office, the U.S. Occupational Safety and Health Administration, the U.S. Chemical Safety and Hazard Investigation Board, and the state fire marshal.

Hall county officials give an update on the chemical spill at a food processing plant in Gainesville, which claimed the lives of at least six people.

Foundation Food Group Vice President for Human Resources Nicholas Ancrum called the leak a tragic accident and said early indications are that a nitrogen line ruptured in the facility.

When leaked into the air, liquid nitrogen vaporizes into an odorless gas that’s capable of displacing oxygen. That means leaks in enclosed spaces can become deadly by pushing away breathable air, according to the U.S. Chemical Safety Board.

Gainesville is the hub of Georgia’s poultry industry, which is the largest in the country. Thousands of employees work across multiple processing plants around the city and much of the workforce, like in many meat processing plants nationwide, is Latino.

Workers who had fled the plant were gathered outside when firefighters responded to the leak Thursday morning, Hall County Fire Department Division Chief Zach Brackett said.

"Once the units arrived, they found a large contingent of employees that had evacuated, along with multiple victims that were in that crowd that were also experiencing medical emergencies around the facility," Brackett said.

The entire roadway of Memorial Park Drive from Browns Bridge Road to Atlanta Highway was shut down. Motorists were being asked to avoid the area and use alternate routes.

Ancrum said maintenance personnel, supervisors and managers were among the victims.

"Every team member is equally important to us, and our hearts go out to their families and communities who have suffered such a devastating loss," Ancrum said.

Gov. Brian Kemp issued a statement regarding the incident, offering condolences and assuring that state agencies were assisting local response and investigations. 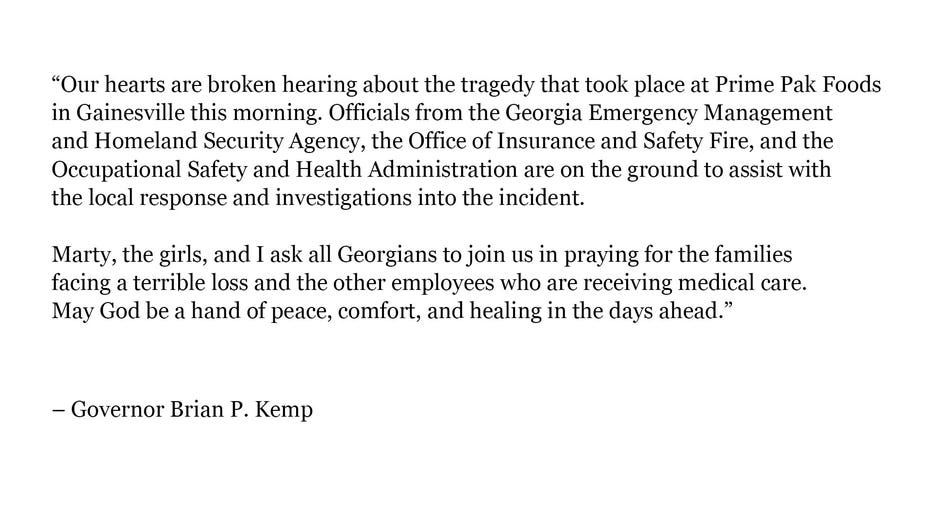 "It came to mind like 9/11 and how chaotic it was," Jackie Reece said.

It’s something those in this community have never seen especially longtime Hall County resident Jackie Reece.

"Everybody just came out screaming and crying and there were two or three that fell out on the ground," Reece said.

Reece described the hectic scene after a chemical leak at the Foundation Food Group Building.

"They just collapsed on the ground," Reece said.

Reeces said he was taken by the emergency officials' bravery during the incident.

"They put their life on the line to save someone’s life and didn’t think about it and here they are fighting for theirs now," Reece said.

6 killed in chemical leak in Gainesville

Dozens of people were also injured due to the chemical leak at the food processing plant Thursday.

"I’m hoping for the best and preparing for the worst," Jose Elias said.

Jose Elias is still on edge as he waits to hear from his uncle, also named Jose Elias, who works in maintenance inside the plant.

"I’ve called him about three or four times," Elias said.

He’s one of the many families who rushed to the plant after learning about the chemical leak.

"It’s more frustrating because I’ve been running around trying to find him for the past 2 hours and I haven’t heard anything. One person tells you one thing and another tells you another," Elias described.

Evacuated employees were taken to a nearby church until it was safe to head back to the plant.

"I’m trying to be optimistic and it’s tearing me apart because he was the nicest person I’ve ever met," Elias said.

"Life can change like the snap of a finger," Reece said. "It’s tragic to see our community go through this."

Three of the firefighters have been released. One firefighter will stay overnight for observation but is expected to be OK.

The plant was known as Prime Pak Foods until January when it became part of Foundation Food Group, a privately held company that Ancrum said has four Gainesville-area locations. The plant takes raw chicken and processes it into products like chicken fingers and individual chicken cuts for restaurants and foodservice operations, partially cooking them and then freezing them for later use.

Previous safety violations at the plant show no problems with the refrigeration system. The plant has been cited by OSHA for violations four times in the past 10 years, online records show. The most serious of those was in September 2015, when 28 violations were initially cited, including citations for failing to make sure machines were properly safeguarded when being maintained to prevent injuries. Two other citations in 2017 involved employees who had fingers amputated by machinery.

Fourteen American workers died from asphyxiation linked to nitrogen in 12 workplace accidents recorded between 2012 and 2020, according to OSHA.

Eleven people injured in the Gainesville leak were treated for respiratory symptoms at the hospital, including three who were in critical condition, health system spokesperson Sean Couch said. He said one was in fair condition and seven were treated and released.

At least four firefighters were injured and taken to the hospital with what Brackett described as respiratory complaints. One firefighter remained hospitalized late Thursday.

"He’s doing well and he should be going home tomorrow," Brackett said.

Brackett said the remainder of the plant’s 130 workers were taken by bus to a nearby church where hospital workers examined them for injuries.

Students were kept safe inside a nearby elementary school during the emergency, though the leak was contained and not airborne, Hall County school officials said. The shelter in place order was lifted Thursday afternoon.