Three police officers have been hailed as heroes after rescuing a man found unconscious in a burning apartment building in Bensalem, Pennsylvania, on August 25, 2021. Credit - Bucks County District Attorney's Office via Storyful

The fire was reported on Aug. 25 at the Bucks Meadows Apartments in Bensalem Township, located just northeast of Philadelphia. Bensalem police officers, identified as Steve Ambs, Kenneth Branford and Samuel Ladd, responded to a fire and immediately jumped into action, according to the Bucks County District Attorney’s Office.

"They arrived and immediately saw smoke coming from Building 5 and began helping to evacuate people from the surrounding buildings," the office said in a statement.

Despite not having any fire protective gear on at the time, the three officers went into building 5, which had become "pitch-black" and filled with smoke, Ambs told District Attorney Matt Weintraub in a Facebook video praising their efforts. Using a flashlight, they spotted the man lying unconscious in the doorway of a second-floor apartment.

Unable to breathe through the thickening smoke, the three officers first had to run out of the building. But they quickly climbed back up the stairs and carried the man to safety.

The bodycam video shows the officers each grabbing one of the unconscious man’s arms and feet. The victim was taken to a local hospital in critical condition but has since improved and remained in stable condition.

"You kind of blackout in the moment, but I remember just pulling him out and getting him out to safety, and then we went to check to make sure no one else was back in there," Ladd said. 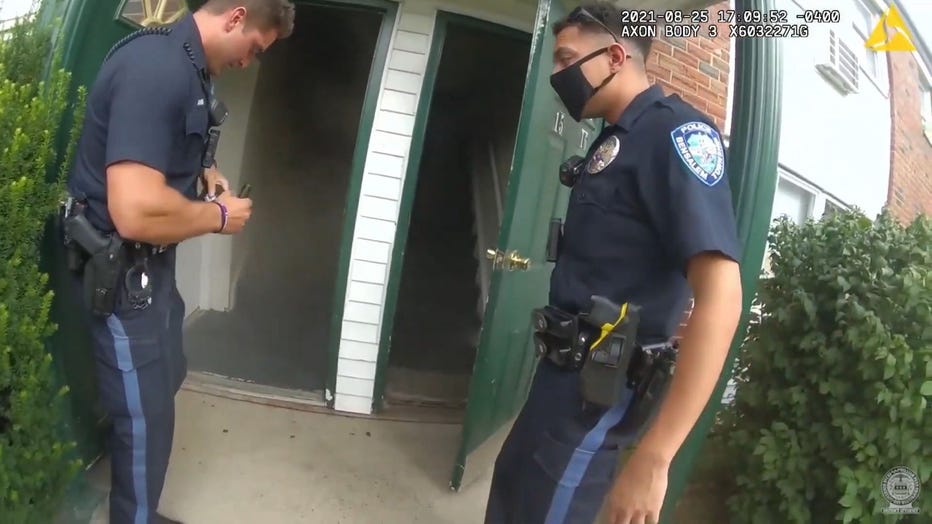 Two of the officers are seen outside of the burning building at Bucks Meadows Apartments on Aug. 25, 2021, in Bensalem Township, Pennsylvania. (Credit: Bucks County District Attorney's Office via Storyful)

Weintraub met with the three officers, calling them "heroes" and thanking each of them for their service to the community.

"Today I have actually the honor and the privilege to be with three of our finest police officers here in Bensalem Township," Weintraub said in the Facebook video. "We are all very blessed to have each of you protecting us as we go about our lives."

Ambs, who has been a police officer with the department for four years, said helping others is the main reason he wears a police badge.

"I think everyone is here for a reason — and that’s my calling to help people," he said.