The House will vote on Nov. 17 on a resolution to censure Republican Rep. Paul Gosar of Arizona and remove him from a congressional committee after a controversial tweet.

WASHINGTON (AP) — The House will vote Wednesday on a resolution to censure Republican Rep. Paul Gosar of Arizona and remove him from a congressional committee for tweeting an animated video that depicted him striking Rep. Alexandria Ocasio-Cortez, D-N.Y., with a sword.

That’s according to a person familiar with the planning who was not authorized to discuss it publicly.

Gosar posted the video over a week ago with a note saying, "Any anime fans out there?" The roughly 90-second video was an altered version of a Japanese anime clip, interspersed with shots of Border Patrol officers and migrants at the southern U.S. border. 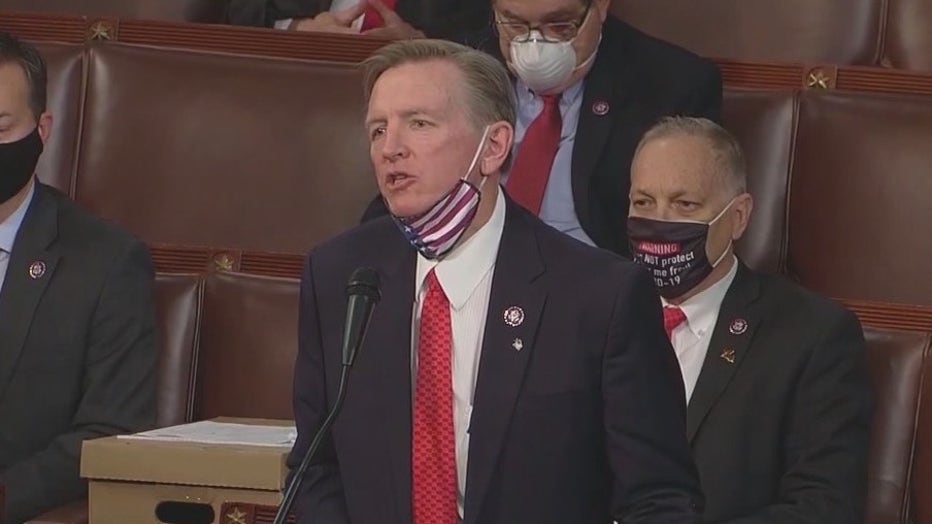 During one roughly 10-second section, animated characters whose faces had been replaced with Gosar and fellow Republican Reps. Marjorie Taylor Greene of Georgia and Lauren Boebert of Colorado were shown fighting other animated characters. In one scene, Gosar’s character is seen striking the one made to look like Ocasio-Cortez in the neck with a sword.

Democratic lawmakers called the video "beyond the pale" and said it was a "clear cut case for censure."

On Tuesday, Gosar issued a statement saying the video wasn’t meant to depict harm or violence, calling it instead "a symbolic portrayal of a fight over immigration policy."

He also told his House Republicans colleagues during a private meeting Tuesday that he would never espouse violence or harm to anyone. Gosar noted that he took the video down from his account, according to a person in the room who spoke on condition of anonymity to discuss the private meeting.

Ocasio-Cortez said Tuesday he has not apologized to her.

"It’s been well over a week. He not only has not apologized," she said. "He not only has not made any sort of contact or outreach, neither he nor the Republican leader (Kevin) McCarthy, but he has also doubled down by saying that I am somehow you know, representative of undocumented people."

The resolution coming up from a vote would remove Gosar from the House Oversight and Reform Committee, where he serves alongside Ocasio-Cortez. Gosar also serves on the House Natural Resources Committee.

A censure resolution, if approved by a majority of the House, requires the censured lawmaker to stand in the well of the House as the resolution of censure is read aloud by the House speaker.

What could a censure mean, exactly?

Gosar could lose two committee assignments if the House votes to censure him.

"It's not funny in this climate," Coughlin said.

The House rules committee advanced the measure on the night of Nov. 16.

Gosar responded to backlash after the video by posting a meme about it being a joke.

Family members who have spoken out against Gosar's character before said he deserves to be held accountable.

"I know he knows better, but at this point, I don't think he cares. Whatever narrative works for Paul is the one he's going to roll with, anything that fuels his hate," says Jennifer Gosar, his sister.

Coughlin went on to say it's likely a censure won't hurt Gosar in his district. His sister said she supports his expulsion from the chamber.