A Nor'easter impacted hundreds of flights at Hartsfield-Jackson Atlanta International Airport on Saturday.

ATLANTA - Weather, including high winds, at Hartsfield-Jackson Atlanta International Airport has caused more than a hundred flights to be diverted on Friday evening.

On Saturday night, flight-tracking site FlightAware reported more than 5,100 flights were canceled or delayed across the U.S. At Hartsfield-Jackson Atlanta, around 400 flights were impacted.

The FAA reported a ground stop due to weather Friday evening shortly after a Wind Advisory had gone into effect around 7 p.m. The FOX 5 Storm Team was also tracking some snow showers moving across north Georgia.

Atlanta-based Delta Air Lines says they are closely monitoring the weather and making adjustments as needed. In a statement, Delta wrote:

"As safety is always Delta’s top priority, our teams in the Operations and Customer Care Center in Atlanta continue to monitor high winds in the area while making tactical adjustments to ensure the safety of our customers and crew members."

GEORGIA BRACES FOR COLDEST TEMPERATURES OF THE SEASON OVERNIGHT

This comes as Delta says it canceled 240 of its 4,500 flights on Friday. It is expected to cancel another 750 on Saturday and 300 on Sunday as a powerful winter storm sweeps across the East Coast.

Delta encourages all customers to check the Fly Delta app or their website for the latest on flights.

According to JetTip.net, a flight-tracking website, more than a hundred flights had been diverted to nearby airports across the Southeast.

According to FlightAware a Delta flight 1802, an international flight from Belize, was forced to divert to Dobbins Air Reserve Base, less than 20 miles north of Atlanta's airport.

A spokesperson for the 94th Airlift Wing stationed there said the plane landed safely around 5:21 p.m. after declaring an inflight emergency. No one was injured.

Hundreds of Atlanta flights diverted, canceled due to weather

The plane refueled and took off again around 10:30 p.m. 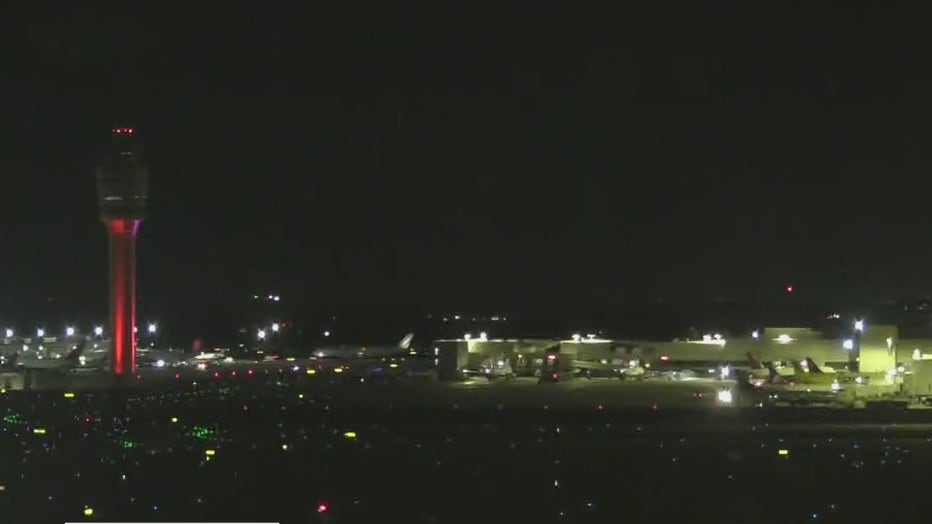 It was not immediately clear if either diversion were directly due to the weather or the ground stop delay.

Many upset passengers took to social media to express their frustration. Some were concerned about missing their connecting flight in Atlanta.