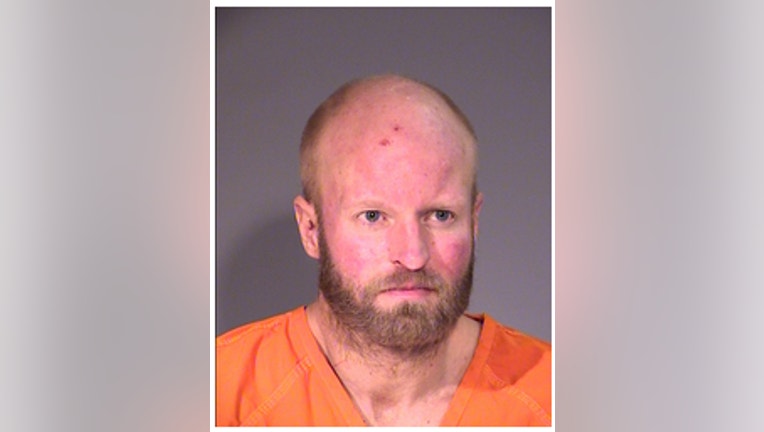 MESA, Ariz. - Court documents obtained by FOX 10 show an Illinois man is being accused of killing his father in Mesa.

According to the documents, 35-year-old Dustin Jeffrey Hegreberg, who lives in Aurora, a city located near Chicago, was arrested on the night of Dec. 20, near the area of McKellips and Recker Roads. The deadly incident, however, happened in a neighborhood near the area of University Drive and Higley Road.

Officers, according to investigators, were called to the scene at around 5:54 p.m. on Dec. 20. A person who called authorities said they had gone to check on their uncle when they noticed the door to their uncle's home was unlocked, and blood was found throughout the home's interior.

When Mesa Police officers arrived, they did a search of the home and found the 57-year-old victim lying face down inside a room, in a pool of blood. By that point, investigators say the victim appears to have been dead for at least several hours.

Investigators say several semi-automatic shell casings were found in the home's master bedroom, where the crime appeared to have taken place. Also, an area of the carpet had been cut out just below the feet of where the victim was found dead.

As for the victim, investigators say the lower portion of his body was wrapped in plastic, and that officers noticed the smell of bleach while they were at the home.

Detectives say they later learned that Hegreberg had been visiting the victim from Illinois, and that members of the victim's family last saw the victim alive on the night of Dec. 19. At that time, family members say the victim appeared to be in good health.

After Hegreberg was arrested, he told police that he and his father had an argument on Dec. 18 over sleeping arrangements. At that point, the victim became nervous and got a gun from a nightstand, and the suspect said he got into a struggle with his father when his father fired three rounds at close range.

Hegreberg, according to investigators, claims one of the shots struck him in the right forearm and the other two grazed him. Hegreberg said he eventually gained control of the firearm, and fired two rounds into the right side of his father's abdomen.

Investigators say during the interview, Hegreberg said he was driving to Illinois following the incident, but changed his mind eventually and drove to the area of his grandmother's home, where he was arrested.

Prior arrest record for Hegreberg

According to court documents, Hegreberg had records of prior arrests.

According to records from officials with the Kendall County Sherif's Office in Illinois, Hegreberg arrested and accused of misdemeanor criminal damage to property and domestic battery on Dec. 15, but later posted bond.

In Arizona, Hegreberg is accused of 2nd degree murder, manslaughter, and tampering with physical evidence. A secured appearance bond in the amount of $1 million was set by a judge on Dec. 21. A preliminary hearing has been scheduled for Dec. 30.