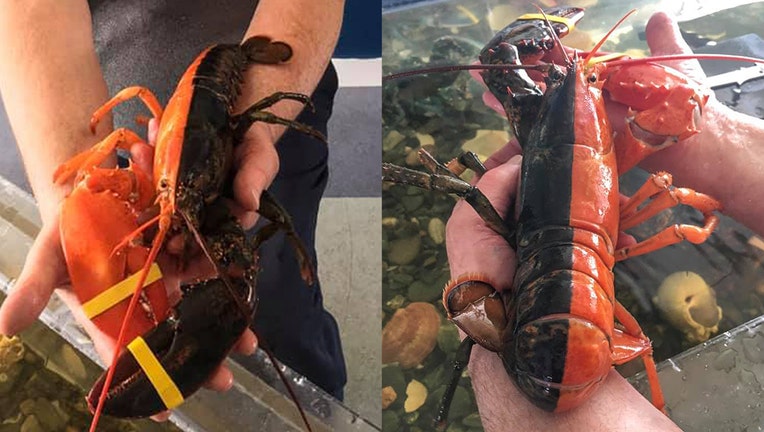 A picture of the extremely rare two-toned lobster that was caught just off the coast of Maine. (Discovery Wharf at theMaine Center for Coastal Fisheries)

STONINGTON, Maine - It was a one in 50 million chance that local fisherman Captain Daryl Dunham might catch an extremely rare two-toned lobster just off the coast of Maine — but he did.

The rare lobster was given to the Discovery Wharf at the Maine Center for Coastal Fisheries where it currently shares a touch tank with three other extremely rare arthropods, including two calico lobsters and a blue lobster.

“I did up the math the other day and four lobsters are eating down at our fish tank, the odds of them sharing a meal is one in 90 octillion,” said Mike Thalhauser, fisheries biologist for the Maine Center for Coastal Fisheries.

The center posted a picture of the lobster on their Facebook page, thanking the local fisherman for sharing the unique find.

Thalhauser said his team was excited for the public to see the rare lobster and educate themselves on the importance of the industry to the community.

Visitors interested in seeing the once-in-a-lifetime group of lobsters can view and even touch them at the center through mid-October, after which they will be released back into the ocean.