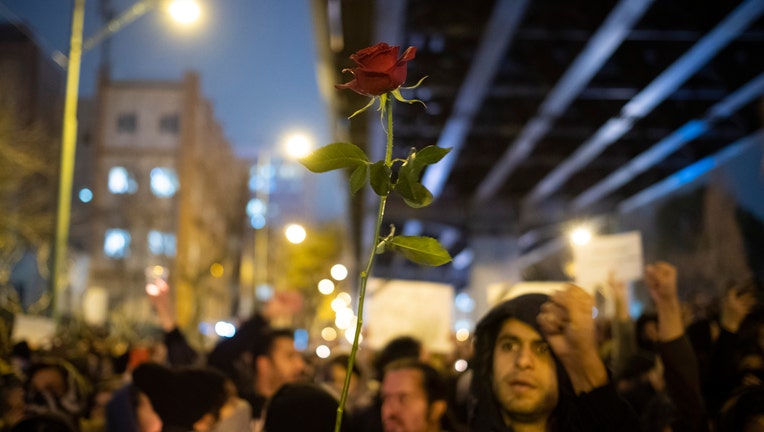 An Iranian protester (Not pictured) holds-up a flower as she attends in front of a University to mark the memory of the victims of the Ukraine Boeing 737 passenger plane in Tehrans business district on January 11, 2020. Irans Revolutionary Guard Corp

Anti-government protests erupted across Iran late Saturday, where thousands of demonstrators called for a regime change with chants of “death to the dictator,” following the state’s reluctant admission that it shot down a Ukrainian passenger plane.

Iranians have expressed anger toward the government since the downing of the plane early Wednesday and the misleading explanations from senior officials that initially denied culpability. Iran finally accepted “full responsibility” for unintentionally shooting down the aircraft on Saturday.

A vigil at Tehran University for 16 Iranian students killed in the crash turned into a massive demonstration with chants of “death to the dictator” and “death to liars.” Demonstrators demanded Ayatollah Ali Khamenei step down and those responsible for the tragedy be fired and put on trial, a criticism that is punishable by two years in prison.

As many as 1,000 protesters tore up pictures of top Iranian Gen. Qassem Soleimani in demonstrations in the streets on Tehran, Iran’s semi-official Fars news agency reported in a rare instance of anti-government coverage, according to Reuters.

“They are lying that our enemy is America, our enemy is right here,” protesters chanted in the street, the outlet reported.

The plane was shot down shortly after takeoff as Iran braced for retaliation after firing ballistic missiles at two bases in Iraq housing U.S. forces. The ballistic missile attack, which caused no casualties, was a response to the killing of Soleimani in a U.S. airstrike in Baghdad.

All 167 passengers and nine crew members aboard were killed. The victims included 82 Iranians, 57 Canadians and 11 Ukrainians, officials said.

"Even talking about it makes my heart beat faster and makes me sad,” Tehran resident Zahra Razeghi told The Associated Press. “I feel ashamed when I think about their families."

"The denial and covering up the truth over the past three days greatly added to the suffering and pain of the families, and me,” she continued.

Security forces riot gear responded to the crowds of demonstrators at the university and Vali-e Asr Square in the capital by shooting tear gas and beating several protesters, injuring at least six.

President Trump called the people of Iran “brave” for taking a stand against the regime, tweeting late Saturday night that America is “inspired by your courage.”

He followed up with another post on Sunday morning, backing up the Iranian demonstrators with a clear message to the leaders of Iran: “Do not kill your protesters.”

“Thousands have already been killed or imprisoned by you, and the World is watching,” Trump wrote. “More importantly, the USA is watching. Turn your internet back on and let reporters roam free! Stop the killing of your great Iranian people!”

Meanwhile, Iranian media has focused on the admission of responsibility for the crash, with several newspapers calling for those responsible to apologize and resign.

Two state TV hosts resigned in protest at the false reporting about the cause of the plane crash.

Bahareh Arvin, a reformist member of Tehran city council, took to social media to say she was resigning in protest at the government's lies and corruption, saying that "with the current mechanism, there is no hope of reform."

As further calls for protests against the Iranian government circulated for later Sunday, Revolutionary Guard members on motorbikes and plainclothes security men patrolled Tehran in force.

Fox News' Rick Leventhal and The Associated Press contributed to this report.