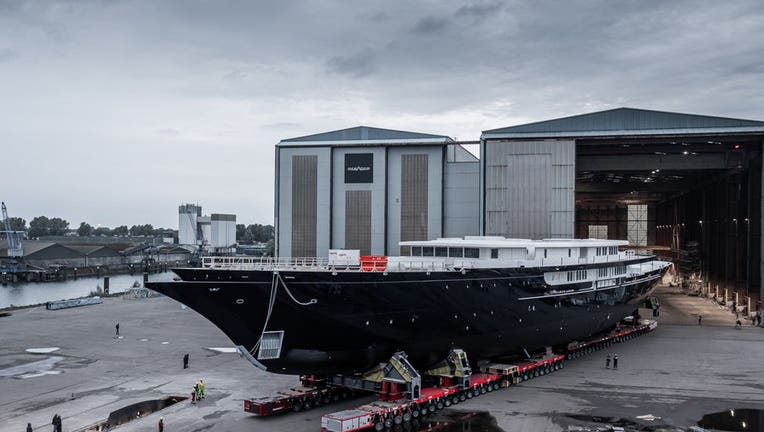 Jeff Bezos' superyacht in the Oceanco shipyard. The $485 million vessel will have a height over 130 feet.

Jeff Bezos will pay for Rotterdam to partially dismantle a nearly 145-year-old bridge so he can sail his $485 million super yacht out after finishing construction on the vessel.

The Oceanco shipyard in Alblasserdam near Rotterdam has nearly completed the construction of Y721, the former Amazon CEO’s yacht, but the vessel is too big to sail out with the bridge as it is. The builders asked the local council to remove the bridge’s central section so the yacht can pass.

"It's the only route to the sea," a spokesman for the mayor of Rotterdam told AFP, adding that billionaire Bezos, 57, would pay for the operation. The super yacht, which will be the largest boat built in Oceanco and one of the largest ever built, requires a 130-foot clearance, at least, to pass through.

The Koningshaven Bridge, known to locals as De Hef, dates from 1878 but was rebuilt after the Nazis bombed it in 1940 during World War II. The local council replaced the original swing bridge design after several traffic jams and collisions, changing it to a lifting bridge.

A look at the career of Jeff Bezos, world's richest man

Jeff Bezos, the founder of Amazon, Blue Origin and owner of the Washington Post, is thought to be the richest person in the world.

The local council completed a major repair on the bridge in 2017 and promised not to dismantle the bridge again.

The shipbuilders dismissed suggestions that they sail a partially-finished vessel down the river and finish it elsewhere. Marcel Walravens, who managed the renovation, said it would prove impractical.

"If you carry out a big job somewhere, you want all your tools in that place," Walravens told Rijnmond. "Otherwise you have to go back and forth constantly."

Walravens noted that the municipality considers the project "very important."

"Rotterdam has also been declared the maritime capital of Europe," he explained. "Shipbuilding and activity within that sector are therefore an important pillar for the municipality."