Los Angeles - Ye, commonly known as Kanye West, is threatening to cancel his performance at Coachella over comments Billie Eilish made about rapper Travis Scott at a recent concert.

The rapper posted a screenshot to his Instagram Thursday regarding Eilish’s reported comments about Scott at a concert in Atlanta.

"Billie Eilish dissed Travis Scott at her concert after she stopped the show to give her fan an inhaler! ‘I wait for the people to be okay before I keep going,’" the post West screenshotted read.

In the comments, West wrote, "COME ON BILLIE WE LOVE YOU PLEASE APOLOGIZE TO TRAV AND TO THE FAMILIES OF THE PEOPLE WHO LOST THEIR LIVES." 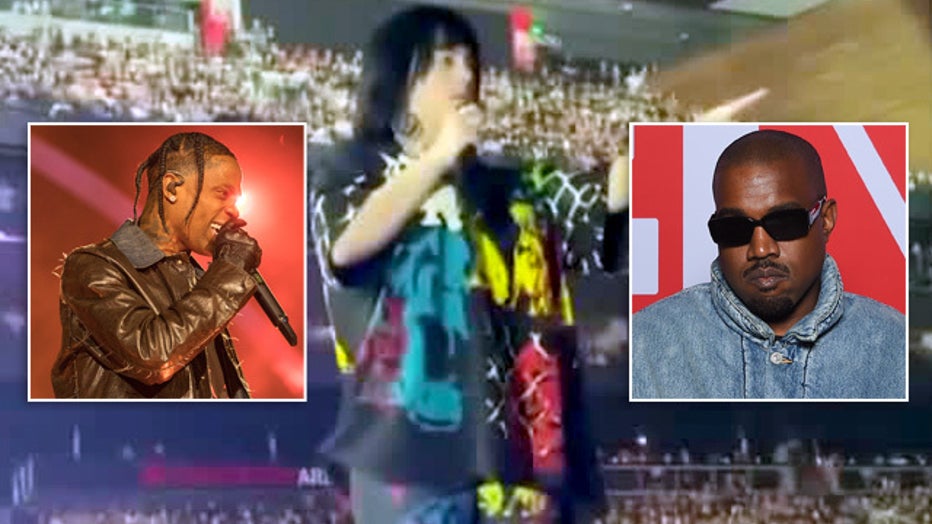 He continued: "NO ONE INTENDED THIS TO HAPPEN TRAV DIDN’T HAVE ANY IDEA OF WHAT WAS HAPPENING WHEN HE WAS ON STAGE AND WAS VERY HURT BY WHAT HAPPENED AND YES TRAV WILL BE WITH ME AT COACHELLA BUT NOW I NEED BILLIE TO APOLOGIZE BEFORE I PERFORM."

At a recent concert, Eilish was seen stopping her show to make sure a fan who could not breathe was given an inhaler and seemingly dissed Travis Scott by saying "I wait for the people to be OK before I keep going." 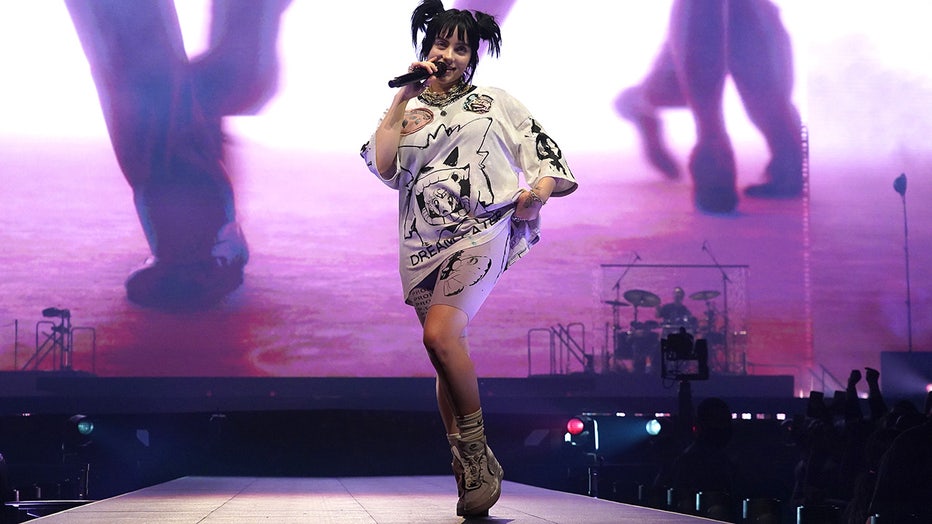 Billie Eilish performs onstage during her "Happier Than Ever" tour opener at Smoothie King Center on February 03, 2022 in New Orleans, Louisiana. (Photo by Kevin Mazur/Getty Images for Live Nation)

Scott was the headliner for the sold-out Astroworld Festival in NRG Park in Houston in November, which was attended by an estimated 50,000 people. The crowd suddenly surged toward the stage during a performance by Scott, squeezing fans so tightly together that they could not breathe or move their arms in the chaos. The incident resulted in 10 deaths and several injuries.

Scott has since faced criticism over the decision to keep the show going while first responders did their best to help the injured audience members. He was named in three separate lawsuits by victims and other Astroworld 2021 attendees.

In a tweet in November, Scott said he was "absolutely devastated by what took place last night." He pledged to work "together with the Houston community to heal and support the families in need." 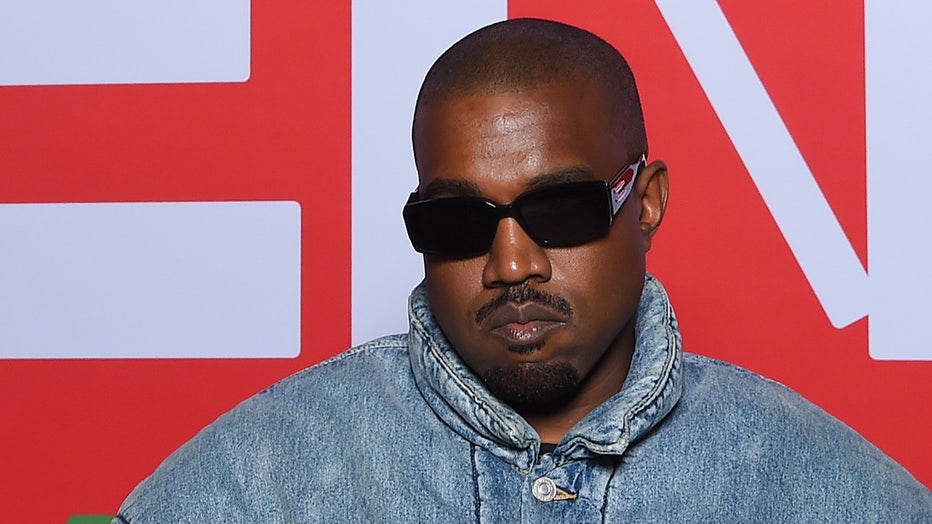 The rapper, whose real name is Jacques Bermon Webster, announced in a press release that he was working with law enforcement and investigators to "respectfully and appropriately" contact the families of the victims so that he could do everything in his power to assist those affected "throughout their grieving and recovery process." 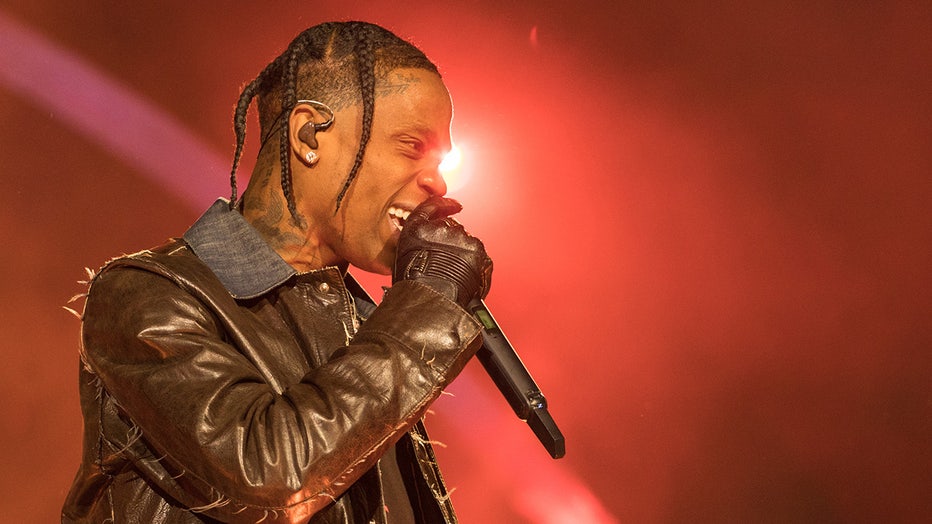 The Coachella Valley Music and Arts Festival has been postponed for the last two years due to the COVID-19 pandemic. Travis Scott was set to headline the show in Riverside County, but was removed following the Astroworld tragedy.

Thursday's comments by West come just months after a Los Angeles judge approved a petition by the rapper to officially change his name to be known simply as "Ye," with no middle or last name. His social media account handles still refer to him as Kanye West.

Los Angeles Superior Court Judge Michelle Williams Court gave her nod to the request by the singer, who filed his petition Aug. 24 and stated he was making the change for personal reasons.

During what Kardashian later implied was an episode brought on by his bipolar disorder, West brought up the possibility of divorcing his wife at a campaign event while claiming they considered aborting their first child.

In a since-deleted tweet, the "Power" rapper also claimed that he’d been "trying" to divorce Kardashian ever since she attended a prison reform event with Meek Mill in 2018.

In the same rant, he also shaded Kardashian’s past Playboy spread and claimed that the reality star’s mother, Kris Jenner, was no longer allowed to see his children.

He later apologized for the Twitter rant but the ordeal reportedly left Kardashian "furious."

In recent months, Eilish has used her platform to be an active voice in politics. Billie Eilish slammed the state of Texas in October over its controversial abortion law while performing at Austin City Limits.

The Grammy-winning artist took the stage at the show to perform some of her hits. However, she stopped at one point to discuss politics, denouncing the abortion law.

The star admitted that she almost didn’t attend the show as an act of protest about the law, which went into effect on Sept. 1 after being upheld in a 5-4 decision by the U.S. Supreme Court. It is the strictest abortion law in the country.

Critics say many women don’t yet know they’re pregnant at six weeks – around the time when a fetal heartbeat can first be detected – and the law makes no exceptions for rape or incest. It also allows citizens to sue providers of anyone helping women get an abortion.