WASHINGTON - Garth Brooks, Dick Van Dyke, Debbie Allen, Joan Baez and violinist Midori were lauded Sunday night during the airing of the 43rd Kennedy Center Honors, a scaled-down event that had been delayed due to the coronavirus pandemic.

Normally the medallion ceremony is held at the State Department, but this year it was moved to the Kennedy Center’s opera house, with about 120 people spread out at tables on the stage and backstage area looking out at the empty rows of seats.

Singer Gloria Estefan hosted the ceremony and cellist Yo Yo Ma performed, who are both previous Kennedy Center Honors recipients. Kelly Clarkson sang a rendition of Brooks’ song "The Dance," as the country music icon became emotional from the audience while sitting next to his wife and fellow country singer Trisha Yearwood.

Instead of the usual several-hour black-tie event, followed by dinner, the festivities were recorded in late May with a limited audience and broadcast Sunday on CBS. The musical performances and tributes — traditionally the centerpiece of the event — were split into two nights and edited down into the television special. 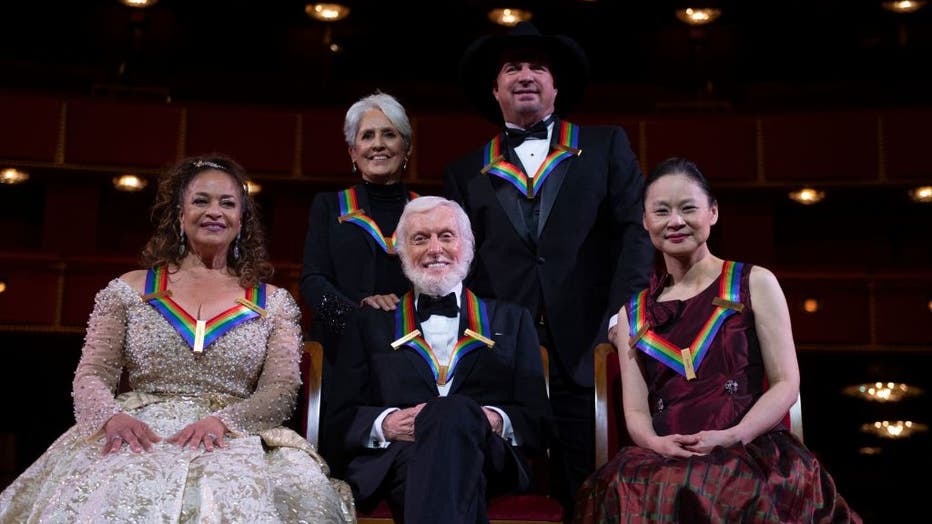 In his introduction of Brooks, actor Bradley Cooper noted that despite all of his success — the country singer has "remained the humblest man you’ll ever meet," according to The Hollywood Reporter.

"There’s country music, rock, gospel, honky-tonk — and then there’s Garth Brooks. Garth is a power hitter, who swung for the fences and shattered the barriers between musical genres forever expanding the vocabulary of country music and changing American culture," Cooper said.

Baez brought an unexpected guest to the events: Dr. Anthony Fauci. The singer-songwriter paints portraits and posts them online, and she painted one of Fauci in 2020. They started talking and "struck up a mutual fan-ship," Baez said.

Shonda Rhimes, a prolific television producer and founder of the TV production company Shondaland, honored Allen for her work as a dancer and choreographer, among other things. She called her "an inspiration and a symbol of power," according to The Hollywood Reporter.

"She was one of those pivotal forces in the world who made me feel like I could be whoever I wanted to be," Rhimes said, who has worked with Allen on shows such as "Grey’s Anatomy" and "Scandal." "Debbie’s vision is to create opportunity for talented people who might otherwise not have been given a chance."

Allen is a veteran of tribute programs for previous Kennedy Center Honors recipients. She said this year’s process was uniquely intimate. "We’re spending a lot more time together than other groups of honorees," she said.

Van Dyke was introduced by his Mary Poppins co-star Julie Andrews. She compared him to his character, Bert who worked as a chimney sweep.

"Like his character Bert in that movie, Dick seems to have found the secret to happiness, and like Bert, Dick is many things: He’s an artist, a one-man band, a profound philosopher, a high-stepping showman and spreader of charm. Good luck does rub off when he shakes hands with you," Andrew said, according to The Hollywood Reporter.

The recipients also spoke after getting the iconic medallion placed around their necks. Several of the artists said they hoped their modified ceremony would be one of a series of benchmarks in the country’s cultural reopening.

Midori said it made her happy, "coming out of these very dark times, to be able to see the arts coming back."

The honorees met with President Joe Biden last month, marking a return to tradition after former President Donald Trump avoided the celebration during his tenure. Biden said he and first lady Jill Biden had met with the group "as ordinary fans of their extraordinary work that touches the soul of our human experience."

"And we did so as your president and first lady recognizing how art touches the soul of America," he continued in a recorded video message. "This year, with profound loss and pain, repair and renewal, the artist’s vision is as important as ever."

The performing arts center is planning a full-scale reopening in September with events slowly ramping up until then. The 44th Kennedy Center Honors program should take place, back on its usual schedule, in December.