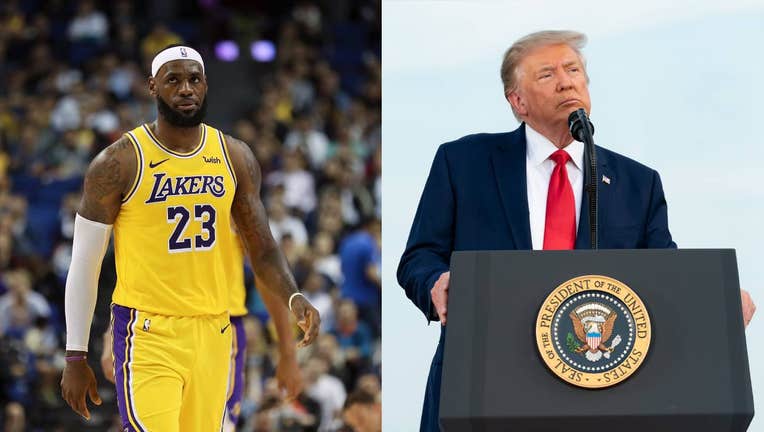 LOS ANGELES - Los Angeles Lakers star LeBron James on Wednesday said he doesn't think the NBA will miss President Trump as a viewer after the president recently declared his lack of interest in the league because of players kneeling for the national anthem.

"I really don't think the basketball community are sad about losing his viewership, him viewing the game," James said following the Lakers' 105-86 loss to the Oklahoma City Thunder on Wednesday night in Orlando, Fla., according to Mark Medina of the USA Today.

During an interview with  "Fox & Friends," earlier Wednesday, President Trump pushed back on professional athletes kneeling for the national anthem, calling it "disgraceful."

"I think it's disgraceful," Trump said. "We work with them (the NBA), we worked with them very hard trying to get open. I was pushing for them to get open. Then I see everybody kneeling during the anthem. It's not acceptable to me. When I see them kneeling I just turn off the game. I have no interest in the game. Let me tell you this, plenty of other people out there, too."

Los Angeles Clippers head coach Doc Rivers also responded to the president's comments during a video conference call with reporters on Wednesday, according to Tania Ganguli of the Los Angeles Times. Rivers was captured on video wearing a hat with the words "VOTE" on it.

“We lost one guy. Like, really, I don’t even care. We know that justice is on our side, right?" Rivers said. “And this hat that I’m wearing is what our president is trying to get us to not do, which I think is just as disgraceful.”

The president took to Twitter last month to express his excitement for the return to live sports following a hiatus during the coronavirus pandemic, but added that anytime he saw a player kneeling, "the game is over for me!"

"Looking forward to live sports, but any time I witness a player kneeling during the National Anthem, a sign of great disrespect for our Country and our Flag, the game is over for me!," Trump wrote on July 21.

Following that tweet, New Orleans Pelicans veteran J.J. Redick said he believed no one in the league cared about whether Trump was watching them play.

The NBA has averaged 1.86 million viewers across ABC, ESPN, and TNT through Monday, up roughly 15 percent from when the league suspended its season in March, according to Sports Media Watch, which cited Nielsen estimates. While those numbers could be seen as normal after such a long hiatus in sports, they also co-existed with local regional sports network coverage.

In June, the NBA and the players union agreed that shedding light on social justice issues would be a shared goal of the 22-team season restart in Orlando. "Black Lives Matter" can be seen printed on the court during games.

“The league and the players are uniquely positioned to have a direct impact on combating systemic racism in our country, and we are committed to collective action to build a more equal and just society,” NBA Commissioner Adam Silver said. “A shared goal of our season restart will be to use our platform in Orlando to bring attention to these important issues of social justice."