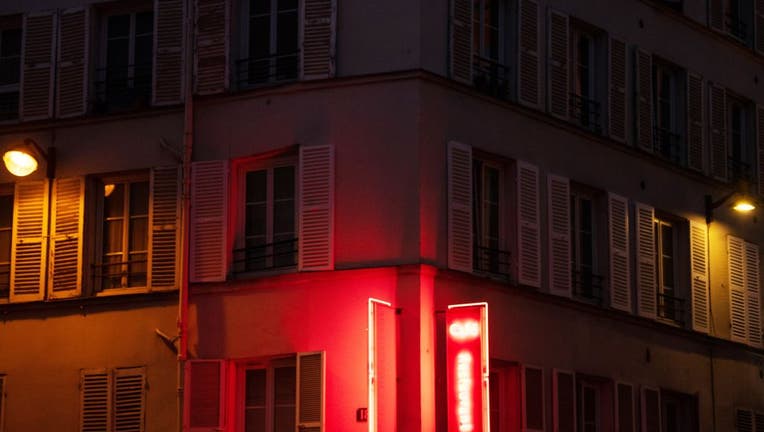 A glowing neon hotel sign as apartment lights remain off in residential buildings at night in Paris, France, on Thursday, July 28, 2022. Although economic expansion in France beat expectations by a distance, the European energy crisis is pushing up t

PARIS (AP) - Fanning out like urban guerrillas through Paris' darkened streets well after midnight, the anti-waste activists shinny up walls and drain pipes, reaching for switches to turn off the lights.

One by one, the outdoor lights that stores had left on are extinguished. It's one small but symbolic step in a giant leap of energy saving that Europe is trying to make as it rushes to wean itself off natural gas and oil from Russia so factories aren't forced to close and homes stay heated and powered.

Engineer Kevin Ha and his equally nimble friends had been acting against wasteful businesses in Paris long before Russia started cutting energy supplies to Europe in a battle of wills over Moscow's invasion of Ukraine. As such, the campaigners were precursors of the energy economy drive becoming all the rage in France, Germany and elsewhere. Their message — that everyone can contribute — is almost word-for-word what public officials from cabinet ministers to mayors are saying now, too.

"Everyone can have a positive impact at their own level, by adopting good practices, by doing the right things to reduce their overall energy footprint," the 30-year-old Ha said on a recent night of light-extinguishing on the Champs-Élysées boulevard.

Sen. Joe Manchin said the new measure "would dedicate hundreds of billions of dollars to deficit reduction by adopting a tax policy that protects small businesses and working-class Americans while ensuring that large corporations and the ultra-wealthy pay their fair share in taxes."

The stakes are high. If Russia severs the supplies of gas it has already drastically reduced, authorities fear Europe risks becoming a colder, darker and less-productive place this winter. It's imperative to economize gas now so it can be squirreled away for burning later in homes, factories and power plants, officials say.

"Europe needs to be ready," said European Commission President Ursula von der Leyen. "To make it through the winter, assuming that there is a full disruption of Russian gas, we need to save gas to fill our gas storages faster. And to do so, we have to reduce our gas consumption. I know that this is a big ask for the whole of the European Union, but it is necessary to protect us."

And although Europe is scrambling to get energy from elsewhere, any difficulties this winter could be a harbinger of worse to come if Russian gas supplies are completely severed and stay off through 2023, said France's minister overseeing energy, Agnès Pannier-Runacher.

"If gas deliveries are cut by the end of the year, that will mean we'll have a full year without Russian gas, so the following winter could be even harder," Pannier-Runacher told French senators.

Hence the mounting appeals — already familiar to exasperated parents of wasteful teenagers everywhere — for Europeans to take shorter showers, switch off power sockets and otherwise do what they can.

Germany had been getting about a third of its gas from Russia, making the EU’s biggest economy and most populous nation conspicuously vulnerable. Energy saving is in full swing, with lights going off, public pools becoming chillier and thermostats being adjusted.

The glass dome of the Reichstag, the parliament building in Berlin, is going dark after it closes to visitors at midnight, and two facades will no longer be lit. Legislators' office temperatures will drop by 2 degrees to 20 Celsius (68 Fahrenheit) this winter. Berlin City Hall, the Jewish Museum, two opera houses and the landmark Victory Column with panoramic views are among about 200 sites in the German capital that will no longer be lit at night.

Saunas are closing in Munich’s municipal swimming pools, which have chillier water now, too. There’ll only be cold showers at public pools in Hannover, part of a plan by the northern city to cut its energy use by 15%.

"The sum of all the contributions will help us get through this winter and be prepared for the next one," said Robert Habeck, Germany's vice chancellor and economy minister. He also told news weekly Der Spiegel he has slashed the time he spends showering.

"It will be a demanding, stony road, but we can manage it," he said.

With a campaign dubbed "Flip the Switch," the Netherlands' government is urging showers of no more than five minutes, using sun shades and fans instead of air conditioning, and air-drying laundry.

RELATED: Shops in Spain must set A/C no lower than 81 degrees to save energy

Under a law passed Monday in often-sweltering Spain, offices, stores and hospitality venues will no longer be allowed to set their thermostats below 27 degrees Celsius (81 degrees Fahrenheit) in summer, nor raise them above 19 degrees Celsius in winter.

Prime Minister Pedro Sánchez asked office workers to ditch neckties, presumably to lessen the temptation to use air conditioning. He led by example, appearing at a news conference in an open-necked shirt.

The Italian government also is recommending limits on heating and cooling in public buildings.

In France, the government is targeting a 10% reduction in energy use by 2024, with an "energy sobriety" drive. Mayors are also waging their own war on waste, with fines introduced for air-conditioned or heated stores that leave front doors open; others are working to limit the pain of soaring energy prices.

The 8,000 residents of Aureilhan, in the foothills of the Pyrenees in southwestern France, have been adjusting to nights without street lights since July 11. Extinguishing all 1,770 of them from 11 p.m. to 6 a.m. will save money that Mayor Yannick Boubée would rather spend on roads and other maintenance. Otherwise, he said, the town's 84,000-euro ($86,000) lighting bill in 2021 was on course to nearly triple next year.

"When it comes down to it, there’s no reason to keep the lights on at night," he said by phone. "It is shaking up our way of thinking."

Next will be convincing townspeople to agree to less-heated classrooms when schools reopen.

"We’re going to ask parents to put a pullover on their children, all measures that don’t cost anything," he said. "We have no choice, unfortunately."