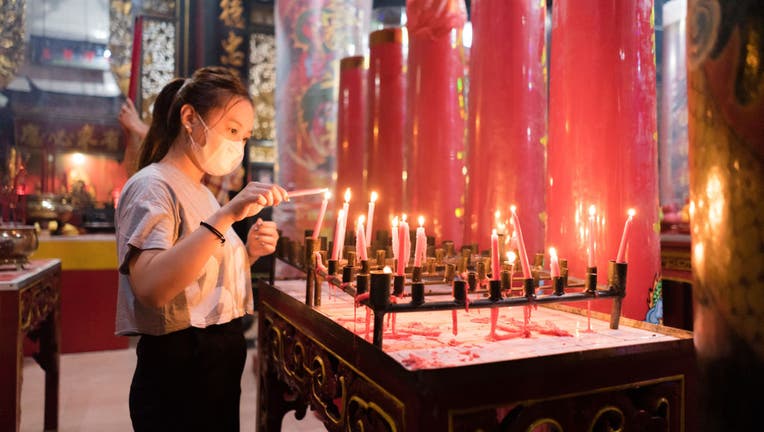 LOS ANGELES - Chinese Lunar New Year kicks off on Feb. 1, ushering in the Year of the Tiger.

The Lunar New Year is the most important annual holiday in China. Each year is named after one of the twelve signs of the Chinese zodiac in a repeating cycle. The Year of the Tiger follows the Year of the Ox.

The lunar-based celebration is connected to the second new moon of the year, which typically lands sometime between the end of January and mid-February. Records show that the half-month event dates back to the oracle bone readings from the 14th century B.C. when the Shang Dynasty was in power.

What the Year of the Tiger means

People who are born during the year of the Yang Water Tiger between Feb. 1, 2022 and Jan. 21, 2023, are prophesized to have agility and eloquence, according to the Chinese zodiac. The sign is also characterized as being brave, self-assured and competitive.

Many celebrating the new year are hoping the powers associated with the animal can finally bring the world on a path out of the pandemic. But with continued devastation from the novel coronavirus, celebrations have been muted, but still bring people hope.

Chen Lianshan, a Beijing university expert on Chinese folklore told the Associated Press, "The tiger is a protection against evil spirits and it can defeat demons and ghosts of all kinds, and the Chinese believe that the plague is one kind of an evil spirit."

It’s estimated that 2 billion people around the globe celebrate Chinese Lunar New Year, which is also known as Chunjie – the "Lunar New Year" or "Spring Festival" when translated to English.

How to celebrate Lunar New Year

In China, many families thoroughly clean their homes days before the Chinese Lunar New Year begins. This is usually done to rid homes of bad luck, according to Britannica. Food, trinkets and paper offerings are also extended to ancestors or deities, including whole chickens, fruit, tea, sculptures, incense and candles.

During the 15-day Chinese Lunar New Year period, many workers get seven days off to celebrate, according to National World. The celebrations typically conclude with a multi- or single-day lantern festival.

This year the celebrations also coincide with the Beijing Winter Olympics, which open near the end of the week-long holiday. The Chinese capital has been tightening controls to contain coronavirus outbreaks ahead of the sporting event.

The Games are being held inside sealed-off "bubbles," and organizers have announced that no tickets will be sold to the general public and only selected spectators will be allowed.

Some 85% of Chinese are now fully vaccinated, according to Our World in Data, and more Chinese have been traveling domestically this year, despite government warnings. Many people prepare to celebrate by buying red lanterns and other decorations for their homes, and food to mark the beginning of a new year.

Some 260 million people traveled in China in the first 10 days of the holiday rush starting Jan. 17 — fewer than before the pandemic but up 46% over last year. Overall, the government forecasts 1.2 billion trips during the holiday season, up 36% from a year ago.

Elsewhere in Asia, there were signs that celebrations might not be as subdued as they were last year. Despite ongoing pandemic restrictions, most people are now vaccinated with at least two shots in many of the region's countries.

In the old quarter of Hanoi, people flocked on the weekend to the traditional market to get decorations and flowers for the festival, known as Tet in Vietnam.

Vietnam's daily case count remains at about 15,000 new infections but its low hospitalization and death rate has allowed the country to reopen for business and cautiously resume social activities.

More than 70% of Vietnamese are fully vaccinated, and 80% have had at least one shot, according to Our World in Data.

Still, the country has canceled Tet fireworks and other large events to minimize risks this year.

In Thailand, where 69% of people are fully vaccinated, Bangkok decided this year not to hold traditional Lunar New Year celebrations in Chinatown for the second year in a row, but was going ahead with lighting seasonal lanterns on the district's main street.

In Singapore, Lunar New Year celebrations are more subdued due to coronavirus restrictions that allow residents to receive only five unique visitors a day, and preferably only one visit daily. The rules are likely to get in the way of the tradition of visiting relatives during the holiday.

The Associated Press and Fox News contributed to this story.