Orange County is celebrating the lives of the Altobelli's at Angel Stadium.

The memorial service for the three family members, who were among the nine people who died with Kobe Bryant in a helicopter crash on Jan. 26 in Calabasas, began at 4 p.m., John's brother Tony Altobelli announced on Facebook.

John Altobelli, 56, the longtime baseball coach for Orange Coast College in Costa Mesa, was remembered for his passion for the game, his friendship and penchant for one-liners from comedies that would leave him laughing to the point of tears.

His 46-year-old wife, Keri, was remembered for her outspokenness and devotion to her family, and their 14-year-old daughter Alyssa, a teammate of Bryant's daughter Gianna on the Mamba Sports Academy basketball team, was remembered for inheriting her father's work ethic as an athlete and a smile that would lift the spirits of her friends when they'd have a bad day. 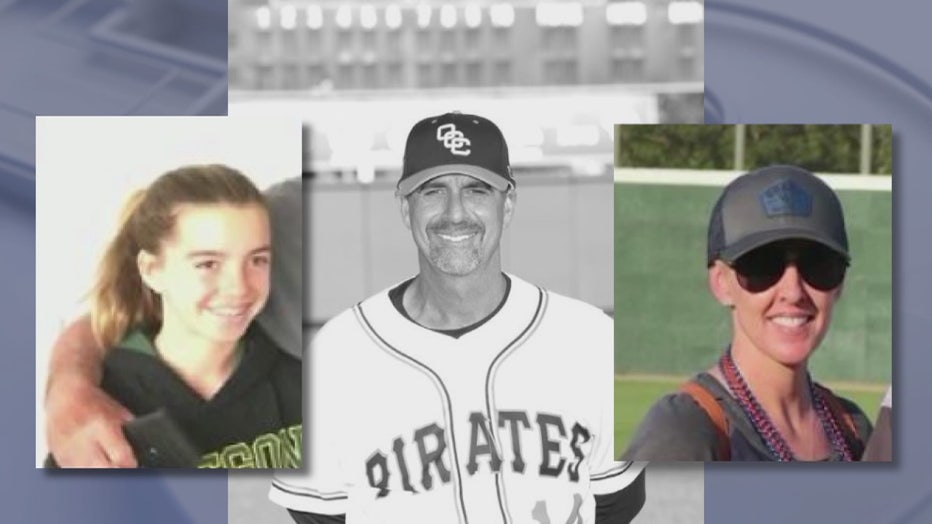 Altobelli's son, J.J., a Boston Red Sox scout, said the support his family has received since the Jan. 26 accident, was "truly amazing... It really shows the impact my dad, Keri, and Alyssa had... The legacy they left behind will continue to live on through all of us."

John Altobelli's best friend, Clarke Smith, said, "The same qualifies and character that guided John as a teacher on the field... was the same as a friend ... loyalty, trust, respect, work ethic and love. Those are powerful words, but Alto backed them up every day."

One of John Altobelli's former players, Jeff Piaskowski Jr., said, "He was strategic in his teaching. He gave you what you could handle and that was more than what you thought you could... He was a winner. He hated to lose more than he liked to win."

Keri Altobelli's brother, Derek Sanders, said his younger sister "was the closest person in my life... She was courageous, hardworking, caring, a friend, sister, and mother."

Sanders said his sister "was a force... an incredibly caring person who exhibited passion."

Sanders said Sunday became "my favorite day of the week" because of the family gatherings.

"Alto was nothing short of a saint," Sanders said. "He was a spectacular father and husband, and, frankly, we all idolized him."

Alyssa had "the most infectious laugh," Sanders said.   One of Alyssa's friends, Sammy Forbath, recalled how they grew up together on the same block and how often her friend had to say no when invited out to play because of practice.

"Alyssa was the funniest and most caring girl I've ever met," she said. "She always had my back no matter what... And she always did her best to make others happy."

Once, in the sixth grade, Alyssa did not like how the turtles were being used in the classroom so she took them home, Sammy said.  Buck Taylor, Kansas State's pitching game coordinator who coached at Palomar College from 2001-18, who became friends with Altobelli through the years as rivals, recalled how keen his baseball buddy was on texting emojis of himself.

"He loved his emojis," Taylor said. "There was Cubs fan Alto... Eyepatch Alto... Christmas ornament Alto... I saved them all. They were the best."

Taylor recalled once how they both got kicked out of a game and spent time together in the parking lot until it was over.

Taylor said after a tough loss he looked forward to calling Altobelli, but usually there was already a message of encouragement from his friend waiting for him.