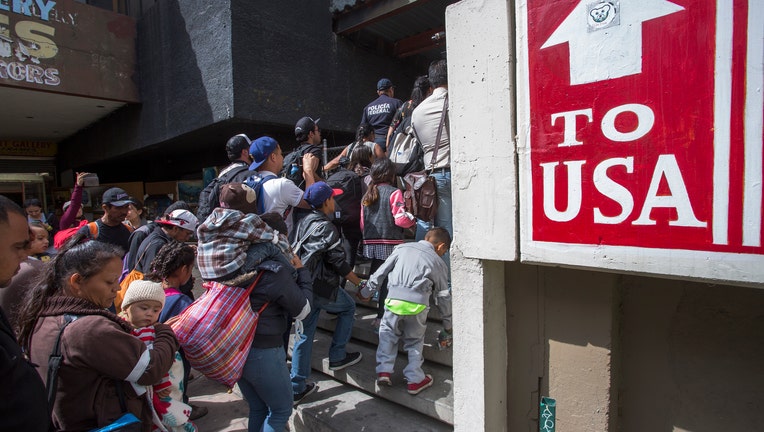 TIJUANA, MEXICO - APRIL 29: Members of a caravan of Central Americans who spent weeks traveling across Mexico walk from Mexico to the U.S. side of the border to ask authorities for asylum on April 29, 2018 in Tijuana, Baja California Norte, Mexico. M

MEXICO CITY (AP) - The Mexican government said Friday it is busing migrants who have applied for asylum in the United States to the southern Mexico state of Chiapas.

About 30,000 migrants have been sent back to northern Mexican border cities to await U.S. asylum hearings under a policy known as "Remain in Mexico" under which they have to wait for hearings months away. But few provisions have been made for them to be housed or seek legal representation, and many cities on the northern border are among the most dangerous in Mexico.

Mexico's National Immigration Institute said it used to move migrants south from Nuevo Laredo and Matamoros - two of the most dangerous cities on the northern border. Both cities are in northern Tamaulipas state across from Texas and are dominated by drug cartels.

The migrant agency said the goal of the busing is "to provide a safer alternative for those who do not want to remain on the U.S.-Mexico border." It did not say how many people had been taken by bus to Chiapas so far.

The Associated Press reported that in July, Mexico had begun busing some of the returned migrants out of Tamaulipas to the city of Monterrey, in neighboring Nuevo Leon state. Authorities said it was for their safety, but many were dropped off in that unfamiliar city in the middle of the night.

Officials gave no indication of how the migrants would return to the border from Monterrey for their court dates. That problem would be amplified for migrants bused to Chiapas, nearly all the way back to the Guatemala border.