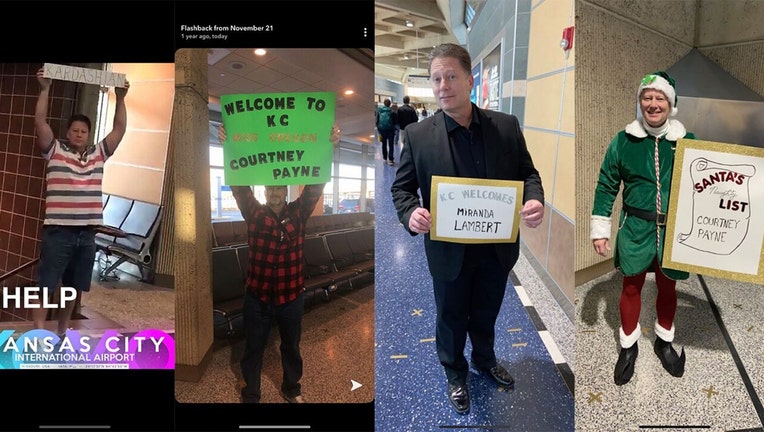 KANSAS CITY - Dads will be dads, even at the airport.

A young woman shared photos on Twitter that show how her dad picks her up at the airport. Fortunately for her, it seems like she’ll never have trouble picking him out of a crowd.

Courtney Payne uploaded several photos that show her dad waving elaborate signs for her at the Kansas City airport. In one photo, he’s even incorporated a costume, adding to the humor (or embarrassment) of the situation.

One image simply shows her dad waving around a sign that says, “Kardashian.”

Payne captioned the photos, “Every time my dad picks me up from the airport he makes a sign...”

One commenter wrote, “You are lucky to have such a lovely (and reliable) dad.”

“Oh my god,” wrote another who apparently witnessed Payne’s father’s antics firsthand. “I literally saw him in the elf costume yesterday working at Starbucks and I was like what???”

Another user just seemed excited to see their airport go viral, writing, “KCI is such a weird airport. Thank your dad for making it the good kind of weird while he's there.”

While another user seemed to shame their own dad with a tweet, “can you ask your dad if he will adopt me because my dad sucks.”