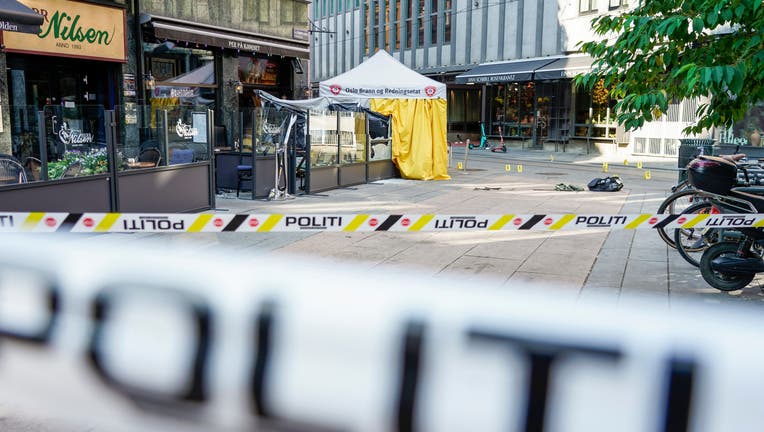 Shattered glass walls and left behind personal belongings are seen behind a police cordon on June 25, 2022, in the aftermath of a shooting outside pubs and nightclubs in central Oslo (Photo by TERJE PEDERSEN/NTB/AFP via Getty Images)

The Norwegian security service PST has raised its terror alert to the highest level. Acting PST chief Roger Berg called the shootings an "extreme Islamist terror act." He said the gunman, a 42-year-old Norwegian citizen originally from Iran who was arrested shortly after the shootings, had a "long history of violence and threats."

While the motive was unclear, organizers of Oslo Pride canceled a parade that was set for Saturday as the highlight of a weeklong festival. One of the shootings happened outside the London Pub, a bar popular with the city's LGBTQ community, just hours before the parade was set to begin.

Police attorney Christian Hatlo said the suspect was being held on suspicion of murder, attempted murder and terrorism, based on the number of people targeted at multiple locations.

"Our overall assessment is that there are grounds to believe that he wanted to cause grave fear in the population," Hatlo said.

Hatlo said the suspect’s mental health was also being investigated. 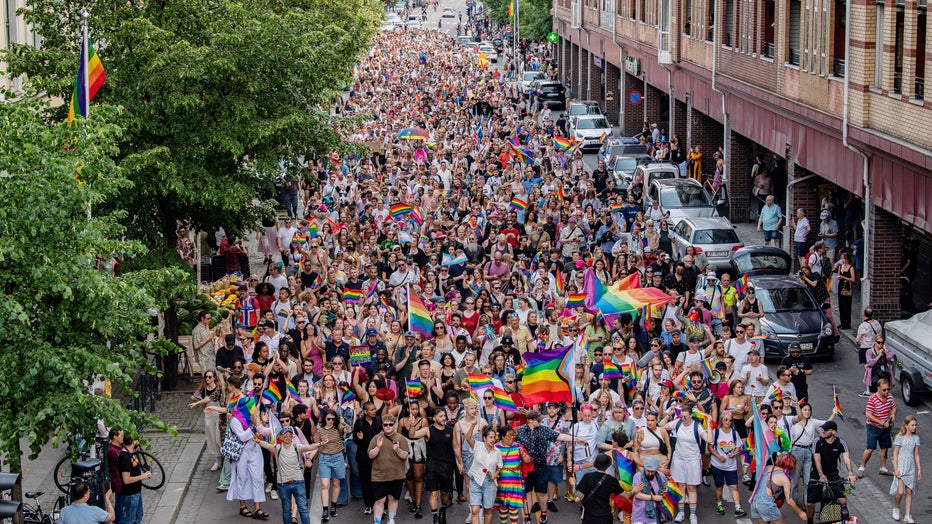 "We need to go through his medical history, if he has any. It’s not something that we’re aware of now," he said.

The shootings happened around 1 a.m. local time, sending panicked revelers fleeing into the streets or trying to hide from the gunman.

"I saw a man arrive at the site with a bag. He picked up a weapon and started shooting," Roenneberg told NRK. "First I thought it was an air gun. Then the glass of the bar next door was shattered and I understood I had to run for cover."

Another witness, Marcus Nybakken, 46, said he was alerted to the incident by a commotion in the area. 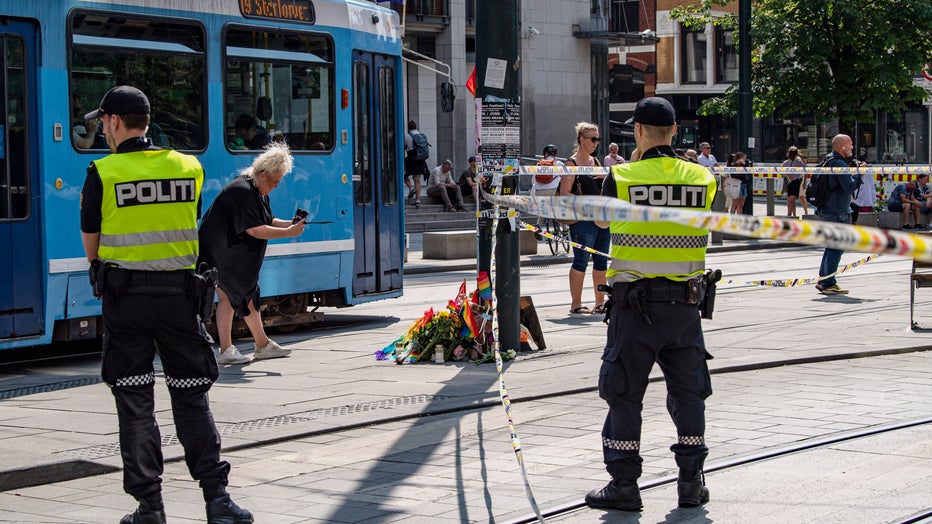 OSLO, NORWAY - JUNE 25: Police officers stand on patrol, as flowers and rainbow flags are placed along a street near a restaurant with windows shattered by the shooting near a gay club on June 25, 2022 in Oslo, Norway. (Photo by Rodrigo Freitas/Getty

"When I walked into Cesar’s bar there were a lot of people starting to run and there was a lot of screaming. I thought it was a fight out there, so I pulled out. But then I heard that it was a shooting and that there was someone shooting with a submachine gun," Nybakken told Norwegian broadcaster TV2.

Police inspector Tore Soldal said two of the shooting victims died and 10 people were being treated for serious injuries, but none of them was believed to be life-threatening.

Prime Minister Jonas Gahr Stoere said in a Facebook post that "the shooting outside London Pub in Oslo tonight was a cruel and deeply shocking attack on innocent people." 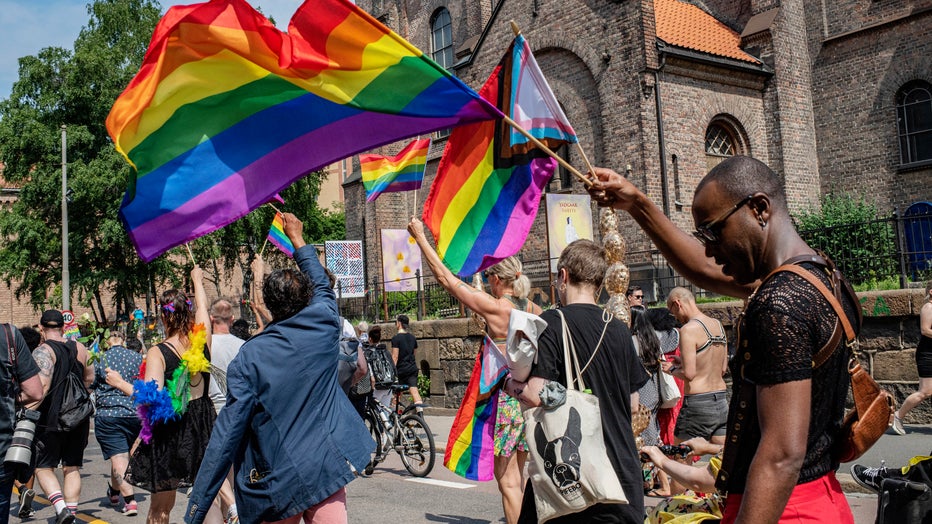 He said that while the motive was unclear, the shooting had caused fear and grief in the LGBTQ community.

"We all stand by you," Gahr Stoere wrote.

King Harald V also offered condolences and said he and Norway's royal family were "horrified by the night’s shooting tragedy."

"We sympathize with all relatives and affected and send warm thoughts to all who are now scared, restless and in grief," the Norwegian monarch said in a statement. "We must stand together to defend our values: freedom, diversity and respect for each other. We must continue to stand up for all people to feel safe."

Christian Bredeli, who was at the bar, told Norwegian newspaper VG that he hid on the fourth floor with a group of about 10 people until he was told it was safe to come out.

"Many were fearing for their lives," he said. "On our way out we saw several injured people, so we understood that something serious had happened."

Norwegian broadcaster TV2 showed footage of people running down Oslo streets in panic as shots rang out in the background. 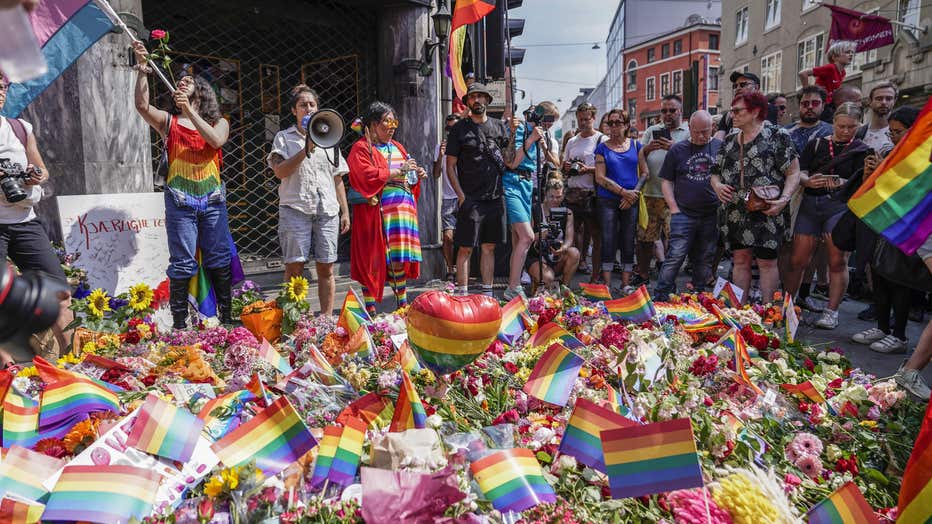 People with Pride flags stand near the London pub and lay flowers on June 25, 2022, in the aftermath of a shooting outside pubs and nightclubs in central Oslo (Photo by HAKON MOSVOLD LARSEN/NTB/AFP via Getty Images)

Investigators said the suspect was known to police, as well as to Norway's security police, but not for any major violent crimes. His criminal record included a narcotics offense and a weapons offense for carrying a knife, Hatlo said.

Hatlo said police seized two weapons after the attack: a handgun and an automatic weapon, both of which he described as "not modern" without giving details.

He said the suspect had not made any statement to the police and was in contact with a defense lawyer.

Hatlo said it was too early to say whether the gunman specifically targeted members of the LGBTQ community.

"We have to look closer at that, we don't know yet," he said.

Still, police advised organizers of the Pride festival to cancel the parade Saturday. 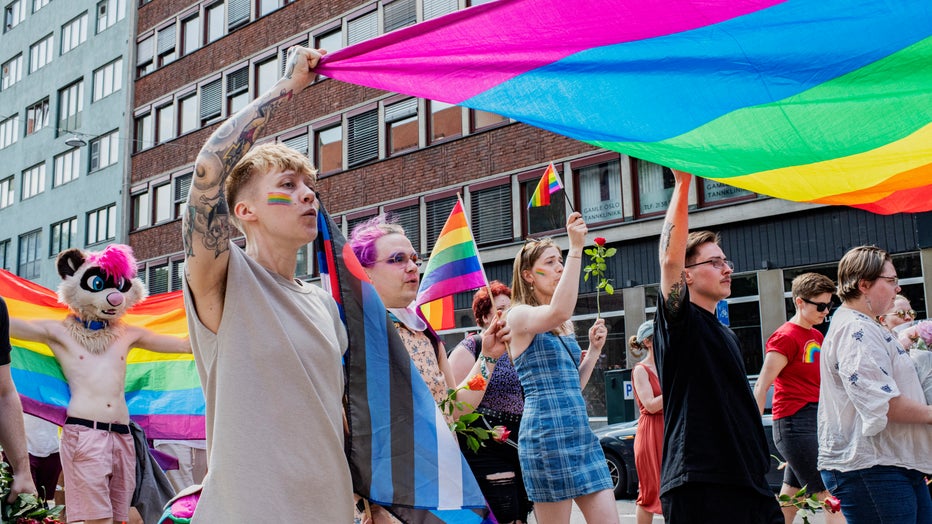 "Oslo Pride therefore urges everyone who planned to participate or watch the parade to not show up. All events in connection with Oslo Prides are canceled," organizers said on the official Facebook page of the event.

"It’s tough for the queer movement to experience this," he was quoted by TV2 as saying. "We encourage everyone to stand together, take care of each other. We’ll be back later, proud, visible but right now it’s not the time for that."

Norway has a relatively low crime rate but has experienced violent attacks by right-wing extremists, including one of the worst mass shootings in Europe in 2011, when a gunman killed 69 people on the island of Utoya after setting off a bomb in Oslo that left eight dead.

In 2019, another right-wing extremist killed his stepsister and then opened fire in a mosque but was overpowered before anyone there was injured.