DEARBORN, Mich. - One day after the Ford Wyoming Drive-in theatre said it would be reopening, its sign out front said it was closed.

After one show Thursday night, the drive-in's marquee read "Closed due to the governors executive order until June 12" on Friday morning.

June 12 is the newly revised date that Michigan Gov. Gretchen Whitmer's Stay home order had been extended to.

The 70-year-old staple had initially suspended programming due to COVID-19 and had been closed for more than two months. Then this week on Facebook, the theatre announced plans to reopen Thursday. According to the group, their box office was set to reopen at 10 p.m. last night, before regular hours would take effect on Friday. 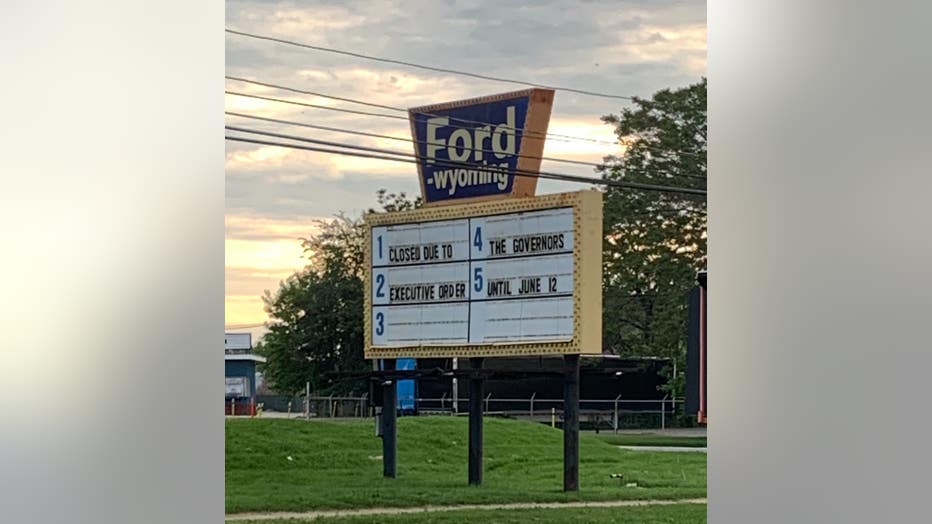 After reaching out to Dearborn Police who said they have read about it but don't know anything beyond that, the group shared a post on their Facebook page saying they were served a cease-and-desist order by law enforcement.

"Based on the Governor’s previous executive order stating that the stay-at-home orders would expire at 11:59 p.m. May 28, we endeavored to re-open as quickly as possible with showtimes starting at 12:05 a.m. May 29. Given our significant measures of social distancing and facility-wide sanitation, as well as the opening of other drive-ins throughout the state, we believed we could re-open successfully while adhering above and beyond to the federally recommended guidelines. It appears we were wrong."

The historical drive-in had promised to deploy new cleaning and sanitization efforts to keep both staff and customers safe and healthy during the COVID-19 pandemic.

The theatre had also planned to operate at only half capacity with one car being permitted to two speaker poles. However, even the drive-in speakers wouldn't be used, with patrons needing to use radio sound from their car or one they brought from home to listen in. Face masks were also requested.

Other drive-in theatres like the Canterbury Village drive-in is still set to open tonight.