Alzheimer's disease robs millions of people of their memory and their lives, and even after years of research, there's still no cure. A Phoenix-based company thinks it may have discovered a treatment that stops, even reverses the process.&nbsp;

PHOENIX - Alzheimer's disease robs millions of people of their memory and their lives, and even after years of research, there's still no cure. A Phoenix-based company thinks it may have discovered a treatment that stops, even reverses the process.

Janet Sizeler says the blue cap is changing her life. 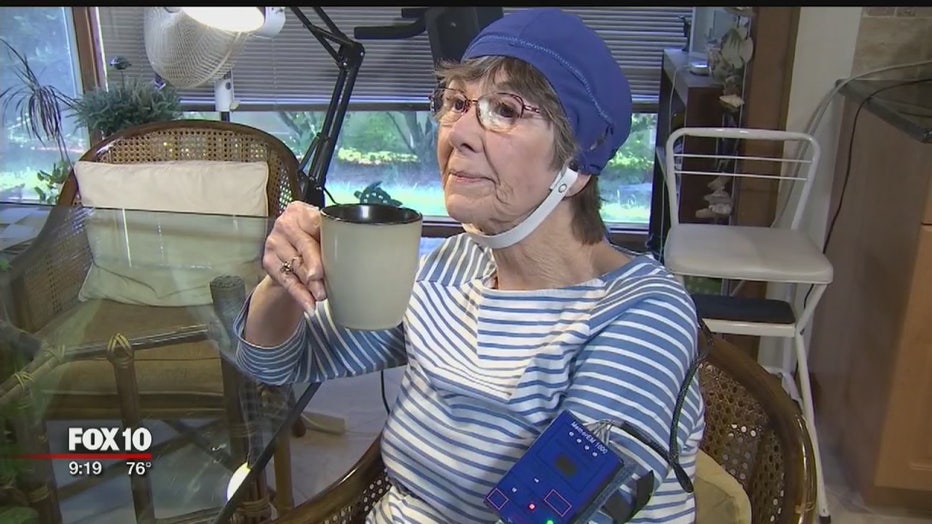 "[I] know I feel better wearing the hat, I don't feel hopeless, I don't feel so depressed, I have more energy, I actually feel normal," said Janet Sizeler.

Janet was diagnosed with Alzheimer's disease six years ago. For two hours a day, this MemorEM device beams cell phone waves into her brain.

"It sounds crazy I admit, but with this disease, it's so horrible, that those of us who take care of our spouses we'll try anything, I mean just about anything," said Larry Sizeler.

Janet's husband Larry says she's tried other experimental treatments and believes this one is working.

"I was surprised, very much so, tremendously so, nicely so, but yes," says Larry.

Its effect was also a surprise to Phoenix researcher Gary Arendash. In 2010, he welcomes us into his lab where he exposed Alzheimer's mice to the equivalent of decades of cell phone waves. While Arendash expected the mice would get worse, they instead got better, remembering how to swim through a maze.

"I must admit when we started, we were afraid to publish the work, it took a couple of years actually to get enough data to say hey, this is the real effect," explained Gary Arendash.

That effect comes from embedded antennas in the cap emitting electromagnetic waves at speeds of 200 cycles per second.

Arendash says after two months, participants in the first of its kind human trial did better on tests.

"Keep in mind over the course of a year, Alzheimer's patients typically decline by four points and yet we're getting a 4 point improvement," said Arendash.

"I always like to take everything with a little bit of caution," said Amanda Smith.

Byrd Clinical Research Director, Amanda Smith, says their study was encouraging but too small to prove it works. Over the years she's seen many drugs that worked in mice and fail in humans.

"A mouse blood-brain barrier is like Swiss cheese, it lets a lot of things flow through, and ours is kind of like Fort Knox, so nothing gets in," explained Smith.

She says brain scans and spinal fluid tests indicate this treatment may be different.

"She is becoming more normalized, there's no question," said Larry. "She is remembering restaurants, which she never remembered, didn't know what food she ate the previous night, now she does."

Both believe they're already seeing results.

"And if they try to take my hat away from me there's going to be a battle, I feel that strongly about it," said Janet.

Much more research is needed before the cap is approved by the FDA, but in the researcher's initial study, seven out of eight Alzheimer's patients saw significant improvement after just two months.