We're learning about the moments leading up to a deadly crash involving a Phoenix Fire Department truck in April 2019.

PHOENIX - A new report has detailed what led up to a deadly crash involving a Phoenix fire truck in 2019.

The crash happened in April, near Bethany Home Road and 29th Avenue, and three people, identified as 20-year-old Kenneth Collins, 19-year-old Dariana Serrano, and a three-month-old boy, died in the crash. All three were inside a pickup truck at the time of the crash.

"We don't get to have them in our lives anymore," said Sara Collins. "Chase was a good father. She was a good mother. They had good hearts."

Phoenix Police released the results of their investigation, along with some new surveillance video.

A Phoenix bus driver reacts as he drove past the crash scene.

A young couple and their baby were killed, three Phoenix firefighters were injured.

Witnesses reported the pickup with the family inside turned left in front of the speeding fire engine, which had its lights and sirens on.

According to police, at its highest speed, Engine 18 was going 69 miles per hour, that was two seconds before the crash.

Engine 18 braked, bringing the speed to 61 miles per hour at the time of impact, which is about 20 miles over the posted speed limit of 40 miles per hour on Bethany Home Road.

The driver of the crashed engine, Engineer Paul Kalkbrenner, told investigators he "believed he was within the fire department's standard procedures of 10 miles per hour over the speed limit."

When asked if he believed he was going less than 50, he said he "believed so." 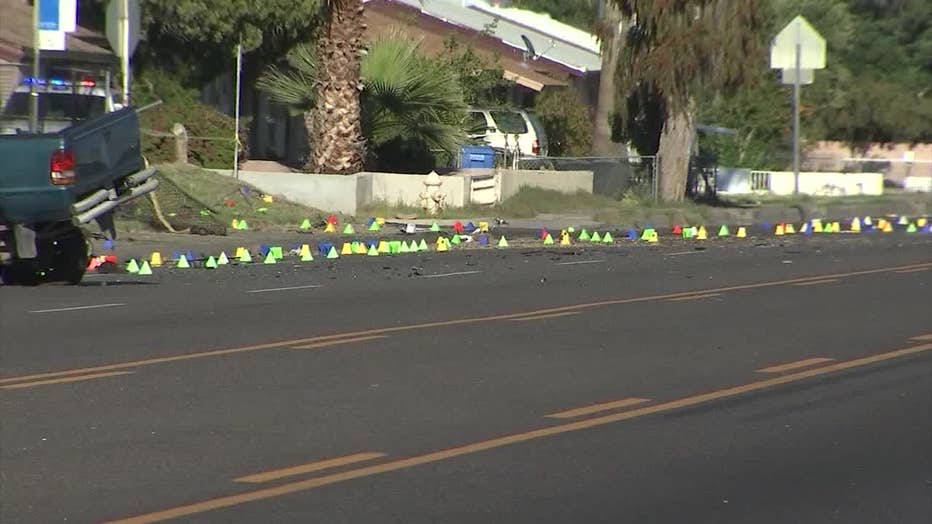 Firefighter Robert Golden said he saw a vehicle make "a left turn in front of them" and he "did not think that car saw us."

Each of the three firefighters in the second engine told investigators they ran straight to the overturned fire engine, and did not check on the family inside the pickup truck.

Investigators could not conclude why the driver of the pickup truck, Kenneth Collins, veered into the engine's path.

Police noted that Collins was driving on a suspended license and had marijuana in his system, but it's unclear how much or how long it had been in his system and impairment was not cited in the report.

Relatives of those who died filed a $25 million wrongful death lawsuit against the Phoenix Fire Department.

Investigators did not recommend any criminal charges to be filed.

According to Phoenix Fire Department policy, under favorable conditions, light traffic, good visibility and dry roads, a maximum speed of 10 miles per hour over the speed limit is authorized.

We asked Phoenix Fire officials if Paul Kalkbrenner, who is the nephew of the Phoenix Fire Chief, was disciplined for speeding. Officials said they could not comment due to pending litigation.