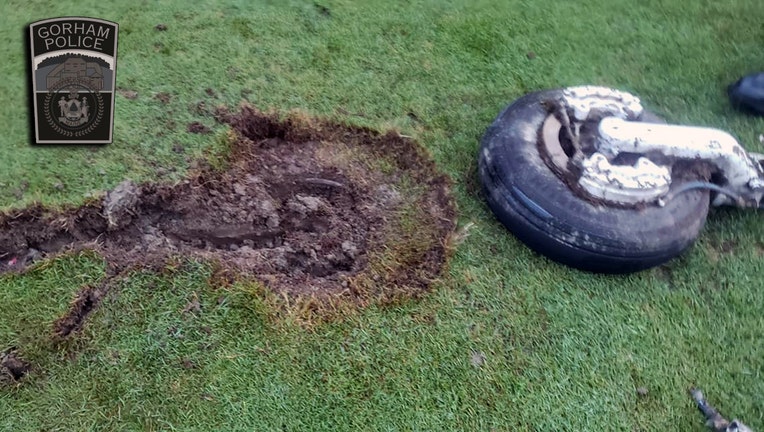 A wheel and strut fell from a twin engine plane and crashed onto a golf course in Gorham, Maine, Tuesday, July 20, 2021. (Via Gorham Police Department)

GORHAM, Maine - Calling it a "miracle" that no one was hurt, police in Maine said landing gear fell off a twin-engine plane and crashed onto a golf course on Tuesday evening.

A strut with a wheel and tire slammed onto the seventh hole fairway at the Gorham Country Club, Gorham Police Sgt. Ted Hatch said. The impact left a crater in the grass and soil.

"Just when you thought you have seen everything, things really do fall from the sky," Gorham Police wrote in a social media post showing photos from the scene.

The Piper Navajo was flying to Portland International Jetport from New York's Long Island but the pilot turned around after learning the gear had fallen off. The pilot then safely belly-landed the Piper at Long Island MacArthur Airport in Ronkonkoma, Hatch said. 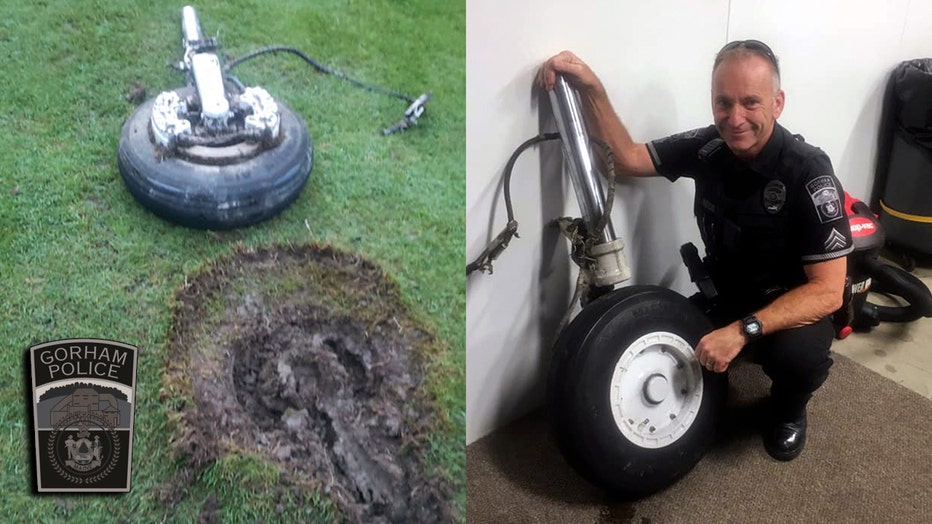 A police sergeant poses with the fallen landing gear (right) and the gear next to the crater it caused in a golf course (left), in Gorham, Maine, Tuesday, July 20, 2021. (Via Gorham Police Department)

"There were 2 miracles in this event. Number one, nobody was struck by this falling object when it fell on the 7th. fairway from the sky," police said on Facebook. "Number 2, the plane was able to do a belly landing and landed safely in Islip New York."

The Piper Navajo aircraft has retractable landing gear, according to the Aircraft Owners and Pilots Association website.

Gorham is a town just east of Portland.

With The Associated Press. This story was produced in New York City.