Trump impeached by US House on 2 charges

President Trump was impeached by the House on Wednesday, becoming only the third president to be formally charged under the Constitution’s ultimate remedy for high crimes and misdemeanors.

WASHINGTON - President Donald Trump is in sunny Florida after his historic impeachment, while plans for his speedy trial back in Washington remained clouded. Senate leaders jockeying for leverage have failed to agree on procedures for the trial.

Trump is still expected to be acquitted of both charges in the Senate, where Republicans have the majority, in what will be only the third presidential impeachment trial in U.S. history. Proceedings are expected to begin in January.

But the impasse between Senate Majority Leader Mitch McConnell and Democratic Leader Chuck Schumer over whether there will be new witnesses and testimony - along with House Speaker Nancy Pelosi’s refusal so far to send the articles of impeachment to the Senate - have left the situation unresolved.

“Nancy Pelosi is looking for a Quid Pro Quo with the Senate. Why aren’t we Impeaching her?” Trump tweeted, mocking one of the accusations against him before heading out for a two-week stay at his Mar-a-Lago resort for the holidays.

A six-term veteran of the Senate, McConnell is acting very much though he has the votes to ensure a trial uncluttered by witnesses - despite the protests of top Democrats Pelosi and Schumer.

“We have this fascinating situation where, following House Democrats’ rush to impeachment, following weeks of pronouncements about the urgency of this situation, the prosecutors have now developed cold feet,” McConnell, R-Ky., said late Thursday as senators left town for the year.

“We’ll continue to see how this develops, and whether the House Democrats ever work up the courage to take their accusations to trial." 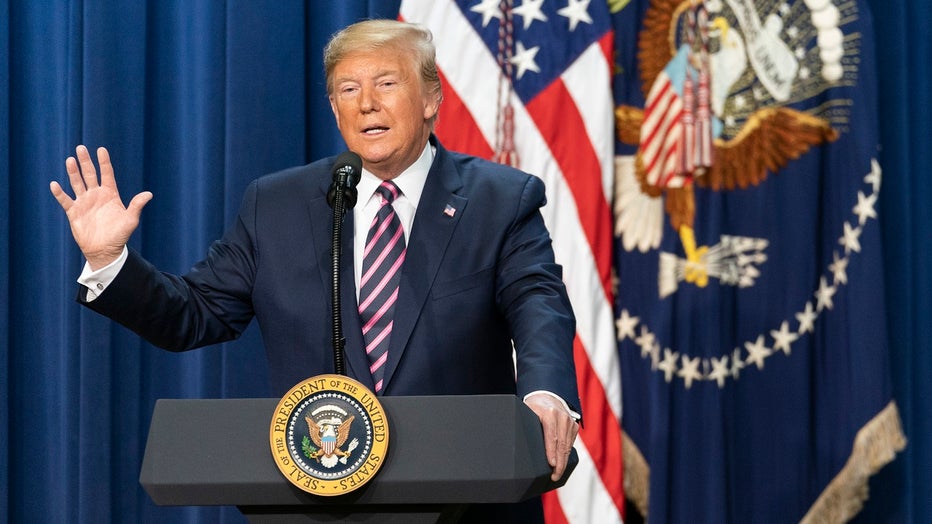 McConnell has all but promised an easy acquittal of the president. He appears to have united Republicans behind an approach that would begin the trial with presentations and arguments, lasting perhaps two weeks, before he tries drawing the proceedings to a close. The Senate will reconvene Jan. 3.

That has sparked a fight with Pelosi and Schumer, who are demanding trial witnesses who refused to appear during House committee hearings, including acting White House Chief of Staff Mick Mulvaney and former national security adviser John Bolton.

“They should have witnesses and documentation,” Pelosi told The Associated Press. “This could be something very beneficial to the country, if the facts are there.”

Schumer’s leverage is limited, though his party can force votes on witnesses once a trial begins. He appears to be counting on public opinion, and political pressure on vulnerable Republican incumbents like Susan Collins of Maine, to give Democrats the 51 votes they need.

McConnell isn't budging. After a 20-minute meeting with Schumer on Thursday, he declared the talks at an impasse and instructed senators to return on Jan. 6 ready to vote.

McConnell appears ready to impose a framework drawn from the 1999 trial of Bill Clinton, who was acquitted of two articles of impeachment. That trial featured a 100-0 vote on arrangements that established two weeks of presentations and argument before a partisan tally in which Republicans called a limited number of witnesses, including Monica Lewinsky for a videotaped deposition.

McConnell said Thursday: “I continue to believe that the unanimous bipartisan precedent that was good enough for President Clinton ought to be good enough for this president, too. Fair is fair."

There's a risk that Schumer's protests - which started Sunday with a letter to McConnell requesting four witnesses - could cement GOP unity. Endangered Republican senators including Cory Gardner of Colorado and Martha McSally of Arizona need strong turnout by the GOP base to win, and will be hard-pressed to take Schumer's side.

Trump, meanwhile, has been hoping the trial will serve as an opportunity for vindication. He continues to talk about parading his own witnesses to the chamber, including former Vice President and 2020 Democratic candidate Joe Biden and House Intelligence Committee Chairman Adam Schiff, D-Calif., who led the fact-finding phase of the impeachment investigation.

There is little appetite for witnesses among McConnell and other key Senate GOP allies, however.

What is an impeachment inquiry?

Impeaching a president is often misunderstood to mean their removal. It actually means the House has voted to bring one or more articles of impeachment and send the process forward.