The storm brought powerful winds and rain to many parts of the Valley on August 20.

PHOENIX - On the night of August 20, another monsoon storm brought rain and wind to the Valley and other parts of the state, sparking a 4,400-acre wildfire in the Superstition Wilderness.

SkyFOX flew over the fire on Aug. 26.

According to Tonto National Forest, lightning sparked a fire burning in the wilderness north of the Peralta Trailhead.

As of Aug. 26, the Superstition Fire has burned 4,430 acres and is at 0% containment. Smoke can be seen from the East Valley and Gold Canyon.

Areas near the fire will be closed starting Wednesday, including areas north and west of Peralta Canyon Road and the Peralta Trail.

The Valley has seen monsoon storms in recent days, some of which have caused damage, including a storm that seriously damaged a COVID-19 testing site in Mesa.

According to FOX 10's Kristy Siefkin, hail was reported near Sky Harbor Airport, with wind gusts of 60 miles per hour possible at one point during the storm. 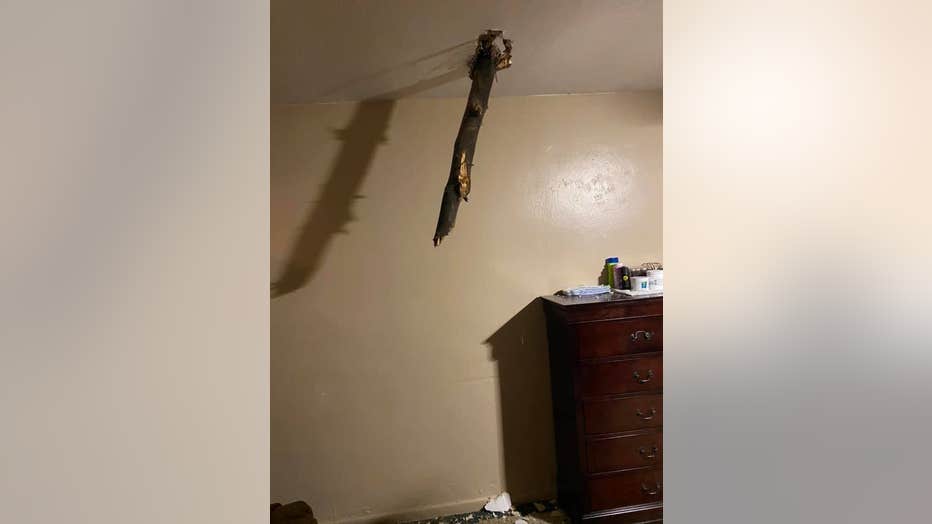 A tree branch that went through the roof and into a room at a home near 24th Street and Southern (Photo Courtesy: Cierra Bustillos)

There were also reports of downed trees across the Valley, including a downed tree that sent a branch straight through the roof and into a room at a South Phoenix neighborhood.

Bucket truck toppled over in the East Valley amid storm cleanup

The bucket truck was involved in cleanup efforts following a powerful monsoon storm that battered the Valley.

On August 21, cleanup efforts continue across the Valley, but it was also marked by some mishap, including a bucket truck that toppled at a Tempe apartment complex.

Yellowstone Landscape was called out to remove the tree on Friday morning, after he fell on the roof of the apartment complex.

"I woke up and I saw something fell down on the walkway," said one resident at the complex.

As the tree removal was underway, the big bucket truck tipped over. A foreman onsite, who did not want to appear on camera, told FOX 10's Stephanie Olmo that the ground was just too saturated, resulting in the toppling.

"That was a very unique situation this morning because it encompassed not only the truck being damaged, it got into the tree, if I understand that correctly, and it’s not as often as it could be and in a location like where it happened," said John Doukas with Quick Pik Towing.

The powerful storm that moved through the area Thursday night downed trees and flooded homes.

The storm didn't just down trees and damaged homes in the Valley. The rural town of Stanfield, located to the west of Casa Grande, saw homes destroyed as a result of the storm. In addition, flooding was reported in the area.

All over Stanfield, debris can be seen scattered, whether it is hanging on top of powerlines, or lying in the streets. Trees are laying on their sides, with roots exposed. Some homes no longer have their roofs intact.

When Rodriguez walked outside her home on the morning of August 21, she saw a 50-year-old tree ripped out of the ground, and her shed crushed beneath it.

"Lucky it missed my house. I still have a roof over my head," said Rodriguez.

Rodriguez's neighbors, however, were not so lucky. Their roof collapsed, and rain poured inside, flooding the homes.

"It started hailing, and then it started learning on the side," said Manuel Soto. "We had to break out pots and pans."

The storm damaged dry wall and insulation, and the Sotos have been working on cleanup efforts since the night of August 20. They don't want to stop, in case the next storm hits again.

The storm brought a lot of rain, as well as some damages to Phoenix.

SRP officials reported power outages across the Valley as a result of storm activity. FOX 10 has learned from SRP officials that more than 28,000 people were without power at one point.