It's Presidents Day weekend! But do you know how this federal holiday came about?

WASHINGTON - Presidents’ Day is a federal holiday in the U.S. celebrated on the third Monday of February each year.

The day recognizes George Washington’s birthday, as well as honors the history of the American presidency and all of those who have served as our nation’s leader.

From Abraham Lincoln’s Gettysburg Address to Ronald Reagan’s "tear down this wall" speech more than a century later, here are some famous presidential remarks of the past.

The two-minute speech was given by President Abraham Lincoln following the Battle of Gettysburg during a cemetery dedication for the Union war dead on Nov. 19, 1983. While he wasn’t even the main speaker for the event, Lincoln’s brief message on a "new birth of freedom" has come to be regarded as one of the most eloquent and memorable speeches in U.S. history.

"Four score and seven years ago our fathers brought forth, on this continent, a new nation, conceived in Liberty, and dedicated to the proposition that all men are created equal," Lincoln said, in part.

President Franklin D. Roosevelt gave a well-known speech to a joint session of Congress on Dec. 8, 1941, a day after the Japanese attacked Pearl Harbor and led to the U.S. entering World War II. The first line is often the most quoted: "Yesterday, December 7, 1941 — a date which will live in infamy — the United States of America was suddenly and deliberately attacked by naval and air forces of the Empire of Japan." 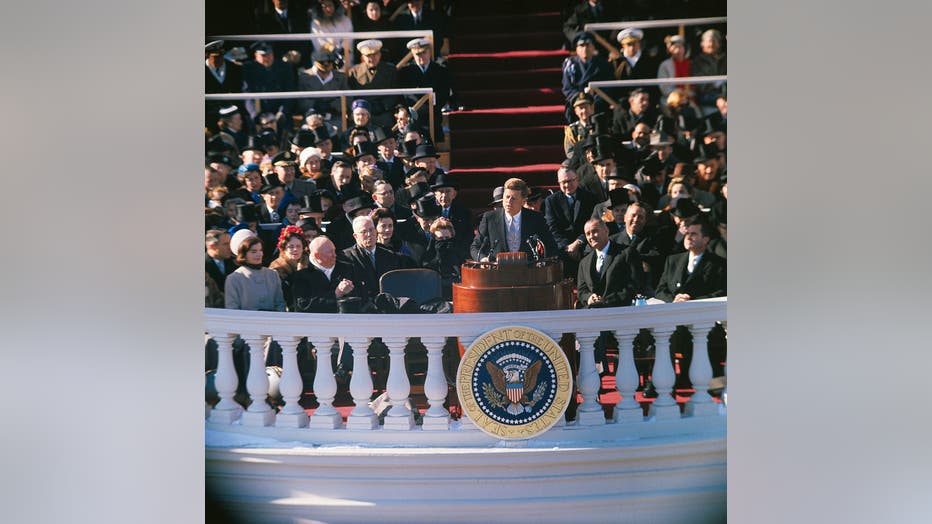 In his first 14-minute speech as commander-in-chief, President John F. Kennedy in 1961 inspired kids and adults alike to see the importance of public service and civic action with the memorable line: "My fellow Americans: ask not what your country can do for you—ask what you can do for your country." Kennedy spoke to whom he called "a new generation of Americans— born in this century, tempered by war, disciplined by a hard and bitter peace, proud of our ancient heritage."

Lyndon B. Johnson’s ‘we shall overcome’ speech in 1965

On March 7, 1965, a day that became known as "Bloody Sunday," civil rights leader John Lewis and over 500 marchers were attacked while planning a march from Selma to Montgomery to register African Americans to vote. Eight days later, President Lyndon B. Johnson addressed a joint session of Congress to urge the passage of legislation guaranteeing voting rights for all.

Using the phrase "we shall overcome," borrowed from Black leaders fighting for equal rights, Johnson declared that "every American citizen must have an equal right to vote" and that "what happened in Selma is part of a far larger movement which reaches into every section and state of America." Johnson later signed the Voting Rights Act of 1965 into law on Aug. 6.

Ronald Reagan’s ‘tear down this wall’ speech in 1987

President Ronald Reagan traveled to Berlin, Germany, in 1987 to commemorate the 750th anniversary of the city’s founding, and at that time, the Berlin Wall had divided the city in half for nearly 26 years — serving as both a physical divider and striking symbol between the communist, Soviet bloc and democratic, capitalist bloc. During a speech, Regan stood just 100 yards away from the barrier and uttered arguably the most famous words of his presidency: "Mr. Gorbachev, tear down this wall."

President George W. Bush was visiting an elementary school in Florida on the morning of the Sept. 11, 2001, terror attacks. Determined to return to the White House, he eventually flew back on Air Force One to Washington, D.C. and gave a prime-time address from the Oval Office to speak in more detail to a frightened nation.

"Today, our fellow citizens, our way of life, our very freedom came under attack in a series of deliberate and deadly terrorist acts," Bush said. "....Thousands of lives were suddenly ended by evil, despicable acts of terror. The pictures of airplanes flying into buildings, fires burning, huge structures collapsing, have filled us with disbelief, terrible sadness, and a quiet, unyielding anger. These acts of mass murder were intended to frighten our nation into chaos and retreat. But they have failed; our country is strong."