Running around the baseball diamond is a typical sight at Chase Field, but on Sunday, there will be something very different in the outfield, as the Drone Racing League swoops into Phoenix, looking to showcase their growing new sport. FOX 10's Matt Galka reports.

PHOENIX - Running around the baseball diamond is a typical sight at Chase Field, but on Sunday, there will be something very different in the outfield, as the Drone Racing League swoops into Phoenix, looking to showcase their growing new sport.

Most of the drones will be going faster than the cars in the HOV lane on the I-10, doing 100 mph making hairpin turns, and all that adds up to some fast fun, as well as a few crashes.

Founded in 2015, the Drone Racing League, or DRL, is part Star Wars and part Nascar, and Sunday's event at Chase field marks their first-ever race in a baseball stadium.

"We have 12 of the top pilots in the entire world, and they're going to come here Sunday night and race for the winner of this level," said Ashley Ellifson, the Chief Operating Officer for DRL.

Ellifson has been involved with the league from the start, seeing an opportunity as drones become more popular with the public.

"We saw that about four or five years ago and thought there is a sport here and it's an exciting thing to watch, and someone needs to make it easy to see or easy to follow," said Ellifson.

Keeping up with the flying machines is not easy. Typically, they're cutting through the air at more than 90 miles per hour, but 2018 DRL champion Paul "Nurk" Nurkkala and all of the other pilots see exactly what's in front of the drone. DRL uses first-person view goggles for pilots to better fly the machines.

Every drone is made with the same specifications, meaning winning and losing is more about the pilot's skill.

"At 90 mph, every milisecond that we delay corresponds to about eight feet, and that's about the width of one of the gates that we fly through," said Nurkkala. "So you have to be on it. It has to be super fast. There has to be no latency in the system, and make those decisions as quick as you can"

Ellifson helps design the courses, with the drones flying through specific checkpoints around the stadium.

"It's really about how do you design a course that is 100% in front of the live audience, how do you bring this right in front of them, so you can really feel the speed, and the wind and it'll go right about their heads."

The League looks to continue to build on growing popularity and take off even more, with breakneck speeds and vivid visuals leading the way\.

"As we continue to learn more and more about what is exciting and powerful and fun about drone racing, the more we can build that out and show people how cool this sport is," said Nurkkala.

They bring about 600 of the racing drones to each event. The event happens at 7:30 p.m. Sunday. Many of the events are streams, and the first stream this season got nine million views. 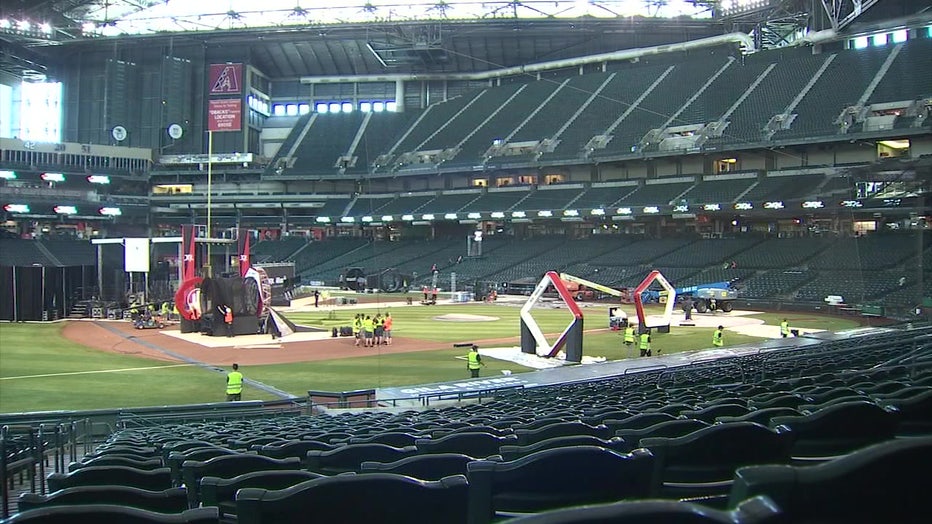